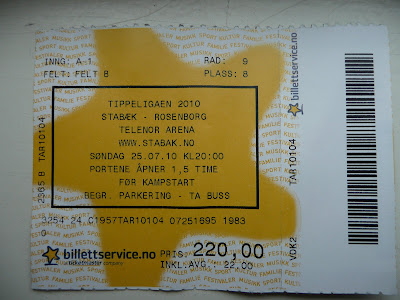 Just one day after my glorious basking in the sun at Kjelsås, I am standing in my jeans and jacket, umbrella covering me from the rain, waiting for bus 31(E) to take me to the Telenor Arena to see a game in the Tippeligaen, Norway’s First Division. The bus ride takes just 15 minutes, but then I have to wait more than 20 minutes in line to buy a ticket for NOK 220 (27.50 Euro), which is the cheapest! As the ticket office is run by Ticketmaster, it comes as no surprise that the ticket itself is boring. And they could have done so much better; just look at the cover of their match program! 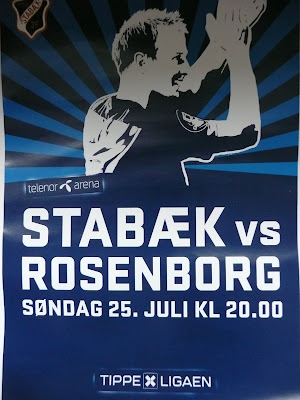 Although happy that the stadium is covered, it is a mere 13C/55F and raining, I am a little shocked that it is actually an indoor stadium. Although this makes sense in the harsh Norwegian climate, it is only the second time in my life I see a professional football team play indoors (the other being the Michigan Bucks).

The official capacity of the Telenor Arena, the new home ground of Stabæk Fotball which only opened in 2009, is 15,600 for football games (23.000 for concerts). This evening it is half full; the official tally is 9.479. This is probably in part because the game is live on tv. That said, almost half of the people are supporters of Rosenborg, the Norwegian powerhouse from the northern city of Trondheim, which is also on top of the league today. While many probably live in Oslo, a couple of thousand must have made the 500 km (300 miles) journey for this game. 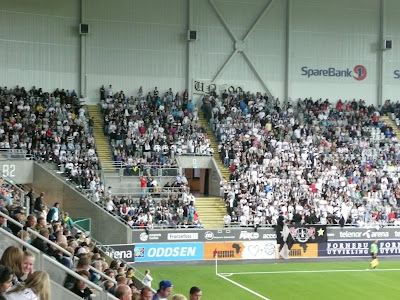 Stabæk is the second biggest team in Oslo, behind Vålerenga, certainly now Lyn Oslo went bankrupt (fortunately I saw them several years ago). They are in the middle of the league and seem to have a modest fan base, with the ‘ultras’ behind one goal, opposite from me, and some enthusiastic kids behind the other. At times they chant together, though the answers from my side sound a bit weak. 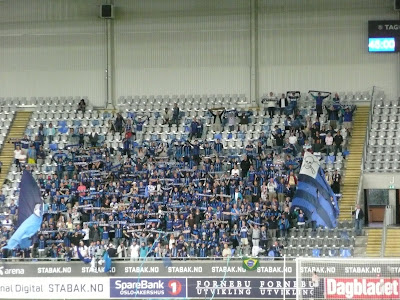 From the beginning Rosenborg is the better team, having most of the ball and chances. Their passing game is fast and quick, which is undoubtedly helped by the artificial grass of the Telenor Arena. They create various half chances, but often the final pass is missing or the finish is weak and imprecise. Stabæk mainly tries to counter, but often keeps too many players back to create real chances. 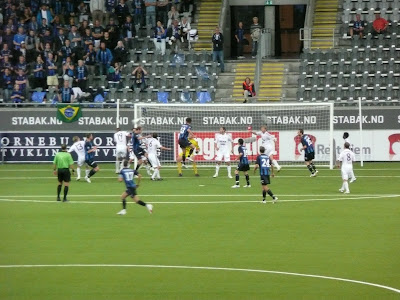 The atmosphere is a bit sterile, which might be the odd setting. While both groups of fans sing for most of the game, it is never really loud. The game slowly starts to become boring, which is mostly the fault of Rosenborg, which never shoots at goal and sees every attack end with another pass too much. The home team has only sporadic chances. In the 23rd minute they play a beautiful one-two pass, but it is horribly missed. The half time score is 0-0, which is way too little for Rosenborg. 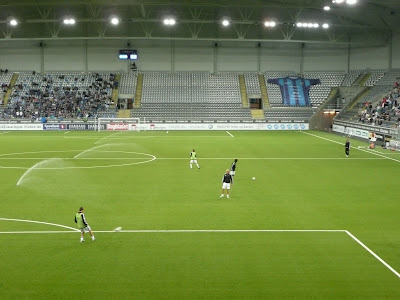 After some much needed liquids for both the pitch and me at half time, as well as yet another wiener in soft taco, the most filling snack in the stadium, the second half starts with the music stopping and the home fans singing their song (not too loud though, we are Norwegian!). As in the first half, Rosenborg creates the chances and then squanders them by not shooting. Stabæk’s play is deteriorating fast… poor passing, dumb defending, this must end badly, even against a team that refuses to shoot. And in the 65th minute someone finally shoots, the goalie saves, but the rebound is scored: 0-1. 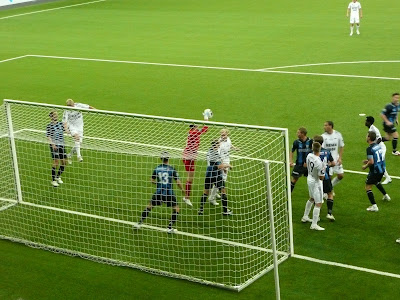 Unfortunately, the goal makes the game even more boring. Although Stabæk increases the pressure, though is unable to create many chances, Rosenborg seems content with the 0-1 and hardly tries to counter. This notwithstanding, most of the (few) chances are still for Rosenborg. But then, totally unexpected, Stabæk finally plays a good through ball, which is coldly finished, 1-1, and the crowd goes wild (Norwegian style).


With only six more minutes to play, Stabæk seems to have pulled off a stunner against the league leaders. But that is not what the terrible number 23 (Vegar Hedenstad) has in mind, who until then had mainly excelled in screwing up every single Stabæk corner kick. While being the last man, some 20 meters from his goal, he plays the ball in the feet of the Rosenborg striker, who simply walks a couple of meters and scores: 1-2 in the 89th minute. Game over! 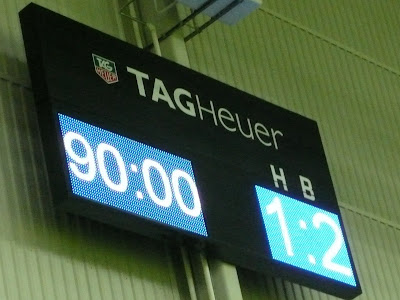 In the end, 1-2 is a fair result. Although Rosenborg played poor, and didn’t pressure for the second goal directly, they were much better than Stabæk. On a good day, Rosenborg is among the better teams of the small leagues (e.g. Denmark, Netherlands, Norway, Portugal, Sweden), while Stabæk is a decent team in the Norwegian top league. And although the club has a decent amount of fans and a brand new stadium, I didn’t really feel the atmosphere in the Telenor Arena. Too sterile for me.
Posted by Grondhopper at 11:43 PM