The Nashville Metros have been on my radar for some time, so when my friend JC visited me, and asked me whether we could see a game, I was very happy to take him back to his old city to see, what I later found out, ‘the longest continuously operating outdoor soccer club in the United States.” Whether this is true or not doesn’t matter much to me. Founded in 1989 the Nashville Metros are definitely one of the oldest teams I have seen in the US. 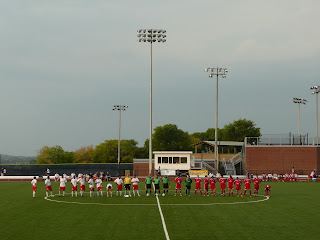 The Metros play their games at E.S. Rose Park, where the football and soccer teams of Belcount University normally play. The ‘stadium’ consists of one small bleacher, covering only part of one long side, and is situated on a hill, partly overseeing the city of Nashville. As we arrive, minutes before kick-off, high school students are running track around the pitch, and only stop when the national anthem starts (played through one of the worst stereo systems ever). 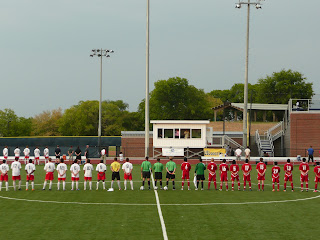 Tonight’s game is against the West Virginia Chaos, which didn’t bring any fans (to be fair, it is an approximately 400 miles/650 km drive). Despite the fact that the game is free, there are at best 100 people on this sweltering hot summer evening. Initially the people are mainly white middle class, including some of the players’ wives/girlfriends, but later various black and Hispanic supporters join – the latter seem largely related to the many Hispanic players of the home team. 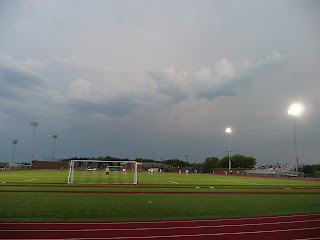 The game is played on Astroturf, which is quite normal in the Premier Development League (PDL). In the 3rd minute the Metros play a great through ball, but the striker freezes and passes the ball from roughly 7 meters softly in the hands of the goalie. Two minutes later a good attack of the visitors is saved well by the Metros goalie. 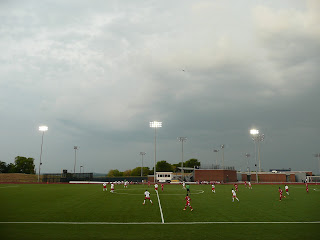 After some 20 minutes of play the wind starts to pick up, and it looks like we will be hit with torrential rains. Surprisingly, that doesn’t happen, but the extreme wind makes playing soccer very difficult; particularly for these players, with rather modest skills. The Chaos can't get the ball out of its own half, while the Metros cannot pass it accurately with the wind. The most exciting thing is the call for “ball managers,” as they have no ball boys around the pitch. With the exception of two good counter attacks of the visitors, there is little to report about the rest of the first half: 0-0 at half time.

The second half is roughly like the last part of the first, even though it has cooled down significantly and the wind is no longer so disruptive. The level of play get poorer and poorer, as the Chaos sits further back and the Metros see most of their attacks end in useless dribbles. In the 53rd minute a good attack of the Metros is shot just wide, while five minutes later the visitors go alone at goal and slowly shoot over the goal. 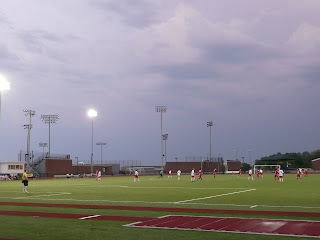 Like the rest of the people, we also start to increasingly focus on our own conversation, as the level of play drops further and further. Both teams create some decent chances, in part because there no longer is a midfield and both defenses are weak, but no one is able to pull the trigger. 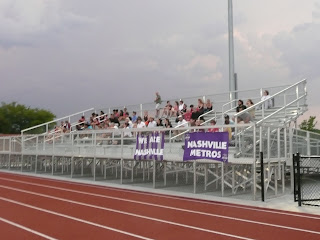 The last fifteen minutes are dominated by the Metros, who see a great attack over right be missed by two consecutive strikers, a wrong pass tipped over by the goalie, and a good attack saved by the goalie because of a bad first touch. The Chaos get only one really big chance, in the 82nd minute, when a player goes alone in the box and shoots cool and collected straight at the goalie. Final score: 0-0. 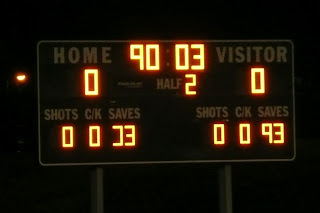 The Nashville Metros reminded me in many ways of the Cleveland Internationals: they exist for many years, still play at the stadium of a local university, in front of few real fans, and without (the infrastructure and appeal to) charging an entrance fee. The Internationals folded in 2010, and I really hope the Metros can do better. At the game they sold some replica shirts of their new (purple) jerseys, among others to JC, but to become a serious team, even in the PDL, they will have to do much better.
Posted by Grondhopper at 6:29 PM 1 comment: