The cherry on my groundhop Sundae was going to be a game of the Philadelphia Union, the newest member of the MLS, America’s First Division. When I planned my trip, two weeks earlier, the game was already sold out, so I resorted to Stubhub, where I bought a ticket for $61.94 (of which 1/3 was wasted on express mailing an electronic ticket). Fortunately, a nice Union fan named Will gave me his ticket, so that I have a nice souvenir of what turned out to be a historic game. 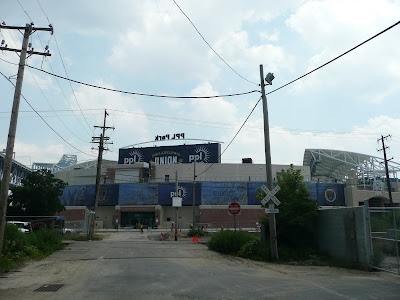 While having breakfast in University City, I read in the local newspaper that at 2 PM, three hours before kick-off, PPL Park was going to be officially opened by a host of senators, mayors and other local celebrities. It turned out that this was the inaugural game of the new stadium of the Philadelphia Union. So, I made my way to the stadium early, saved $15 by parking in a street opposite of the stadium, and walked over to hear some of the speeches. 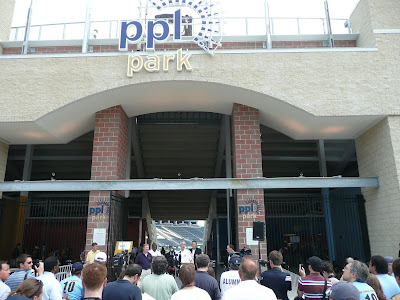 As I got bored of the speeches, I decided to walk around the stadium, where there were various stands of businesses and restaurants. My Portland Timbers shirt led to a lot of positive responses; the guys of the Toyota stand even wanted to go on a picture with me (as Toyota is the shirt sponsor of the Timbers). Even though the game was still three hours away, there were already some 2.000 people tailgating. 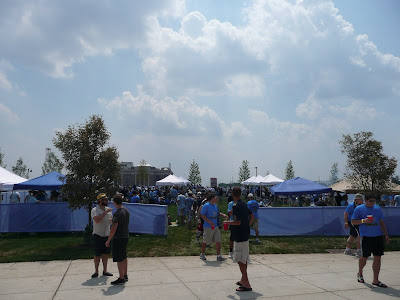 At 14.30 I took shelter from the excruciating heat in the well-stocked fan shop, where together with some 50 others I watched Argentina-Mexico. Unfortunately, after 30 minutes they put off the tv and told us to go into the stadium… where they unfortunately did not show the game until the last minutes. I didn’t take my place in the stand until ten minutes before kick-off, because it was so hot. In fact, just before kick-off the sprinklers were put on at the pitch, even though it remained very dry. 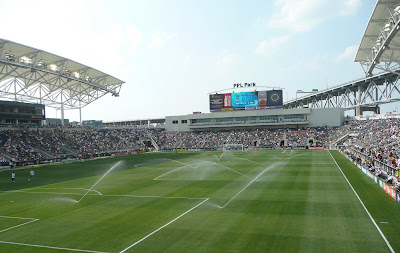 I was sitting (although in fact we were standing during the whole game) at a stand behind one of the goals, surrounded by the “Sons of Ben”, referring to Ben Franklin, a group of more than a thousand ultras wearing sky blue shirts with the slogan “Ad finem fidiles”. 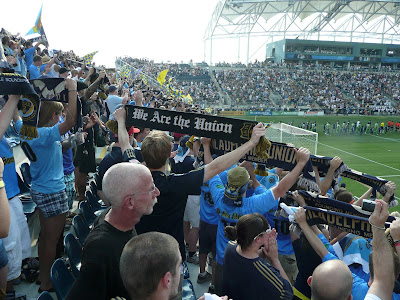 After a collective singing of the national anthem, of course upon the command of the stadium speaker, the game finally started. As said, the stadium was sold out, 18.755 people, including probably some 100 Sounders fans (impressive given the distance). 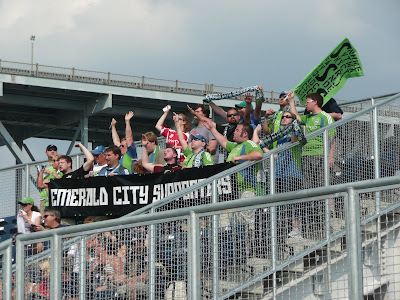 Despite the heat, the game started with a high pace. The Union put on the pressure, while the Sounders seemed to have come for just one point, playing extremely defensively with all the time 6-7 people behind the ball. The fans around me were mostly focused on the beer guy, shouting chants like “Where’s the beer guy” and “Let’s go beer guy”. The most humorous fans were a small group who had brought three huge signs with numbers, just as jury members have in gymnastics, which they held up whenever a Seattle player dived (according to them). 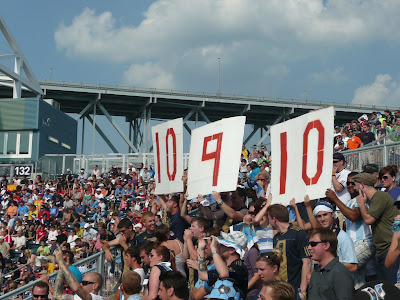 While the Union had most of the ball, the few small chances were for the Sounders, who had a couple of too soft shots at goal. Because of the heat the pace of the play went down, which suited the defensive guests well. As I was just to make my way to the concession stand, to get some highly needed fluids, the sneaky Sounders scored on a break: 0-1. This would also be the half time score. 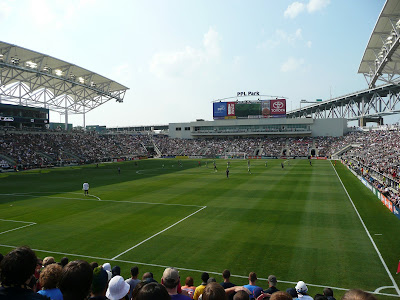 The second half started with increasing pressure of the Union, which led to a soft penalty in the 55th minute, which was converted: 1-1. Just five minutes later the Sounders got their penalty, which was missed by their ‘star’ Freddie Ljungberg. This lifted the spirits of the Union even further and they started looking for another goal, which came in 79th minute, after a scrimmage in front of the Sounders goal. Only minutes later they scored another, 3-1, and the stadium went crazy.
After that the game was over: Seattle hadn’t attacked all game and was never going to get back. Hence, the fans enjoyed the last minutes by chanting and singing. The sun no longer felt burning and the thirst was temporarily forgotten. The Union had beaten the Sounders, the team against which they lost their first official MLS game. What a way to inaugurate the fantastic new home ground. 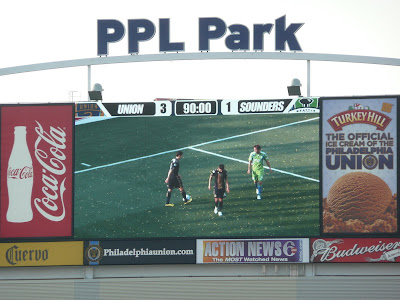 After the final whistle I got some water and made my way back to my car. I really enjoyed the game and the Union fans… clearly, there is a perfect basis for ‘soccer’ in Philly! I will undoubtedly return, maybe that time to support the Timbers. Within 30 minutes I was out of the city and on the motorway, on my way back home. I would arrive there the next evening. It was a groundhop of three games, taking me through nine states, while driving almost 2.900 km (1.800 miles).
Posted by Grondhopper at 9:02 PM