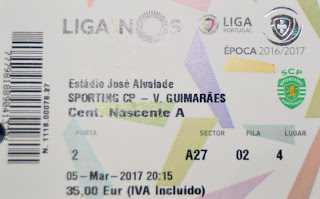 After a true groundhop experience at Fabril in the early afternoon, and a nice early dinner with RT, I took the metro (green line) to Campo Grande and follow the green-white masses to the Estádio José Alvalade, home to Sporting Clube de Portugal, one of the “Big Three” in Portuguese football. 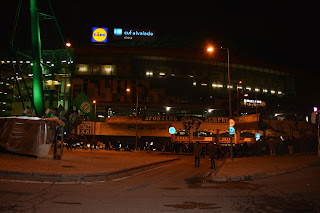 Estádio José Alvalade was built in 2003 for the UEFA Cup 2004 and still regularly hosts home games of the Portuguese national team. It’s an ultra-modern stadium, part of a broader commercial zone that includes a mall, and holds 50.000 people. It is surrounded by small stands selling merchandise as well as food and has some fan graffiti on the outside. 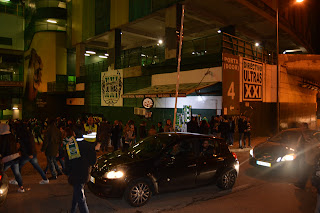 Tonight’s game is between Sporting Lisbon and Vitória de Guimarães, to of the top teams in the Primeira Liga (First Division), the highest level of professional Portuguese football. At that time both teams are in the top-5 of the league. 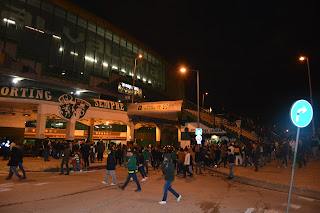 I try to buy a ticket but first get to the wrong ticket office. After asking someone else – remarkable how many people in Lisbon speak English reasonably well – I line up and decide to live a little, getting a more expensive ticket: €35. It puts my reasonably at the center of the pitch in the second row. 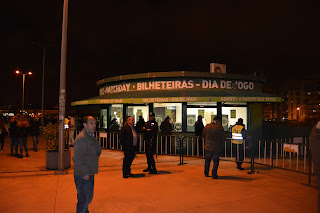 I enter the stadium just before kick-off, catching the last part of the commercial pre-game show and the much more impressive singing of the club song (to the tune of Frank Sinatra’s “My Way”).

The stadium is almost totally full – I later hear the official attendance was 41.822 – and almost everyone has a green-white jersey or scarf. The audience is predominantly male, but there are quite a lot of women (rarely without a man though), and seem more middle class than working class – which might be, in part, because I am in the more expensive seats. The ultras have impressive banners throughout the stadium. 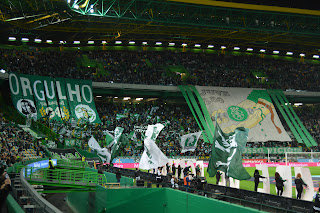 There is a small group of away supporters, I guess a few hundred, tucked away in the top corner of the stadium. They have made an almost 370 km hike south. They also have several banners, though they are hard to see. 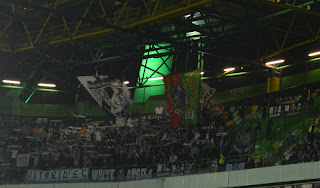 The game starts pretty well for the home side, which creates a couple of soft changes, but becomes a bit sloppy. That leads to a couple of great Vitória counter attacks, which are hard to see, however, because it takes quite a while before the smoke of the fans’ fireworks at the start of the game cleared off. 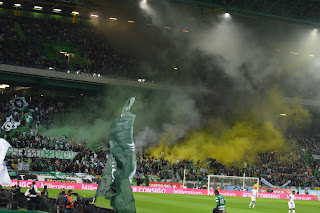 The players are technically good, tactically ok, but the final pass is lacking. This leads to pretty good combinations between the two goal areas but very few good chances. Sporting has most of the ball, and pressure, while Vitória is happy to counter attack. 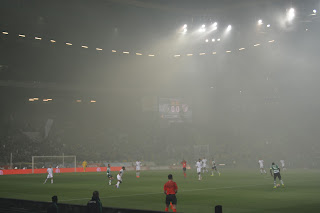 In the 35th minute Sporting has a good cross from the left, the Dutch striker Dost heads it back, and Ruiz finishes from 7 meters: 1-0 for the home team. This remains the score in the first half, which ends with a good Sporting attack, but the low shot in the corner is saved at the last minute. 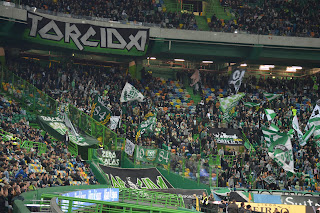 The second half starts poorly, with many small fouls and poor passing, which cause the game to never really take off. Sporting, which was the better side in the first half, seems not very motivated. In the 67th minute the have a good, fast attack over left, the ball is pulled back, but the low shot goes just wide. That will be almost everything they show that half. 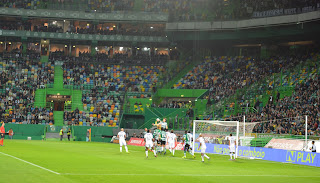 Vitória gets more and more of the game, even if they continue to play counter-attacking football. In the 73rd minute they have their first good attack, but the shot goes just over. In the 76th they have a similar attack, now over right, ball is pulled back, and a cool finish draws the game: 1-1. Fully deserved. 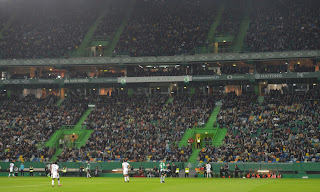 After that Vitória is much closer to a win than Sporting and the home fans get increasingly frustrated. I am secretly hoping for a stunt, but Guimarães is too cautious to give Sporting the final stab and thus the final score is 1-1, which is almost flattering for the hosts. 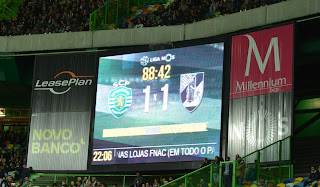 All in all it was a good experience. While ultra-modern stadium like the Estádio José Alvalade are not really my thing, the atmosphere was good, and the fans were real. Moreover, Portuguese football is pretty affordable and quite decent, so you get value for your money. But don’t forget about the little teams!
Posted by Grondhopper at 5:55 PM No comments:

On a grey and relatively cold Sunday afternoon I am picked up by car at my hotel by RT, born and raised in Lisbon, who shares virtually al my passions: academics, politics, and football. He had wanted to take me to a home game of the team of his neighborhood, Clube Oriental de Lisboa (Oriental), but instead drives me across the river to the industrial town of Barreiro, where Oriental will face the local club. 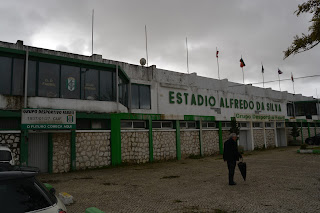 Grupo Deportivo Fabril was founded in 1937 as the football team of Companhia União Fabril (CUF), a Portuguese chemical cooperation and the major business in the town of Barriero. It has a long history in the highest division of Portuguese football, and games against AC Milan in the Inter-Cities Fairs Cup (1965-6), but those days are long gone. Today they play in the Campeonato de Portugal (Third Division). 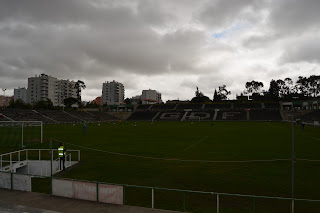 Their home ground, the Complexo Desportivo Alfredo da Silva, also has seen much better days. It can hold 22.000, but I doubt it has seen more than 1.000 on one day for years – barring, perhaps, a Cup game against one of Lisbon’s giants, Benfica and Sporting. We get tickets for 5 euro each – they give us half of an old stub from previous games, which we then have to hand back again at the gate. 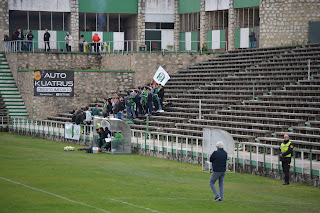 Today there are roughly 100 people. Clearly most people are local and working class, almost exclusively white, but I am quite surprised how many younger people there are, including a small group of “ultras,” who sing for most of the game. That said, the bulk of the people are older, some might have experienced the better days. There are also some 20 away supporters from across the river. 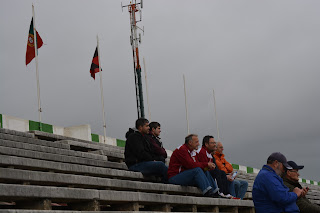 The weather is bad and the pitch is even worse. This leads to slow play, mostly in the middle third of the pitch, dominated by incorrect passes. This notwithstanding, in the 15th minute Oriental gets a corner and it is headed into the goal: 0-1. 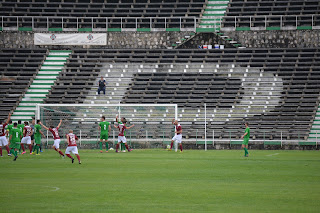 That would also be almost the only notable action of the first half. In the 38th minute Fabril gets its first half-chance, a half-assed volley that goes wide. Half time score: 0-1. 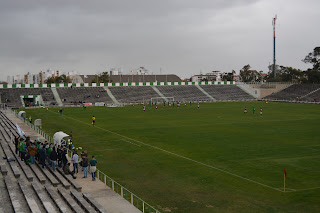 We get some chewy meat sandwiches at the one grill in the stadium and move closer to the one main stand, which provides some cover against the rain. It is a day that wouldn’t stand out in the Netherlands in October, so quite a disappointment for March in Portugal. 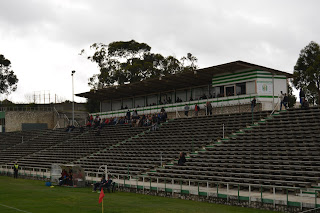 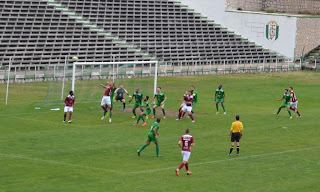 In the 81st minute Oriental gets a corner, which is headed at goal at the first post, and then a second header goes in: 0-2. By that time it is clear to all, players and supporters, that this game is over. There is one more chance, for Oriental, before the referee blows the final whistle. Most home fans take it lightly: they have seen this many times before. 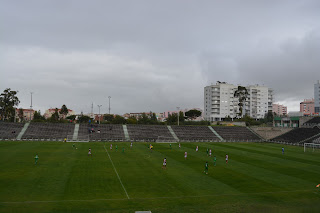 The quality of play was extremely poor, and the weather didn’t help either, but it was still a nice experience. I like old glory, run-down stadiums that still have a hint of the old days, but are largely empty, bar some old-timers who relive the old successes in their heads as they watch the game with one eye. GD Fabril offers this, but also has a small group of next generation fans.
Posted by Grondhopper at 5:39 PM No comments: