How better to spend a miserable February Sunday than with your groundhop friends at a game in the second round of the Coupe de Luxembourg. Hence, grabbing a quick breakfast at Antwerp Central Station, I made my familiar way to , where J.B. and A.H. were waiting anxiously for me to get on our way to . However, before we took off, J.B. and I first honored our Samurai groundhop-friend A.H. with a PSV-shirt, as he will return to the land of the rising sun at the end of next month (but not before we will have one last groundhop on March 10 :-).

But I also got a nice surprise from J.B., who made me official grondhopper business cards. We had been talking about making them before, as we regularly get into conversations with people during our groundhops, and than try to explain what we are doing. This way I can hand the business card out and they can read my report later. This is what J.B. came up with, the wizard! 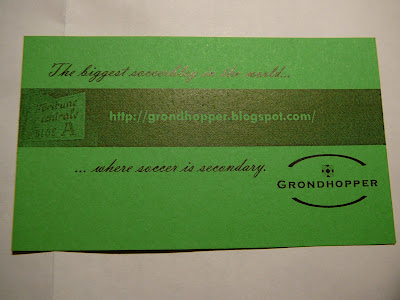 The drive from to Luxemburg is normally one of the more beautiful in , but now it was grey and raining. Fortunately, the closer we came to Luxemburg, the more often the sun would come through. After some 2.5 hours we reached and about twenty minutes, and some slight confusion, later we arrived at the stadium. As we had more than an hour still to go, and saw neither people nor eating facilities, we went into town to have a snack at the local Quick franchise, where we met an American (surprise 1) who turned out to be a PSV-fan (surprise 2). We are spreading the gospel without knowing! 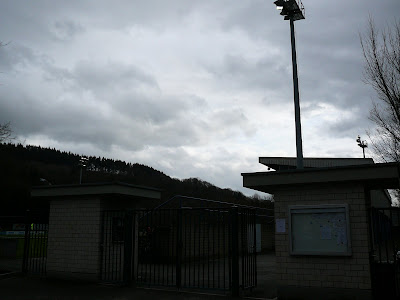 Around 15.00 we made our way back to the Stade Rue Henri Dunant, where we bought a (generic) ticket for the price of 4 euro! The stadium is small, but has one covered stand, which would come very much in hand during the game. Some 250 people would find their way into the stadium that afternoon, of which I guess a third were away supporters (Mamer is less than 15 km from Beggen). Although neither team will be very familiar to the untrained mind, Avenir Beggen used to be a serious team in the Luxemburg Nationaldivision (Premier League). FC Mamer 32, on the other hand, is unknown to even the most seasoned football fan. They promoted to the first division in 2005 and to the premier league a year later, through play-offs. As Avenir Beggen has recently fallen on harder times, relegating to the first division, they were the underdog in this cup game. 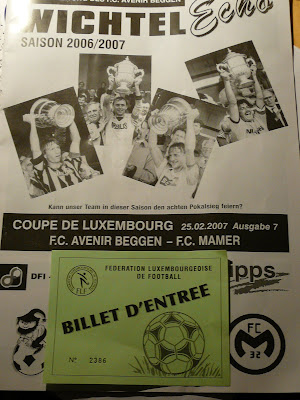 The game started without much excitement, with Beggen being the more dominant team, but Mamer looking more dangerous. The level of the game was probably comparable to a decent Dutch amateur league, but as the teams were fairly equal (Mamer more skills, Beggen more heart), the game became quite entertaining. The first half was for Mamer, as Beggen didn’t flight enough to compensate for their lesser skills, which scored the 0-1 in the 42nd minute. This was also the half time score, so we went to the beautiful new cantina, which was full with banners and posters of teams and games Avenir Beggen played years ago. One caught our eye especially. 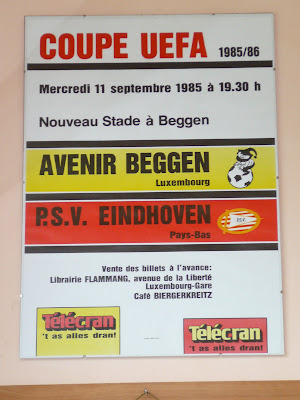 Given the contrast between the temperature (and dryness) in the cantina and outside, and the fact that they had a bowl of free brownies at the buvette (which were really tasty!), we returned to the game just in time to see Avenir Beggen kick-off for the second time in the second half: 0-2. At that time it looked the game was over, as Mamer clearly dominated the game and Beggen seemed toothless in attack. Moreover, it was raining like crazy during most of the second half, which made playing attacking football even more difficult. 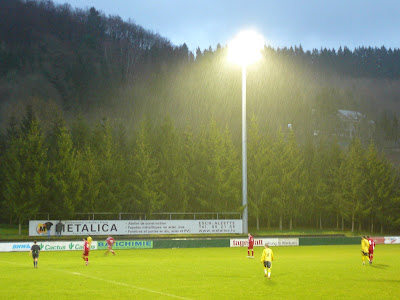 However, football is football, even in Luxemburg, and so the game took a bizarre turn with Avenir Beggen scoring an unexpected 2-1 halfway the second half. The rest of the period was filled with attacks of Beggen and (tame) counters of Mamer. This paid off in the 90th minute, when the home team scored the 2-2: extra time! 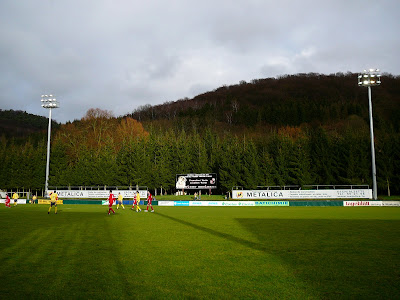 The extra time brought a couple odd chances for both teams, though the best were for Mamer, but none was able to score again. And so, for 4 euro we not only got 120 minutes of quite exciting cup football, but also the ultimate in suspense: a penalty shoot-out. Frozen by the cold and rain all players squeezed themselves into their respective dug-outs to wait for their trainers to decide who were the five (un)lucky ones to take the penalties. In the continuing storm of rain, it would become the day of Philippe Chrismousse, the goalie of Avenir Beggen, who saved the first two penalties of FC Mamer 32 with beautiful dives. 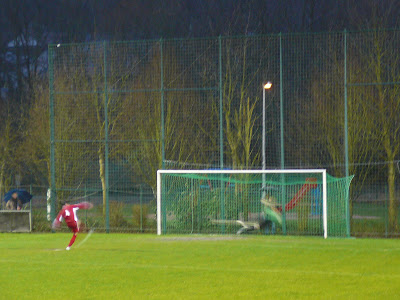 As all other players scored, Avenir Beggen won the game in their fourth penalty, advancing to the third round of the Coupe de Luxembourg. Despite the level of play, this was a true cup fighter game, a genuine treat for any groundhopper. Hence, we returned cold but extremely satisfied. We will be back in Luxemburg soon!

Posted by Grondhopper at 3:22 PM No comments: