Having driven the three hours from Jackson, MS to New Orleans, LA the night before, I had the whole day to take in the sites of the most unique city of the US, New Orleans, a city of many extremes. At 18.30 I drove to the City Park, not far from the center, where the Jesters play their home games in the recently renovated Pan-American Stadium. I arrived about 20 minutes early and it was already bumping. I paid $10 for an adult ticket, which gave me access to both main stands. 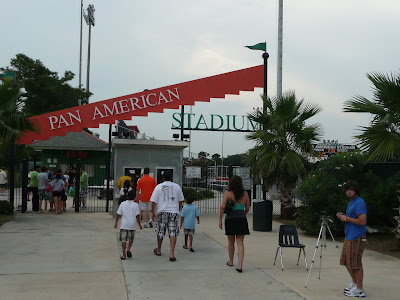 The turnout was quite impressive on this “Kick in for the Gulf” night: some 800-1.000. The make-up of the crowd was quite typical for US soccer: ca. 75% white, rest mostly Hispanic, almost half kids, and 10 or less away fans. Unfortunately for the club, there was way more interest in the petting zoo (including a little Bambi!) than in the fan shop. 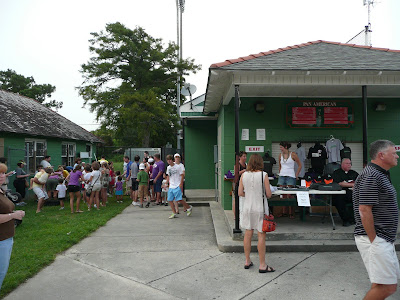 The weather was quite perfect for a summer evening game: not too hot (ca 80F/27C) and with a nice breeze. The Jesters were in the middle of their PDL Division and played quite nice passing football on their Astroturf pitch, while the Blackhawks are a new team at the bottom of the division, who clearly have not played much together yet. Within 10 minutes the hosts were already 1-0 up, through a deflected pass. 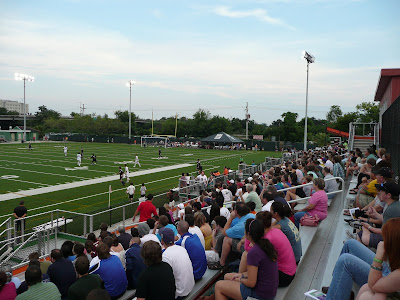 Barely five minutes later, a Jesters free kick is boxed away by the goalie, but the rebound is shot hard and low in the corner: 2-0. This seems to be game over, but in the 25th minute a Blackhawks free kick just outside the box goes surprisingly in the far corner: 2-1. 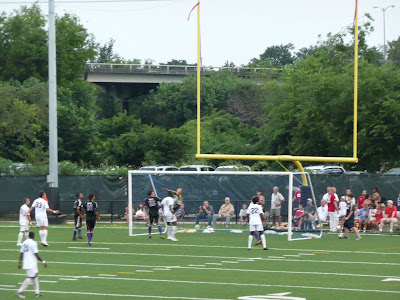 While most play takes place in the middle half of the pitch, both teams do create chances, mostly because of bad tactics in defense. In the 32nd minute a nice through ball of the Jesters is finished through the legs of the goalie: 3-1. Two minutes later their goalie saves a hard shot from 10 meter. However, a couple of minutes later he cannot stop the attack: 3-2, which is also the half time score.

At half time I switch sides and move to the other stand, which by now has become quite busy too – mostly with students and Hispanic families. The second half starts with an offside goal of the Blackhawks and two great saves by their goalie. The game starts to loose tempo, undoubtedly a reflection of both the heat and the fact that the much better team is leading. The Jesters keep too many players behind the ball, which means that they have a lot of possession, but create few clear chances. In the 74th minute the game is decided by a red card for a Blackhawks player; I missed what exactly happened, but did notice that the Jesters player made the most of it (maybe he watched Arjen Robben at the World Cup…). 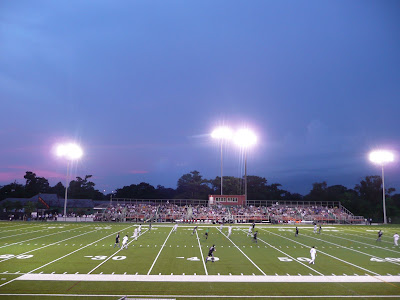 Fortunately for the Blackhawks, the Jesters continued in their negative, defensive play, and didn’t go in for the kill. However, with a man more and clearly better players, they did score. First, in the 82nd minute, though a perfect header after a corner, and second, and final, in the 90th minute after a bad clearing by the goalie: 5-2. 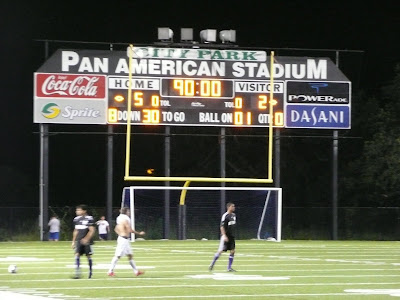 New Orleans used to have a top team before Hurricane Katrina devastated the city. With the new Jesters they seem to be on their way back, even if they are competing with two other strong teams in their division: Mississippi Brilla and Baton Rouge Capitols. However, the infrastructure and fans are there, and I am certain soccer is there to stay in The Big Easy!
Posted by Grondhopper at 7:17 PM