After the experience of CLE-MPS/Atletic Malmi, I arrive with pretty low expectations to this game, which is in the same Kolkomen division. Both PPJ and Toukolan Teräs FC (TeTo) are from Helsinki and look like recent youth teams with most players in their late teens or early twenties. 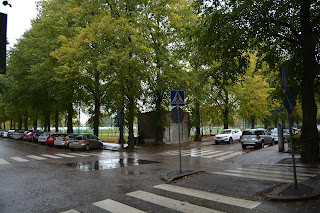 The game is played at Väinämöisen kenttä, an astroturf pitch that is part of a communal park with the barest of facilities – two changing rooms and a restroom. There are only some 10 people who are not directly affiliated with the team, i.e. coaches and reserves, seemingly all family and friends. The weather is dire: cold, grey, and rainy. 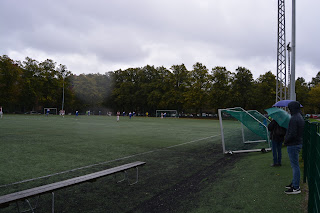 The quality of play is definitely higher than yesterday, as is the pace of the game and the technique of the players. In the 3rd minute TeTo attacks and shoots at the post. Five minutes later PPJ has a good attack that leads to a save by the goalie, while in the direct counterattack a TeTo striker gets alone in front of the other goalie and finishes cool between his legs: 0-1. 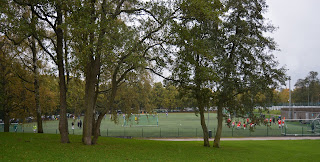 The build up is slow but the passing is (too) fast. Both teams also hold many players behind the ball. In the 15th minute a decent shot by the visitors goes wide. Seven minutes later a good attack by TeTo leads to an attacker making himself free and then finishing low in the corner: 0-2. Not much later they attack again but shoot just over the goalie and goal. After half an hour the hosts have a good attack and shoot, from 18 meters, over the goalie: 1-2. 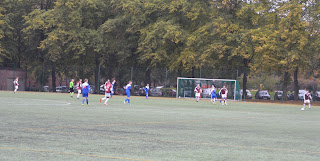 The game now becomes insanely slow and the build-up even more cautious with both defenses playing very deep. Just before half-time PPJ has a good attack, the goalie responds poor on the first shot but good on the rebound. Half-Time: 1-2.

In the 52nd minute TeTo has a good attack but poor control by the striker blows it. One minute later PPJ has a long ball, the left striker pulls back, has all the time in the world, and shoots low in the corner: 2-2. Good comeback, but only short term, as fifteen minutes later the guests again score, with a volley that rebounds from the post and the goalie and is finished from 2 meters: 2-3. 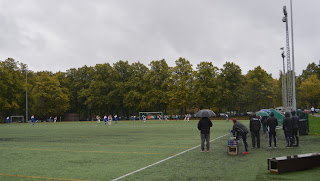 At this point a dude comes up on his bike and starts to talk to one of the PPJ attackers. They have whole conversations as the play continues, with the player seemingly going out of his way not to stroll too far away from his friend. Incredible! Despite some attacks, the final score remains 2-3. 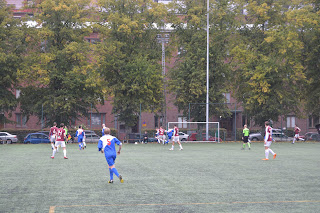 I don’t think this has happened often, but the Kolkomen is definitely too low a level for me to enjoy. The play is poor but, more importantly, there simply is no atmosphere or culture. The clubs don’t even play at their own ground! Turns out, there is a bottom in groundhopping and I have just hit it!

Posted by Grondhopper at 5:59 PM No comments: 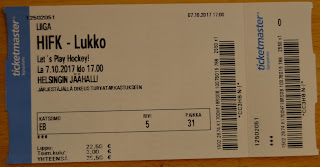 After seeing two soccer games at rather low level, I thought I would reward myself by going to see a hockey game in the highest division in Finland, the Liiga, traditionally one of the hockey supper powers in Europe. 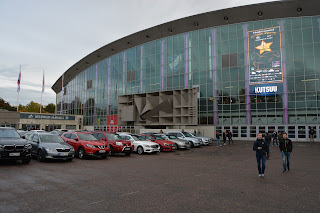 Idrottsföreningen Kamraterna, Helsingfors (Sporting Society Comrades, Helsinki) plays in the Helsingin jäähalli (Helsinki Ice Hall), a modernized hockey stadium, originally built in 1966, which holds 8,200 people. I buy a ticket for €25.50, which puts me high in the corner, but still with a great view of the rink. 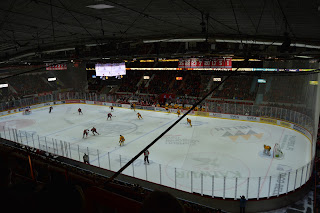 The stadium is almost two-thirds full, with an official attendance of 6,613, and has a cozy and lively atmosphere. The audience is white, but very mixed in age and class, with some 25 percent women. I don’t see many away supporters, but Lukko (Lock) is from the town of Rauma, in the Swedish speaking part of southwestern Finland, roughly 250 km (ca.  160 miles) from Helsinki. 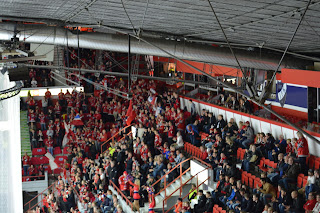 While HIFK dominates the opening minutes, and even hits the post, but Lukko scores the first goal: 0-1 in the 6th minute. In the 16th minute HIFK gets a great chance in Power Play, but misses.. Two minutes later they do finish a rebound with a low, hard shot: 1-1. Despite two more good shot of the home team, two good saves by the Lukko goalie make 1-1 the score after the first period. 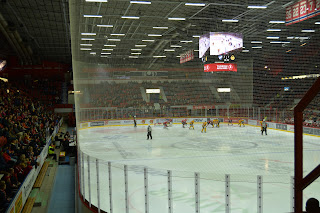 In the 3rd minute of the 2nd period a covered shot from 5 meters goes high in the goal: 2-1 for HIFK. The play becomes even messier, with many smaller and bigger mistakes on both sides, and very poor Power Play. They do like to hit the boarding hard, but overall the game is not rough. A few big misses ensure that 2-1 is the score after the second period. 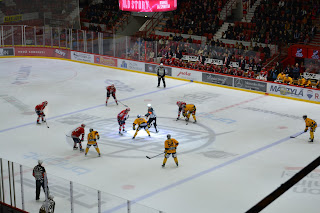 At the beginning of the third period HIFK gets to play 6 against 4, as two Lukko players have penalties, and still the Power Play is bad. They miss three chances from about 2 meters. Seconds after Lukko is complete again, the hosts score with a “lost” shot in the corner: 3-1. The Power Play of Lukko isn’t good either. Overall, both teams miss a couple of chances, which means 3-1 is also the final score. 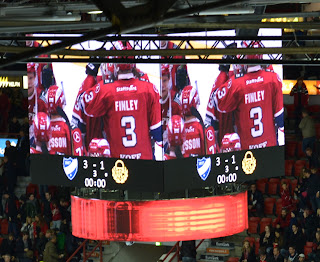 To be honest, I had expected better hockey in the Finnish top league, but maybe this was just a sloppy game. In any case, the atmosphere was really good and Helsinki Ice Hall is a cozy and real hockey arena any hockey fan should visit.
Posted by Grondhopper at 5:53 PM No comments:

Directly after CLE-MPS/Atletic Malmi has ended, I walk through the players entrance onto the pitch and into the stands of the Telia 5G Arena (better known as Sonera Stadium), where a play-off game in the Naisten Liga, the highest division of women’s football in Finland. 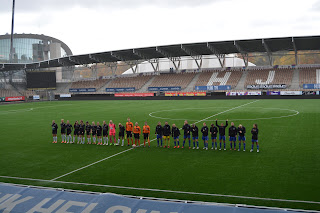 The game is between the local team, Helsingin Jalkapalloklub (HJK), and Turun Palloseura (TPS) from Turku; both are clubs with teams in the top division of men’s football too. There are some 200 people in the stadium, a quite new stadium (inaugurated in 2000) that can hold 10,700. 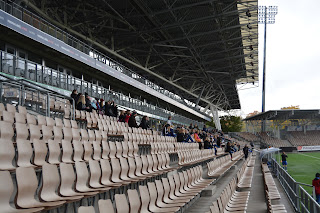 There are some 40 away supporters, who made the roughly 170 km (or 110 miles) trip from Turku (in the southwest) to Helsinki. Although there are some banners, most people seem related to the players. One man is singing all by himself, throughout the game, seemingly unbothered by the fact that no one joins in. 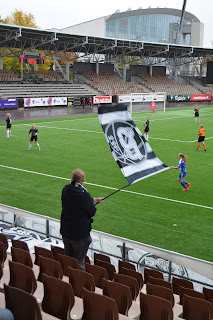 The women on both teams look very young, more like an U-19 than a regular senior team. They are playing on a cold day and the rain starts as soon as the game starts. The pitch is Astroturf, which means it is flat, which means the ball is easy to control, but also very fast in the rain. 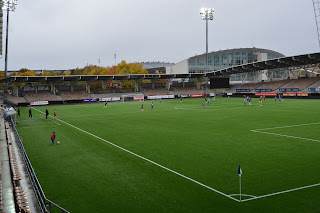 The first fifteen minutes are for the home team, which gets the best chance in the 15th minute, but it is headed just wide. The play is better than in the previous game; the passing, in particular, is good, and the control looks good, but there are also big spaces around players. Some players have powerful legs, others not so much, which sometimes slows down the play. 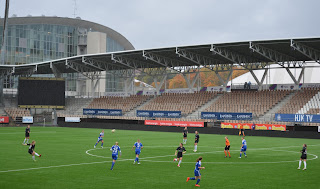 In the 23rd minute a TPS midfielder just goes and goes and then shoots from some 20 meters in the corner: 0-1. Five minutes later they have a surprise shot in the corner, but it is stopped. One of the nicest thing of the game is that the women don’t go down easy and don’t stop playing after every small foul. After just 44 minutes and 23 seconds the referee whistles for half time: 0-1! 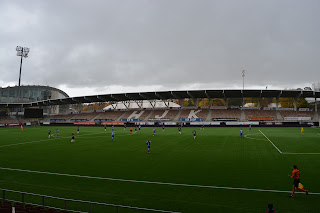 The second half start with a good attack by the visitors but the shot at goal is too weak. Two minutes later the hosts have a corner, which goes over the goalkeeper but isn’t finished. While HJK keeps up the pressure, TPS counters and gets the slightly better chances. Both sides are poor in finishing. 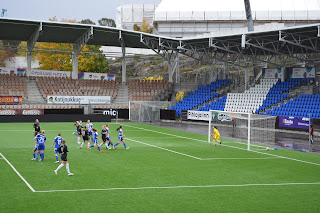 In the 75th minute a long pinball-like attack by HJK ends up, miraculously, in the hands of the TPS goalie. As more and more mistakes are being made, most people seem to believe it will end 0-1. But then, in the 87th minute, the hosts have a corner, the goalie blunders, and the ball falls in the pack of players: 1-1. 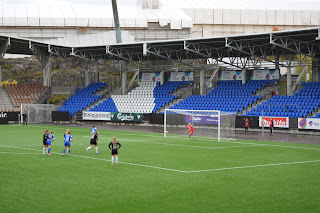 Three minutes later HJK takes a penalty and a striker walks out of the penalty box with the rebound and gets (slightly) fouled: penalty. In the 92nd minute the penalty is converted: 2-1. One minute later the game is over. What a comeback. 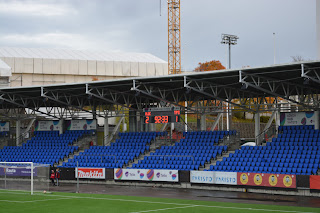 I have to be honest, if there was a game in the first three divisions of men’s football, I would go there. But if the choice is between the Kolmonen and the Naisten Liga, go to the latter!
Posted by Grondhopper at 4:20 PM No comments:

For work in Helsinki, Finland, I am excited to see some games over the weekend. I was once before in Helsinki, and only saw one game, of PK-35, but this time there are some problems too: it is World Cup Qualifier weekend, so the top leagues don’t play. The best I can find is the Kolmonen, which means Third Division, but is actually the fourth tier of Finnish football, which is organized regionally.