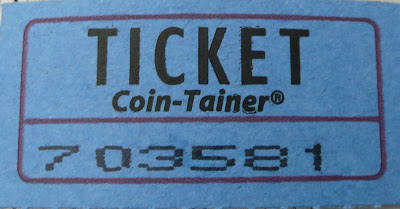 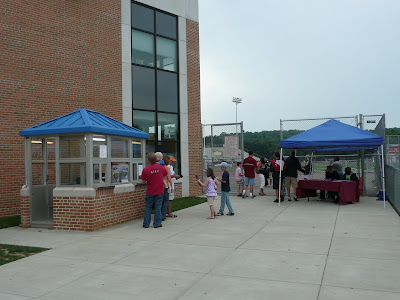 The Riverhounds play in the stadium of the (huge) Chartiers Valley High School in the Bridgeville suburb of Pittsburgh. Normally home to the school’s American Football team, the Colts, the stadium holds 4,600 people. I buy a general admission ticket for $9 – as it is Ladies Night, women enter for $4. Officially, 853 people turn up this evening; I estimate some 25 away supporters, divided into four families. Whether they have made the 450 mile (720 km) trip for this game, or are local, I don’t know. 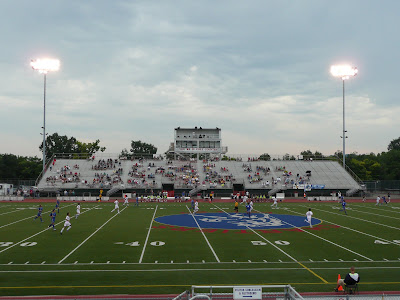 The game starts thunderous: after 24 seconds a Riverhounds player comes alone at the Eagles goalie and, although shooting poorly, scores: 1-0! Probably the quickest goal I have ever seen. After that quick goal the game moves quickly back and forth. In the 6th minute the visitors attack over right and finish well: 1-1. Not much later, it would become even worse for the hosts. In the 13th minute the Eagles have a sneaky free kick which is met with a strong header: 1-2! Three goals in under fifteen minutes, amazing! Obviously, the fans around me are stunned and pissed off. 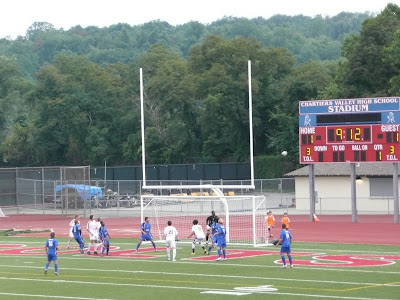 The level of play is quite decent, in part because of the astro turf, which makes controlling the ball and setting up combinations much easier. I particularly enjoy the number 21 of the Charlotte Eagles, Toby, a short black player with fantastic technique. But there is much else to see, as the chances keep coming up on both sides. The Eagles are the better team, and have in their experienced number 12 a great passer, who does need some defensive compensation though. 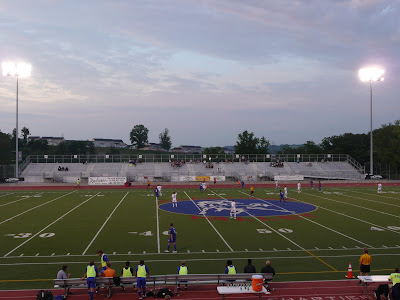 Even in the last two minutes of the first half both teams have a decent chance, which they squander with bad finishing. Overall, we have seen a great first half, but most of the spectators are understandably disappointed.

The second half starts explosive too: in the 46th minute the Pittsburgh goalie weakly boxes the ball out of the goal, but the rebound is headed out and a consequent counter-attack is just shot wide. Five minutes later, the annoying number 4 of the hosts is sent off after a push in the face and, in the following consternation, another Pittsburgh player is red carded (I guess for protesting in an uncivil manner). The Steel Army goes crazy! 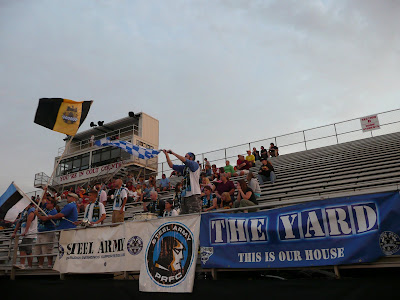 Despite being two men down, it’s the Pittsburgh Riverhounds who get the next big chance. In fact, they stay well in the game, as the Charlotte Eagles by and large go on autopilot. But despite all the possession, and the low pace of the visitors, it is the Eagles who easily score their third goal of the match: 1-3. 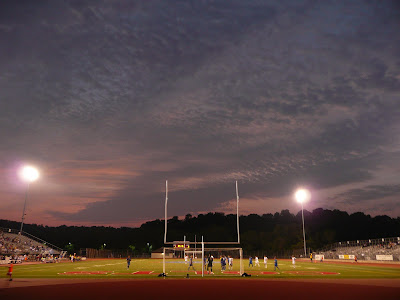 Although it is clear that the game is played, the 9 Riverhounds put up a commendable fight, and the 11 Eagles totally miss an opportunity to work on their goal difference. Many chances and half-chances follow, but the score remains (somewhat disappointingly) 1-3. 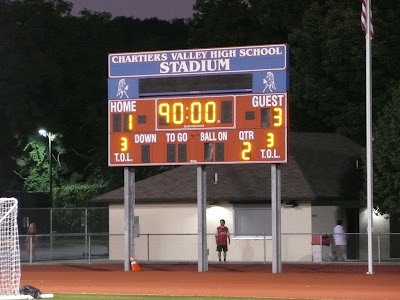 Clearly, the Riverhounds are not Pittsburgh’s biggest team. In fact, their attendance isn’t particularly impressive for the USL2. But if you find yourself in the region, and can’t get tickets for the Steelers or Penguins (which you won’t), do pay them a visit!
Posted by Grondhopper at 7:42 PM 2 comments: