As I had to drive back from New York to Indianapolis after Christmas, and Pittsburgh is roughly halfway, I decided to watch a game of the Steelers on the way back. Obviously, the game was sold out weeks in advance – people can be on the season tickets waiting list for years without ever getting one – I got quite a good deal on Stubhub -- $150 (including tax and service charges) for a fantastic seat – undoubtedly helped by the fact that I needed only one single ticket. 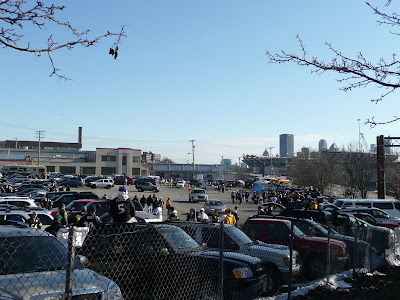 I had stayed the night in a hotel around Pittsburgh airport and left Sunday morning around 11 as I had read a lot about terrible traffic and the impossibility of finding (affordable) parking spots. However, traffic wasn’t too bad and around 12 o’clock I parked for free at a side street at a less than 15 minute walk from Heinz Field (and virtually next to a $40 tailgate parking lot). 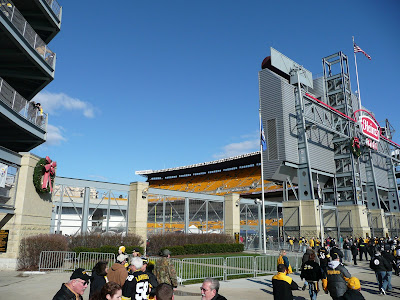 The weather was perfect: sunny but cold. I walked in a sea of black-and-yellow Steelers fans to the stadium, which I entered half an hour before kick-off. Heinz Field is a big open football stadium with a capacity of 65,050; home to both the Steelers and the Panthers (University of Pittsburgh). Inside the stadium is a large plaza full of high-quality eateries (including a Primanti Bros with consistent long lines) and with the record six Super Bowls on display. In addition, there was a live band playing metal covers. 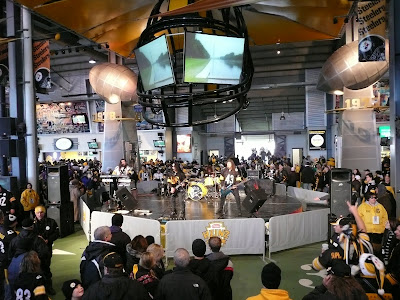 Although the Steelers, last year’s Super Bowl winners, were having a bad season, a last-second touchdown in last week’s game put them back into wild card contention. The Baltimore Ravens were on course for a wild card, but lost the week before. In other words, this traditional rivalry was even more important than normal, and you could feel the tension among the home fans. The stadium was sold-out, as always, and I guestimate some 500 Ravens fans had been able to get a ticket. 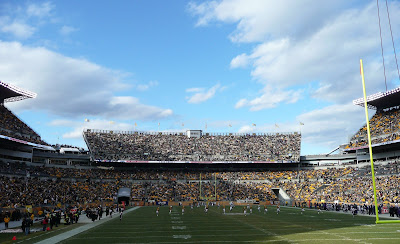 Just after 13.00 the game was started, after a fairly original national anthem by local band B. E. Taylor, and the home fans directly showed that I was in a real city. Most comments were negative and full of profanity. The guy behind me, a police detective in Washington DC, shouted at the Ravens quarterback “He, Joe Flacco, You Sucko”, which became an instant classic. Not much more need to be said about the quality of comments from the people around me. So, let me turn to something more positive, my seat, at the 45” line! This is a picture take without a zoom! 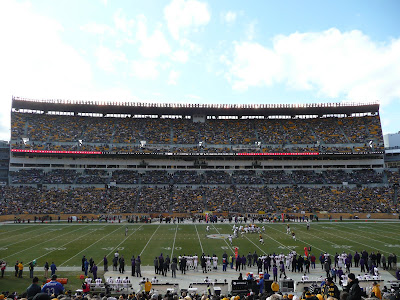 The first period was quite poor: no touchdown, just field goals, and a score of 6-3 for the Steelers. I was amazed by how critical the fans were to their own team. Clearly, they had expected much more of the season so far. The one thing that Steelers fans are known for is the “terrible towel”, a yellow towel with which they wave when singing, very similar to the scarves that German football fans use.

The second period brought more entertainment. Both teams score touchdowns, keeping the game close. Then the Ravens get an interception, but the first play after that the Steelers have an interception; typical for the game. But just before half time the Steelers score a second touchdown and finally create some space between the two teams: 20-10. 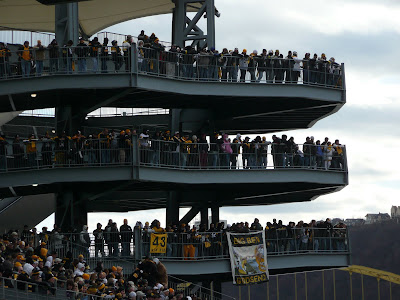 After some half time entertainment by Cello Fury, three cellists and a drummer, the game starts again, but I miss most of the third period being in line at the Primanti Bros. The Ravens score a touchdown early on, which brings the score to 20-17. On the monitors I see an interception by the Ravens which is followed by a 50 yard touchdown… only to be recalled because of a defensive foul. A field goal a bit later does bring the two teams together at 20-20. 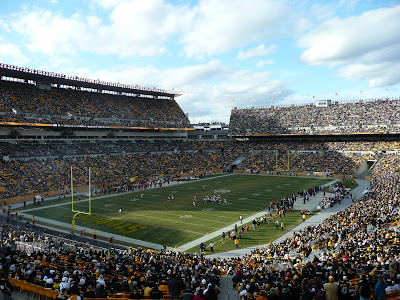 The fourth period remains really tight. With some five minutes left on the clock, and me starting to worry about overtime (as I still had a 6 hour drive in the snow ahead), the Steelers kick a field goal and get three points ahead: 23-20. As I start to leave the stadium, making sure that I won’t get stuck in the postgame traffic, I see another Ravens interception with a 50+ yard touchdown on a monitor. And would you believe it, it is again overturned because of a dumb holding foul. So, in the end the Steelers win 23-20 and keep their hopes for a wildcard open. 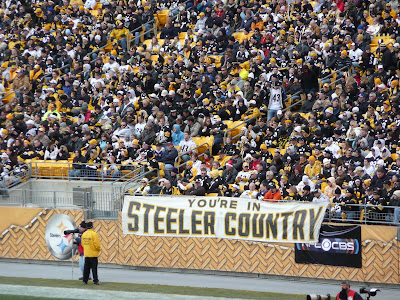 There is no doubt that people in Pittsburgh, and miles and miles beyond it, love the Steelers. No, they live for the Steelers. As the big team in the league, many people hate them, and their own fans are very demanding. Hence, a Steelers game gives you a great insight into the NHL: big, boisterous, and brutal.
Posted by Grondhopper at 8:12 PM No comments: