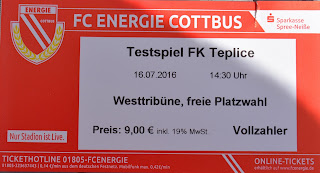 Hertha Zehlendorf 03 is a small team from a leafy suburb of Berlin, which at times plays in the first or second round of the German Cup (DFB Pokal). Its stadium is tucked away behind the club offices, where it is part of a football complex with several pitches. 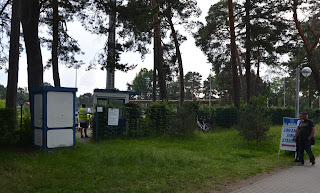 Today is the last home game of the regular season in the NOFV-Oberliga Nord. I pay €8 and enter the Ernst-Reuter-Sportfeld, where I find a pretty decent stadium for a team that has never played in the highest divisions. It has one covered and seated stand and one uncovered (standing) stand, both along the long sides of the pitch. 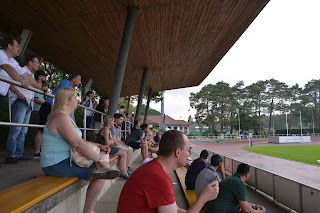 There are 105 people, of which 72 are paying customers (according to an official announcement). This includes some 30 away supporters, who have made the roughly one hour trip to the east. 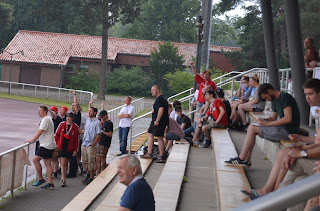 Just as I arrive it starts to rain hard and it doesn’t stop during the game. It is relentless and complicates the play after a while. The players seem all local and overall young, combination of mostly “native” Germans and Germans of Turkish decent. Given that BSC is better but too egocentric, and the pitch is challenging for the players, the quality of play is not too high. 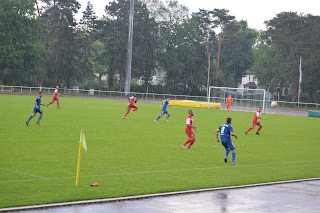 In the 5th minute the visitors get a good chance. In the 19th minute the Hertha goalie gets injured and has to be changed. Two minutes later BSC has a good attack and the low shot is difficult for the new goalie.

Only after one half hour do the hosts get their first good chance but the finish is weak. But at least the game gets livelier. In the next minutes both teams get more or less good chances. In the 38th minute Hertha has a good counter, including a smart through ball, which is controlled with the right foot and finished with the left: 1-0 Hertha! 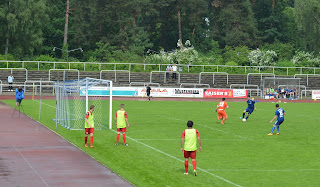 The goal strengthens the home team, which creates several more chance before half time. As BSC puts more pressure on the hosts, Hertha counters, but finishes poorly. In the 46th minute a low shot from 20 meters is saved in the low corner by the goalkeeper. The corner is headed over. Half time score: 1-0. 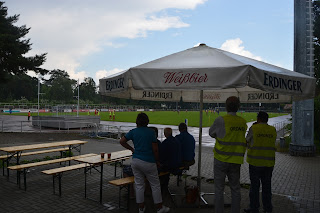 The second half starts where it ended. In the second minute a slow attack by Hertha ends with a low shot in the corner that beats the goalie: 2-0. It takes everyone by surprise. This lowers the pace of the game even more, as both teams seem to have accepted the Hertha win. In the 60th minute a blunder by a BSC defender leads to a short from 5 meter at the crossbar. Six minutes later the visitors finally have a half decent chance but the low shot is stopped by the goalie. 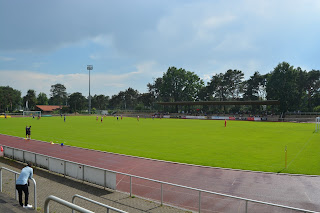 In the 78th minute Hertha has a great counter, which pout two players in front of the poor BSC goalie, who pass and score: 3-0. A couple minutes later BSC pulls off one last attack. A free kick at the edge of the penalty box lands on the crossbar. The final action is for the hosts, however. A great through pass puts the striker alone in front of the goalie, he gets around him, and finishes coolly. 4-0 is also the final score. 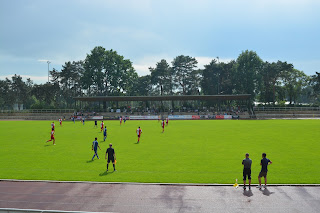 Hertha Zehlendorf 03 is a good example of the superior accommodations of German football, even at lower divisions. Its ground would be among the better ones in second divisions of many European countries. They don’t attract many fans though, and mainly from the district. Still, a nice groundhop.
Posted by Grondhopper at 5:21 PM No comments: