The terms "groundhopping" and "groundhopper" can not (yet) be found in any dictionary, yet there are hundreds of groundhoppers around the world, most notably in Germany. The word combines the terms "ground" and "hopping" and refers to the visiting of different sports grounds -- usually, though not exclusively, football grounds (for a German description, see Wikipedia).

Whereas normal football fans tend to visit only home games of their favorite team, particularly when they live closeby, and more fanatical fans also attend the away games of their team, the groundhopper aims to visit as many different grounds and teams as possible. Moreover, unlike the normal fan, who generally prefers to visit the big teams in football (e.g. Bayern München, Manchester United, Real Madrid), the groundhopper goes for the exotic (e.g. Avenir Beggen, Ozeta Dukla Trencin, Selangor PKNS) and the tiny, such as the third team of a city (e.g. Partick Thistle, Royale Union Sint-Gilloise, Spvgg Unterhaching).

While groundhopping is largely a non-organized activity, by individuals and small groups, there exist a few organizations of groundhoppers. The most famous is the German Vereinigung der Groundhopper Deutschlands (V.d.G.D.): it's website is one of the major sources of information on clubs, leagues, and stadiums in the world. For other groundhopper websites, see the links on the right.

This website provides an overview of the various groundhops of me, Grondhopper. I'm a Dutch academic and football fan, supporting PSV in the Netherlands, Borussia Mönchengladbach in Germany, and the Portland Timbers in the USA. I regularly travel abroad for both work and pleasure, and try to combine these trips with groundhops. In addition, I make several special groundhops every year alone or with one or more of my friends, some of which are active groundhoppers themselves. I have currently visited 462 clubs in 45 countries on 6 continents.

If you like the reports, become a follower of this blog. Comments are also always highly appreciated. You can post them either here on the site or you can email me at grondhopper[at]gmail.com.
Posted by Grondhopper at 2:21 PM No comments:

This is the season opener for the NPSL Southeastern Conference, which has only a 10 games season. Until a day before the game, there was no sign of the game outside of the general NPSL website — neither club has a particularly useful website. 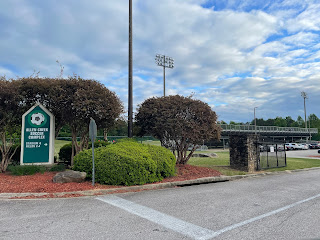 The game is played at the Allen Creek Soccer Center, a large soccer complex with 10 or more pitches in the woods somewhat outside of Gainesville, GA. The home team, LSA Athlético Lanier (yes, they really write Atletico like that), also seem to go by LSA Sharks; at least, that is their url. They have been in the semi-professional National Premier Soccer League (NPSL), the fifth tier of US soccer, since 2020. 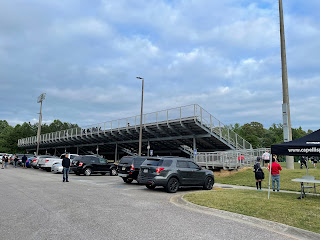 There is one long side with bleachers, no tickets, and seemingly no place to change clothes, as most players of the away team, Georgia Storm SA (not to be confused with Georgia Storm FC!) arrive at the same time as me, ca. 15 minutes before kick-off. They are all Hispanic, as are all but one of the officials, of which one is a woman, the referee — not uncommon at this level in the US. 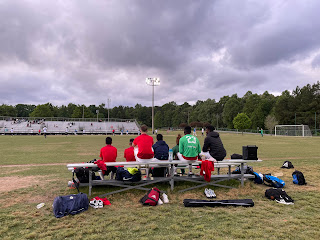 It is a chilly May evening for Georgia. It is windy, clouded, and at best 15 degrees Celsius.  As so often, both clubs are soccer academies, which make their money from youth soccer and field a “pro” team for PR, mostly. Unsurprising, then, that there are only some 50 visitors, almost all families and friends of the players. 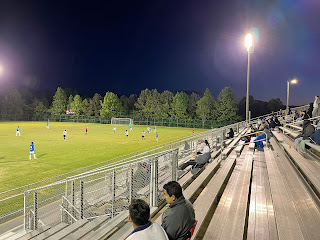 The pitch is real grass but in a poor condition. It is very dry with patches of sand. Refreshingly, the little boombox is so weak that you can barely hear the national anthem before the game. Much of the audience seems also unbothered by it. 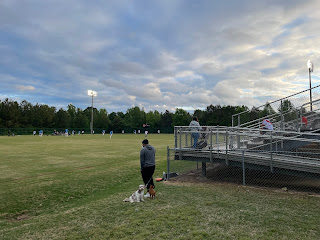 The game is played mostly in between the two penalty boxes, with both teams having a hard time controlling and passing the ball. In the 20th minute, after an obvious dive that is waved away by the referee, the visitors shoot from 25 meter just over the goal. 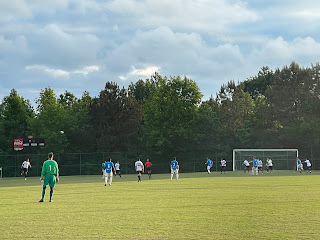 Overall, there is very little happening. The home team complains a lot, about virtually every rough push or tackle, while the visitors have most of the game. I am getting cold and hungry, so I decide to go and get some food just before halftime. 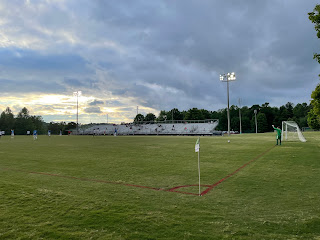 As the stadium is so remote, I have to drive almost 15 minutes to get something to eat – moreover, two places are closed, so I end up at Sonic (don’t ask!). As I return 15 minutes into the second half. I’m told that LSA Athlético Lanier leads 1-0, which surprises me, as they are clearly the weaker team. 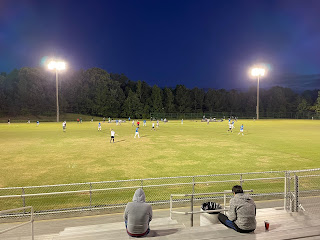 In the last 30 minutes as little happens as in the roughly 40 minutes of the first half I see. The hosts continue to complain about anything to the referee – I seriously doubt they would also have done that to a male referee – while the guests mainly play but cannot really create good chances. In the end, it remains 1-0. 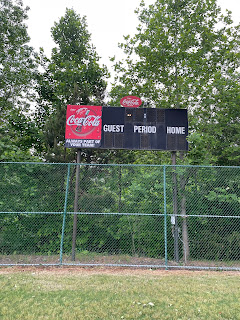 This game was overall pretty similar to the hundreds of pick-up games that are being played across the US, albeit with bleachers and a bit more friends and family. Absolutely nothing points at the existence of actual football clubs, let alone semi-professional football. This is the problem of the NPSL, which has some nice teams and venues, but mostly is soccer academies sporting a team to attract more kids. I don’t think I can do many more of these games.