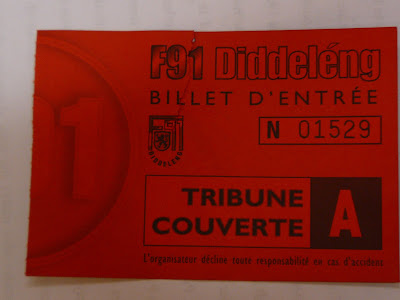 Fair enough, one doesn’t really need an excuse to visit a game in the Fortis Ligue, but having our Samurai-groundhopper A.H. in town, left J.B. and me with no other choice than to hit the Škoda and make our way to . So, after our usual meet at station we headed out to Diddeleng (Dudelange in French), a pleasant journey of some 250 km over the most beautiful motorway of (in terms of scenery that is, as it passes through the ). As we had left early (12.00) we arrived well before kick-off (16.00). Unfortunately, restaurants in Dudelange Cité only open their kitchens between 12 and 2, so we had to settle for a (very acceptable) doner kebab place. I know, what about the stadium snacks? Well, earlier experiences in had made us a little bit careful, as they don’t always serve many snacks. And if they do, it is almost always exclusively geared towards the homo carnivorus (a large category which nevertheless excludes J.B.). 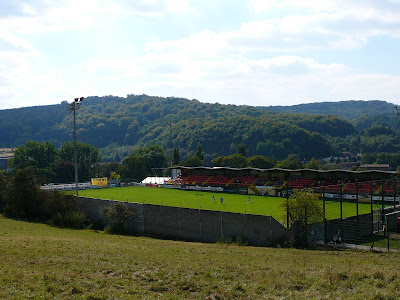 Well before kick-off we parker our car behind a long line of cars on a hill above the Stade Jos Nosbaum. This is actually one of three official stadiums of the F91 Diddeleng, a legacy of the past, as F91 is a merger of no less than three clubs from the rather small town: , Stade and US. While the Stade Jos Nosbaum is home to all official games of the first team of F91, the other two stadiums are used for practice (Stade Aloyse Meyer) and all other teams (Stade Amadéo Barozzi). The capacity of the Stade Jos Nosbaum seems debated, as the English Wiki mentions 4,650, while the more detailed German Wiki claims 3,257, of which 592 at the one covered main stand, 965 seaters at the opposite uncovered side, and an additional 1700 uncovered standing places. 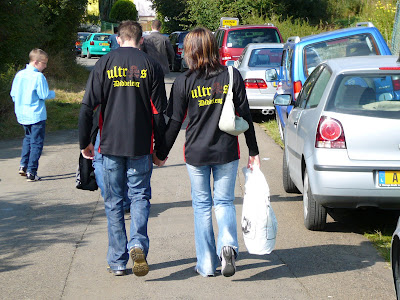 Descending upon the hill where we parked the car, we walked behind two real F91 “Ultras” ;-); it later turned out that they represented over one quarter of the whole “Ultra movement” of F91. In front of the stylish entrance of the stadium was a cosy atmosphere, as people were enjoying a last summery day with their friends and fellow-F91 fans. It turned out that there were two ticket offices: on the left were the tickets for the “members”, on the right for the “non-members” (which were 2 euro more expensive). For 8 euro we bought tickets for the covered main stand, even though it was beautiful sunny weather, so that we would have access to all parts of the stadium. 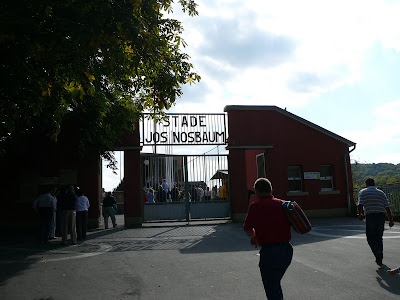 Directly next to the entrance was a small shack that read “Fan Shop” and that offered a remarkable selection of old and recent F91 strips. Fortunately, it also sold pennants, in fact two different ones, so I could finally buy my favored souvenir again. After that, there was only one place to go: the sausage stand. True, the selection was not impressive, but who needs anything else than a real Thüringer Wurst, and that at a steal of only 2 euro. 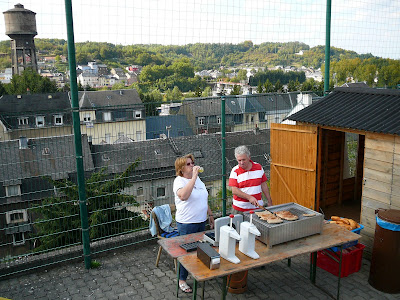 Totally satisfied I sat down at the first row of the main stand, which was so close to the pitch that you even felt that the players were running below you. The first 15 minutes of the game not much happened and I circled the ground to take pictures. I had barely sat down when the game really erupted. After a soft but nevertheless correct penalty, the home team opened the score: 1-0 in the 19th minute. 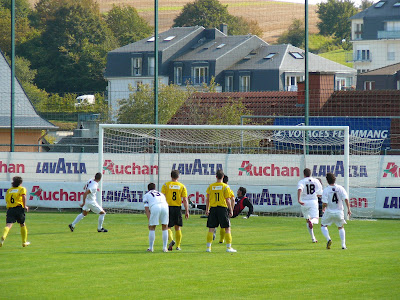 This was the start of a ten minute offensive. Barely one minute later F91 scored a second one, after a nice attack: 2-0. The next minute they were close to a third, with a beautiful action and shot, but this time it was saved by the Niedercorn goalie. Out of nowhere, the visitors broke out and forced a corner, which was headed in by the long-haired number 69 (hmmmm): 2-1. 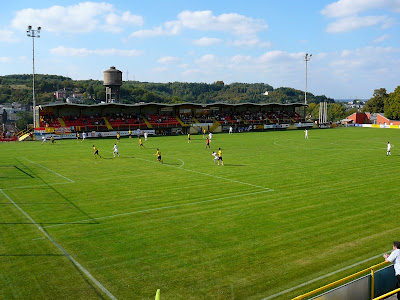 Two minutes later F91 was in front of the Niedercorn goal again, but this time a last attempt sliding prevented a goal. After a great volley in the 27th and a clearing sliding by the Niedercorn goalie in the 29th minute, the home team significantly lowered its pace. Except for one header just over the crossbar, the game was uneventful. Half time score: 2-1. 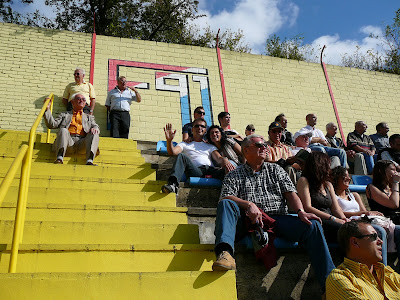 After having circled the pitch during half time, absorbing the images of the ca. 500 happy supporters, I was ready for the second half. It started much like the first half, but after 5 minutes F91 picked up steam again. In the 51st minute the Polish F91 striker started a beautiful dribble passed three defenders and the goalie, hit it back, where a teammate just had to tap it in: 3-1. Just five minutes later the same striker received a great long pass, cunningly played himself free, and scored with a sharp shot in the long corner: 4-1. After that the game was practically over, as F91 had attack after attack and Niecercorn hardly came out of its own half. 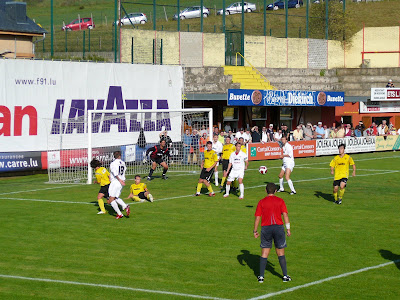 If it wouldn’t have been for the Niedercorn goalie, who kept defending his goal like a lion, the game would have ended 10-1. Instead, with F91 loosing much of its edge, the final score was 4-1, much less than it could have been. This is quite puzzling, as I didn’t think Niedercorn was really that much weaker than F91 in terms of quality, they just seemed to have been totally overrun. 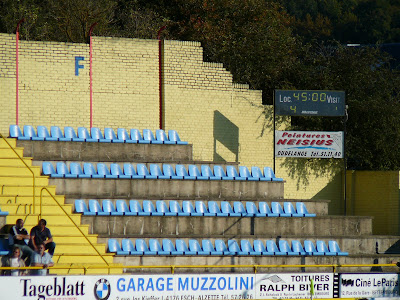 After having eaten one more sausage (they were so delicious), and having stacked up on (cheap) cigarettes and gas, we made our way back to . Having seen a nice game in sunny weather, as well as five goals, our groundhop was made perfect with an unexpected treat on the way back: having left the motorway somewhere in , on an off chance to find an old-fashioned friture (snackbar), we did! I have forgotten where it was, but just off the motorway, without any village in sight, stood this wooden barrack where the old school art of deep fried food was still appreciated. Also by us!

Posted by Grondhopper at 9:56 AM 2 comments: