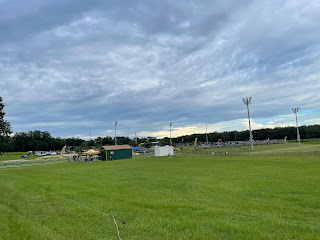 Because of horrible traffic, I arrive 3 minutes late. The “sports complex” is one pitch in the middle of nowhere with small bleachers on one side and on one of part of  one side of the goal. I nevertheless have to pay $10 and get a paper arm brace (with a letter for the bleachers section) but no ticket. 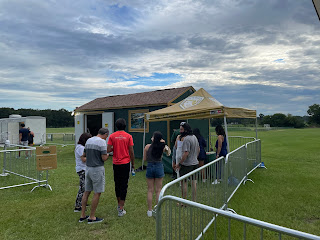 It is the last game of the regular season. The Villages SC has been dominating the Southeast Division of the USL Division Two (Fifth Division), winning 9 and losing and drawing each one. Tampa Bay United is second and, like The Villages SC, already guaranteed a spot in the play-offs. For some reason, and I doubt anyone knows which one, the Villages SC is known as “the buffalos”. 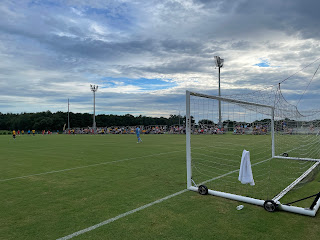 There are some 100 people, a very diverse crowd, with disproportionately many Hispanics and old white people – The Villages became (in)famous a few years ago because of political fights between Trump and Biden supporters. There are quite a lot of people with jerseys, not just kids, and even a small group of tifosi. A handful away supporters also made the 80 miles (140 km) drive East and are also there quite vocal. 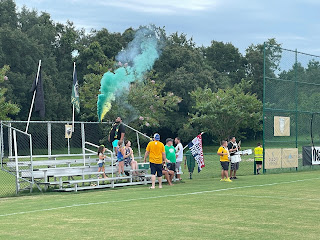 Already in the 8th minute of the game The Villages SC scores out of a quick attack. The hosts are clearly much better than the visitors. The tifosi – a mixed group of some 10-20 fans with several drums – celebrate in style. 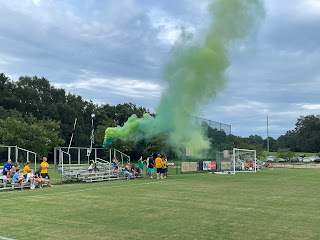 In the 12th minute a Villages header ends on top of the crossbar and four minutes later a good shot by the hosts from 16 meters out goes across the goal and just wide. A minute later a Villages defender makes a mistake that leads to the first attack of Tampa Bay United, but the shot is weak and is easily saved. Three minutes later, in a Villages counter attack, a striker goes alone at the goalie, shoots hard yet well across the goal, but a Tampa Bay defender slides it into his own goal (there was no Villages player around him). The home team remains much better but now gets sloppy. This leads to a good shot from 10 meters out by the visitors but the goalie makes a great save. 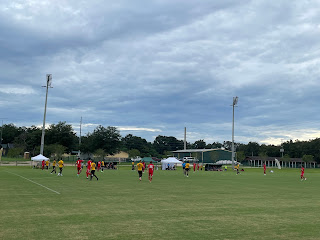 Then there is some drama in the stands: a drunk guy (white, late-40s) threatens to beat someone up and is escorted out by stewards and team officials. In response to his removal, he makes a Nazi salute (but afterwards leaves peacefully and drives home… drunk). As an expert on the subject, I can assure you that this was not the first time he made a Nazi salute (although nothing else – clothes or tattoos) pointed to him being a Nazi). Anyway, the home team remains dominant, the referee keeps ignoring fouls against Tamp Bay, and the Villages strikers keep missing big chances and so it stays 2-0 – even though it should have been at least 4-0. 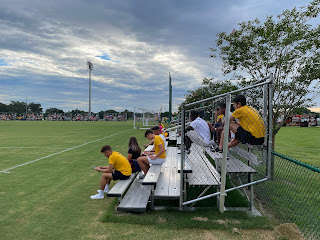 At half time kids play soccer on the pitch, which I haven’t seen in a while at US games. Unfortunately, the pace and quality of the game goes down significantly in the second half. It’s not because it is too hot, although it is very humid. I am mostly focused on, and annoyed by, the announcer, a white guy who tries to imitate Mexican announcers and fails miserably. The Villages SC continues squandering chances, while the game is constantly interrupted with longer breaks because of fouls, substitutions, or water.

In the 72nd minute the referee gives the hists a very soft penalty kick, which is scored low in the corner (just hard enough to beat the goalie): 3-0. I wait a few more minutes and then leave, as this game is clearly over and there is rain ahead. 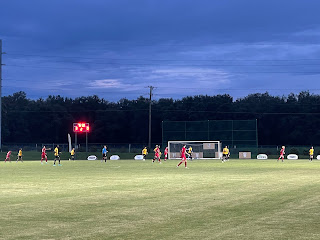 A bit of an odd experience, as this is one of the few USL League Two games not played at a local High School or “soccer park”, and therefore gets a bit more authentic feeling – also because of the tifosi and the many real fans in jerseys – but it also a typical USL League Two game in terms of lack of culture and quality.

Posted by Grondhopper at 6:17 PM No comments:

The Southern Soccer Academy Kings are a soccer academy with men and women “professional” teams. The men’s team plays in the Deep South Division of the Southern Conference of the USL League Two (i.e. Fifth Division). They play their stadium at Marathon Soccer Park, which is just outside of Marietta, Georgia, a rich northern suburb of Atlanta. In fact, it is truly off the beaten track, as it has an own driveway of almost a mile off an already remote street. SSA Kings are aligned with Chelsea FC, as can be seen from the logo. 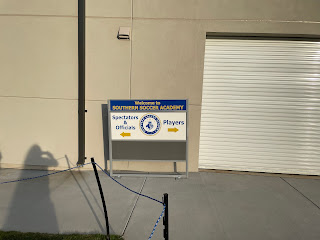 JW and I arrive about fifteen minutes before kick-off. There are quite some cars in the parking lot, many fancy ones at that. We don’t have to pay to get in and make our way to the one side of bleachers. As far as one can speak of a “stadium”, it is one main building with dressing rooms and some other rooms. 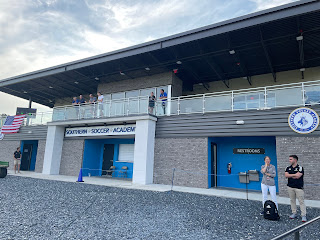 Given that this is a soccer academy, where people (kids) pay to play soccer, the pitch is of an incredibly bad quality. In fact, it is so bent that you can’t see the lines on the other side. The grass is also of poor quality. There are some 100 people, about one third kids who play at the academy and their parents. For Marietta, the crowd is quite Southern but also quite mixed racially. A few fans in their twenties make a lot of noise, both cracking jokes and cheering on the home team, which hives the game an overall cozy atmosphere. 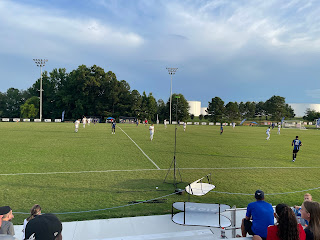 The game starts well. Interestingly, the referee is a rather young woman, who is well in control (I can only imagine the abuse she must face from players and fans in many games). In the 3rd minute the visitors have a good attack that is easily finished in the long corner: 1-0. Although the guests are much better, they make a dumb foul and the hosts get a penalty. Although the goalie got his hands on it, the ball goes in: 1-1.

In the 35th minute Tormenta has an amazing from the penalty spot but the goalie stops it spectacularly. Ten minutes later a long ball comes to the Kings striker, who is inside the box, but his partly blocked shot goes well over the goal. Another cross from the right is volleyed from 5m at the goalie, who saves. Just before half-time, a long free kick of Tormenta is headed just over the goal (but the goalie had it covered). Half Time Score: 1-1. 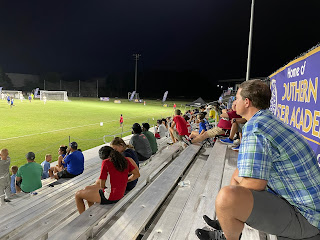 The second half starts with several half chances for the visitors but the big chance is for same Kings striker who missed before and again misses from very close. In the 65th minute the Kings get a massive chance at the lead, but the completely free header from a mere 5 meter away is headed across the goal, well wide. In the 75th minute the Tormenta goalie intercepts the ball but steps outside the box. The consequent free kick is headed hard to the ground from 5 meters and the goalie saves with an amazing jump. 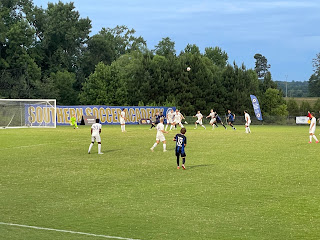 Just a minute later the visitors counter attack and shoot hard at the bar, but the ball bounces out from the goal line. In the 79th minute Tormenta has a covered shot from just outside the box, which is hard and low in the far corner. The goalkeeper has no chance: 1-2. 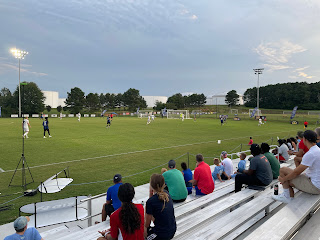 There are no more goals and the game ends 1-2. A deserved win for the clearly better team. All in all, a fairly classic USL Division Two game. A soccer academy with no roots or stadium, playing for a hundred fans/customers, at modest levels. In fact, only the remarkably poor pitch stood out from other USL League Two games.

Posted by Grondhopper at 6:06 PM No comments: