Last time I was in Athens, two years ago, there were no games to see, so this time around I was happy to see that the season wasn’t all over yet. The Superleague Greece (First Division) was in the play-off stages, with the game between the big teams from Athens and Thessaloniki mired by violence. As I have seen all the major teams of Athens already more than two decades ago, I decided to go and see a game in the Football League (Second Division). My Dutch friend WL, who has lived in Athens for decades, went with me, which was not just good for company but also for directions – turned out that the bus line we needed had been discontinued a year ago. So, after two different buses, and an almost one-hour travel to the outskirts of Athens, we arrived in a very sleepy suburb of Acharnes, where the effects of the economic crisis are much more visible than in the heart of Athens. 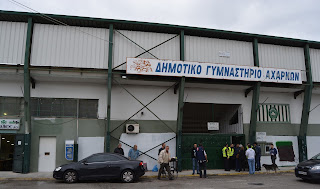 Athlitikos Omilos Neos Acharnaikos was created in 1938, but only founded in 1959 – I also don’t know why. Until 1961 they were known as Yperochi Menidi – Menidi is another name for Acharnes. Their colors are green and white and their logo is a four-leaf clover, which makes them look very similar to Athens powerhouse Panathinaikos – although they are not officially connected. Until the 1990s they played in local divisions of Athens. 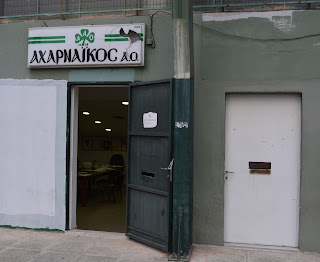 After a cup of coffee in a far too modern café close by, we return to the stadium, where we buy tickets (€5) for the main stand, which turns out to be the only of two stands open today. Fortunately it is covered, as it looks like the rain will return during the game. 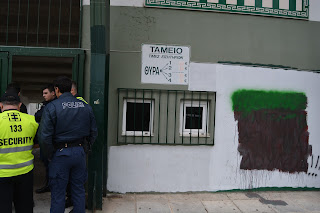 Acharnes Stadium is an old concrete stadium in a residential area, probably from the 1950s, which has seen little investment since its opening. It has a capacity of 4,450, but today there are barely 250. Only some 5 percent are women, rest mostly older, local men. No one had the made the almost 300 km (180 miles) track from Karditsa in the North of Greece. 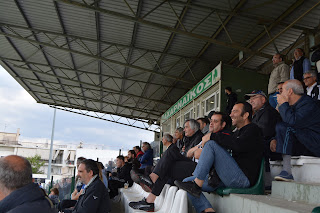 The weather has been terrible all day, i.e. cold, grey and rainy, and the pitch is in a horrible state. This doesn’t help the already limited players:both teams are on the lower end of the table. The pace of the game is low, the control poor, and the passing cautious. And then, out of nowhere, in the 8th minute, the hosts shoot from 25 meters and the goalie completely misses the ball: 1-0. I start to wonder about the Chinese gambling mafia. 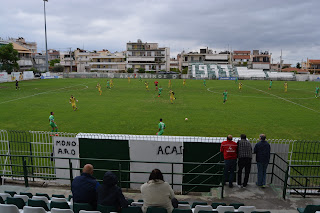 In the 11th minute a free kick of Acharnaikos goes nowhere. Fifteen minutes later a good attack by the hosts is shot at the goalie from close range. Another ten minutes passes in which little happens and most of the audience remains low-key, mostly passing time by talking with each other. 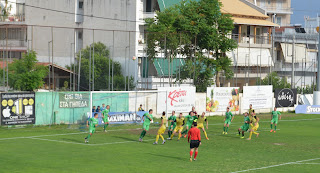 In the 35th minute an Anagennisi corner is missed by everyone and a minute later their free kick is headed well over. In the 38th minute two players get injured and stay on the ground for a while. Then the official clock is moved to 45 minutes and it turns out it was running 8 minutes slow. Half time: 1-0. 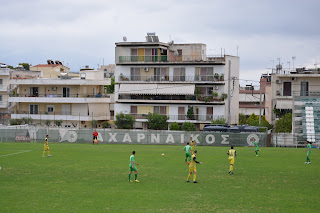 The second half continues where the first half left off: slow pace, poor control, cautious passing. In the 53rd minute Anagennisi has two attacks, one is headed out by the hosts, and in the rebound a visitor volleys the leg of an Acharnaikos player rather than the ball. Overall, the game is full of injuries, which makes it even slower. 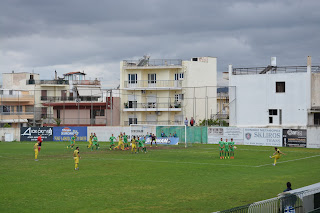 The visitors are pressuring, as the hosts mainly defend. Anagennisi mainly pumps in crosses, which are (easily) headed out by the Acharnaikos defenders. At one attack the home goalie almost fumbles, at another he tips the ball over the goal. In the 66th minute Anagennisi has another attack, this time ending in a low and slow shot, which is saved by the goalie. In the 75th minute the guests finally score; once again the attack is over left and this time it s finished in the right corner: 1-1, which is also the final score. 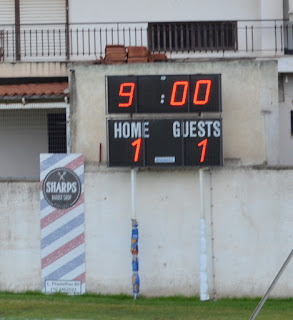 Acharnaikos is a great destination for an adventurous groundhopper, but might not be worth the trouble for the average football fan. I’m just happy WL went with me and didn’t even complain!
Posted by Grondhopper at 5:37 AM No comments: 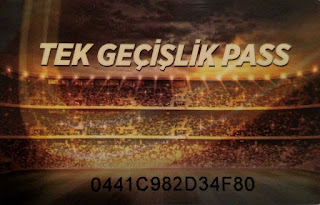