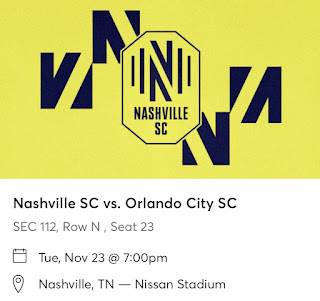 My last groundhop of 2021, a pretty decent recovery year after the dramatic year 2020, the first year in which I didn’t see a game since I was a kid, takes me to Nashville, Tennessee. This is a solid 5 hour drive from my home in Athens, Georgia, and on a Tuesday too – but fortunately the next day Thanksgiving break started, so I could stay the night. 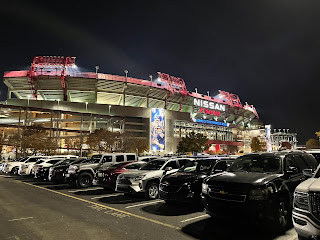 Nashville SC is one of the newest clubs (or as it is called in the US, “franchises”) in Major League Soccer (MLS), having joined the top division in US “soccer” only in 2020. In their second season, they again made the play-offs. They play in the Nissan Stadium, a massive, uncovered ground with a capacity of 69.143, which is the home ground of the Tennessee Titans (American) football team. Next season they will play in a brand-new soccer-only ground of 30,000. 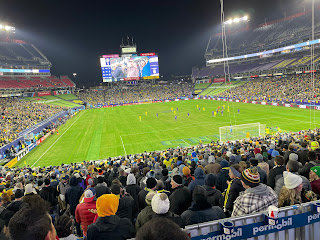 Nashville SC normally only uses the lower part of the stadium, except for corners (which are not used), which is sold out for this game. There are also a few hundred fans on the upper tier. Official attendance is 26,043, which is a very solid number, even if it doesn’t looks so impressive in such an enormous stadium. The audience is quite mixed. There are a lot of Hispanics but few African Americans. Many people wear Nashville gear, particularly scarves, as it is a cold evening. There are a few hundred away supporters, who are either local or made the almost 700 mile (1120 km) track from Central Florida. 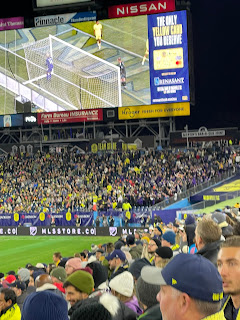 I have paid my ticket online, as is increasingly the only way in the US. So, no real ticket. I paid $53 for the seat but with taxes and various “services” that came to $71.50. Add to that $25 parking and it was, yet again, a ridiculously expensive experience. In the US, “soccer” is really made for the (upper) middle class. Still, the view from my seat is pretty nice. 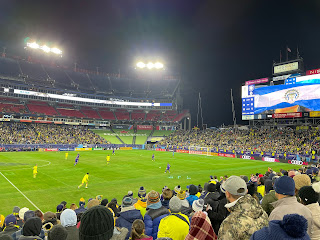 The game starts fairly pedestrian. In the 13th minute a  poor pass back leads to a break for Orlando City and a corner. That corner is headed in childishly easy: 0-1. Just eight minutes later a Nashville striker gets the ball by accident and his shot from just outside of the box is deflected: 1-1. 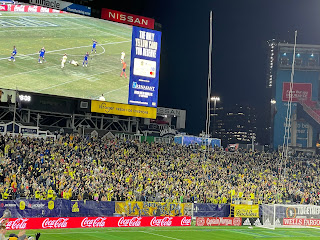 Nashville has more possession but plays slow and predictable. The passing is either too soft or too poor. They create few chances. Orlando City does very little overall, mainly tries to counter. In the 41st minute the home team has a good attack that leads to a sneaky shot in the corner and the rebound is scored but it is offside. 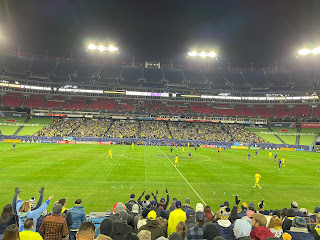 The last few minutes of the first half have a little bit of action. In the 44th minute an Orland counter leads to two poor goal attempts. And in the first minute of extra time the hosts have a remarkable attack with two cheeky heels and then a decent volley (but it is too soft and goes wide). Half time score: 1-1. 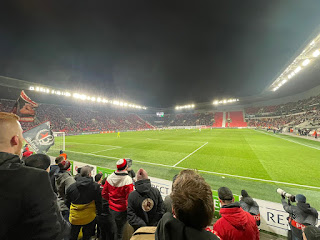 The game does not get much better in the second half. In the 58th minute a couple of hard Orlando shots from outside of box are blocked and wide. But in the 74th minute, after a long period of domination by  the guests, a slow Nashville attack by a striker is finished low in far corner: 2-1! A reward for the home fans behind the goal, who have been singing all game. 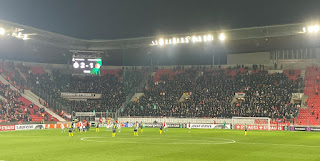 In the 4th minute of extra time, as I’m lost in the parking lot, looking for my car, Nashville secures its spot in the quarter finals of the MLS Cup play-offs. While this wasn’t the best game, and the Nissan Stadium was not the best setting, I will definitely come back in the future, to experience Nashville SC in its new ground. Clearly, the city has embraced its team and the atmosphere is pretty good.

Posted by Grondhopper at 9:53 AM No comments: