On my way to the beach, I make a slight detour to see a game in the Southeast Division of the USL 2, roughly the Fifth Division in the United States. Many of these teams are part of “Soccer Academies”, which are quite pricy pay-to-play soccer clubs that cater predominantly to upper middle class white kids. Florida’s Elite Soccer Association seems no exception, given that they play in the football stadium of Mandarin High School, in a posh southern part of Jacksonville. They play Tampa Bay United, which is about 200 miles southwest, and no fans made the trip.

I arrive almost 10 minutes too late because of a road accident and GPS failure. I don’t need to pay and walk straight walk into the first goal, which is for the home team. There are far more people than I had expected. I guesstimate 300-400 people, mostly children, who play in the youth programs of the Florida Elite Soccer Academy, and their white and upper middle class parents — many dressed in the ugly fluoride shirts of the “Soccer Association”. 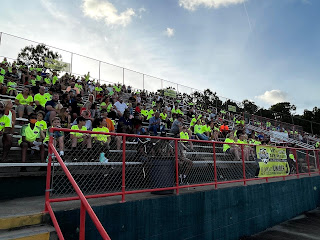 They play on a very dry Astroturf football field, which is quite confusing with all the different lines (white lines for football, red lines for soccer). The players are older than I expected. The pace of the game is pretty low, the passing and control is poor. 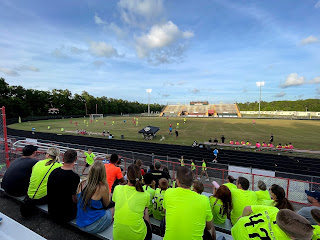 Florida Elite is clearly the better team in the first half, but the quality of play is really poor and barely any chances or shots on goal are created. Half time score is 1-0 and I start to wonder how anyone scored in this game.

The first 15 minutes of the second half the visitors are better is first 15 minutes, but then, out of nowhere, the hosts get two good chances within three minutes. The game remains slow and poor. As Tampa Bay United keeps pushing, Florida Elite has some good counters. 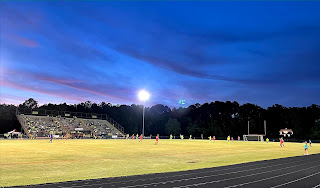 Although the quality gets even worse, particularly in terms of control and passing, there are a few more (half) chances, but nothing goes in. 1-0 seems the maximum that these two teams could create. 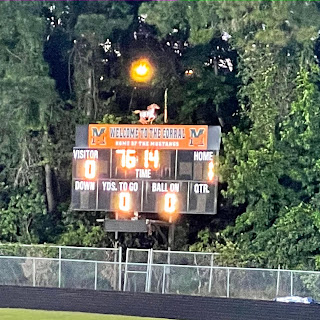 This was a classic low division US game. Played at a football field of a local high school/college, no real soccer club with tradition, and mainly kids of the youth programs in the stands.

Posted by Grondhopper at 3:55 PM No comments:

My first groundhop in 1.5 years (!) takes me to Greenville, South Carolina, two hours northeast of Athens. It is the first home game of Greenville Triumph SC, which has been playing in the USL League One (the third division in the US) since 2019. In fact, last season they won the championship. The team plays at the Legacy Early College Stadium, a 4,000 seater all-bleacher “stadium” of a college prep school. 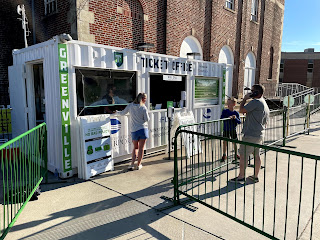 Two days before the game I saw on the club’s Twitter feed that there were only a few tickets left. Although I thought they were bluffing, I decided to buy an online ticket just to be sure and, sure enough, the game was sold out. Because of covid-19 measures, this meant only between 500 and 1,000 (I guestimate). The advantage of this was that I had no one sitting next to me. 😁 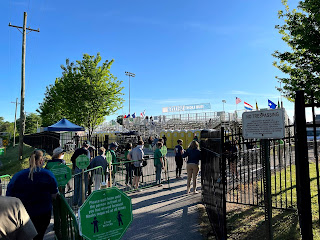 The crowd is very white and local (hence, Southern) with a decent number of women. More middle class than working class and predominantly adults in their 20s to 40s, rather than children. I’m surprised that so many people wear club gear, but I guess this will have been helped by the championship last season.

After a celebration that we are all back, and ready to defend the title, the game is on. It is played on a very dry Astroturf surface, which does make the bouncing limited and predictable. Already after 6 minutes, a free kick is headed through and a lucky backheel volley finds the net: 1-0. Very much deserved, as Greenville is clearly much better, even if they don’t create many chances. 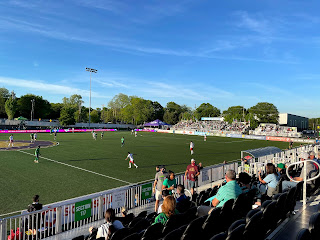 In the 30th minute North Texas has an excellent counter attack with a beautiful cross pass, a smart inside pass, and a strong shot across the goal that goes only just wide. Four minutes later, however the hosts build up well across the pitch and end it with a clever ball in and a good header in the far corner: 0-2. In the 40th minute the guests have a good attack, but the shot goes just across goal. Half Time: 2-0. 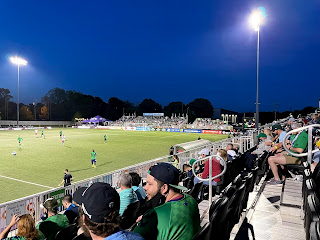 I don’t get bored during half-time as the concessions are so insanely slow that they average roughly 1 drink per 2 minutes — at my drinks stand only one person works. But at least it gives me the opportunity to get a shot of the game from a different perspective. 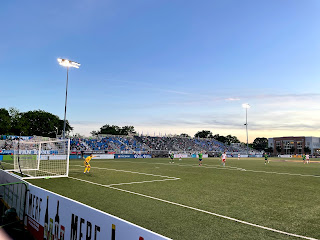 Greenville remains much better in this overall very slow game. In the 57th minutes they lose the ball in midfield, get it back, and with two quick passes the striker gets it in the box and finishes before his (close) defender can stop him: 3-0. Good goal. Almost ten minutes later the hosts have a long ball, the striker controls it but the ball bounces against his hand. The referee doesn’t see it and he finishes cool under pressure: 4-0. 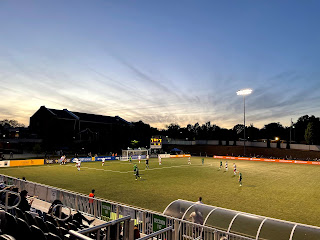 Some ten minutes before the end it gets testy. There is a foul I cannot see, which leads to a brawl and a red card for a North Texas player. There is also red card for one of their players who had already been substituted, who ran onto the pitch like a madman and pushed one of the players in the brawl. But by that time Greenville is happy and no more goals are score. With 4-0, the Triumph has made it clear that they are far too strong for North Texas and that they are a serious contender for the title again. 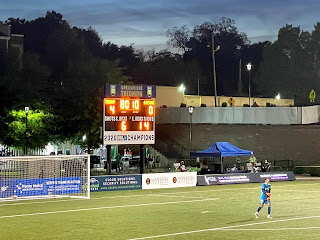 Greenville Triumph SC has done a pretty good job at establishing itself in a Southern town, which does have a growing hipster and foreign population though (including Europeans). The “stadium” takes away much of the atmosphere, but the crowd, which undoubtedly be much bigger when (if?) covid-19 measures will be lifted, is pretty good for the third division in a traditionally non-soccer country (and region).

Posted by Grondhopper at 10:45 AM No comments: