Although the Timbers lost their first MLS game comprehensively, I decided to also make the 900 km (570 miles) drive up to Toronto to support the in their second game. I drove up on Friday to find Toronto still snowy and ice cold. On Saturday I arrived at the stadium over an hour before kick-off (@ 2 PM) and parked my car for a steep $13 (Canadian) at the parking lot in front of BMO Field. 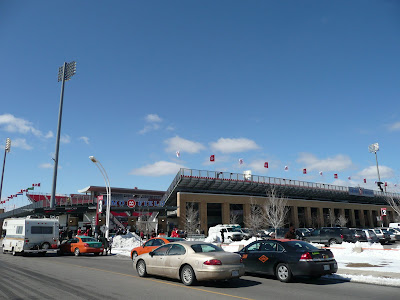 While freezing, it was already buzzing in and around the stadium. Having lost their first game away against Canadian rival, and newbie, Vancouver Whitecaps, TFC fans were nevertheless happy to start their fifth MLS season at home. I went to the ticket office and, after a lot of complications, bought a ticket for section 104, the away supporters section. It costs a good $43 Canadian ($44 American). 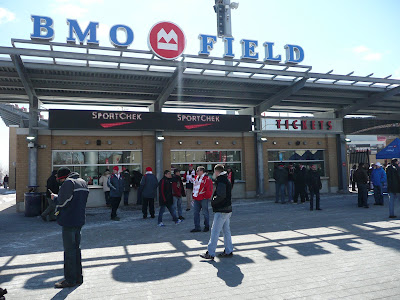 As I walked around the stadium, I saw only people in red and white. Inside the stadium, it wasn’t different. Even in the away section, an hour before kick-off, the few people already there were home fans. I decided to walk around a bit more, and make a stop in the toilet, where I saw the following funny thing. 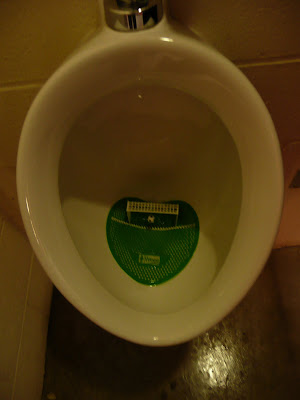 As I wondered around, I met a small group of Timbers fans: two who drove up from Buffalo, New York, and one from Portland. Oddly enough, there was also a Sounders fan from Portland (nice guy, but I still don’t know why he was there). Several times TFC fans would come up to us and welcome us to the MLS and/or to Canada. 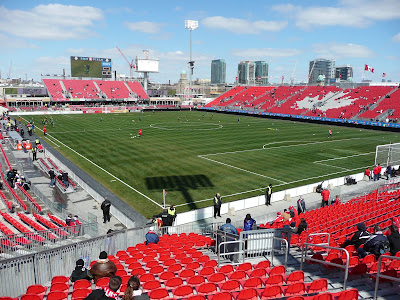 Just before kick-off I returned to the ‘visitors section’, which was packed with home supporters. As all games between an American and Canadian , the game was preceded by two national anthems. I was surprised to see that the Canadian were singing their anthem with even more pride than the Americans normally do. 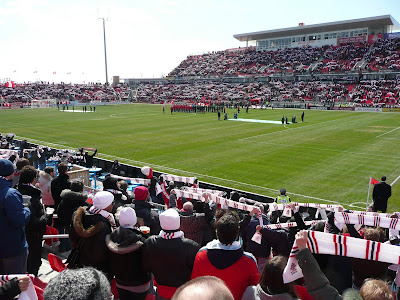 BMO Field is a soccer-specific stadium close to the center of the city, with a capacity of 23.000, which opened in 2007. For this first game against the Timbers 20.084 had found their way to the stadium, braving exceptionally cold weather (freezing and windy). The club had made red-white flags available for all fans, which they happily waved at the beginning of the game. Overall, the fans were not very loud, and only “Toronto’s Elite” were singing some songs. 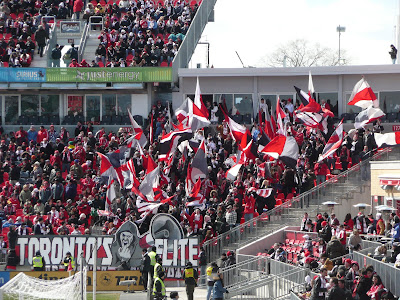 The game started bad for the Timbers, where particularly the defense excelled in mistakes. In the second minute a defender headed the ball directly on the foot of a Toronto , who fortunately short straight at the Timbers goalie. Various individual mistakes followed and in the 15th minute the hosts finally capitalized on it: 1-0. 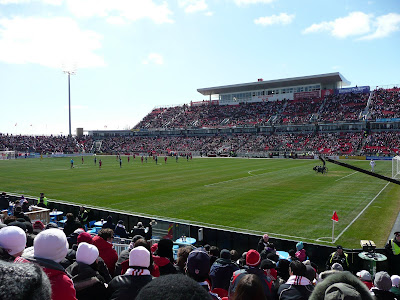 In the 18th minute the Timbers finally got a nice opportunity, with a free kick at 18 meter from the goal, which was kicked blindly into the wall. And while this started several minutes of Timbers pressure, real chances were hardly created because of terrible final passing. Among the few notable events were a scuffle between players in the 33rd minute and a free Portland header (which went well over) in the 38th minute. 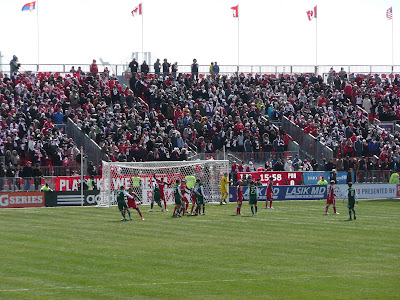 The first half slowly dragged itself to its end. The home fans created little atmosphere and the football wasn’t keeping us warm either. Toronto didn’t dominate Portland, but it had little problem keeping its 1-0 lead. The Timbers still played naïve, but weren’t tested much. 1-0 was a reasonably fair half time score.

In the second half I joined the nine Timbers fans at the top of section 104: two from DC, two from Chicago, and two groups of in total five from Portland. Exposed by the biting wind, we tried to stay warm by singing songs and engaging in friendly banter with a small group of (sometimes) singing home fans a couple of rows lower. 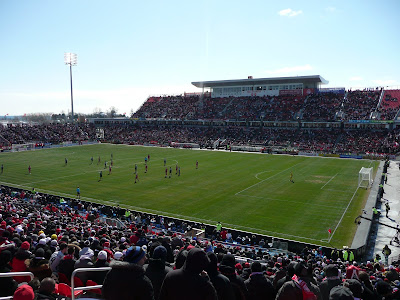 Portland had more of the ball in the second half, but too often all players went into the middle, which left no space for a good attack. One exception was a good attack in the 68th minute, which ended with a shot in the side net. Unfortunately, a minute later this was followed by a great shot from far out, which went over the Portland goalie who stood way too far away from his goal: 2-0. Except for a second yellow card for a TFC player several minutes before the end of the game, that was the last notable action of the game. 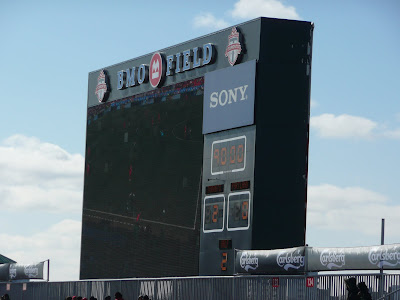 Toronto FC has started its fifth MLS season with a victory over an even weaker team, but will undoubtedly end in the lower range of the table. While it has a solid support base, and really nice fans, there is not too much atmosphere in the stadium. Hopefully this will change in the future, so that it will become a stronghold in the MLS.
Posted by Grondhopper at 6:55 PM 1 comment:

I have never anticipated the start of a new soccer season as I did the MLS 2011. There was no way I was going to miss the first ever MLS game of my Portland Timbers (PTFC), particularly as I can’t make the first home game as I am abroad. So, on Friday me and Ms Grondhopper left for the Mile High City for a couple of days of Spring Break and witnessing history. 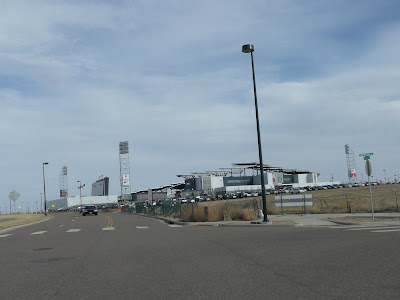 We arrived at Dick’s Sporting Goods Park more than two hours before kick-off, parked our (rental) car on the big parking space, and made our way to the tailgate. We had heard that the Bulldog Supporters Group (BSG) of the Colorado Rapids was throwing a special tailgate bash for the Timbers Army(TA) in the VIP parking lot. 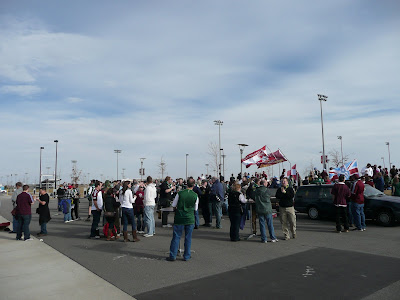 When we arrived, some 1,000 people were already enjoying the food and drink; later at least two more buses of TA would arrive from downtown. Timbers and Rapids fans mingled as one happy family with some occasional friendly banter (i.e. some singing). I later heard that it was the biggest tailgate the BSG had ever organized, with 7 kegs (instead of the usual 2) and a whole pig on the smoker. Great party, thanks guys! 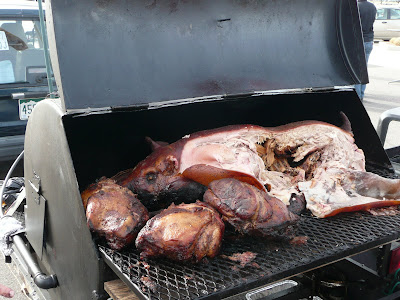 About an hour before kick-off we went into the stadium, walked around a bit, had some snacks (high quality snack at DSG!), and then joined the almost 500 (!) Portland Timbers fans in sections 100-101. Yes, almost 500 fans had made the more than 2.000 km (1.250 miles) from Portland, Oregon to Commerce City, Colorado – although several TA fans came from outside of Oregon, including D.C. and Texas. 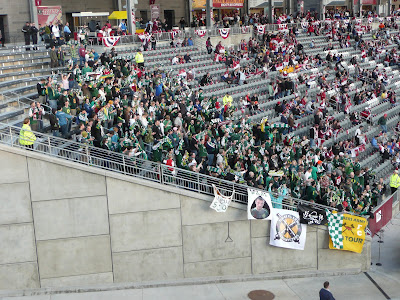 From the beginning the TA was singing and dancing, as if the game was played at PGE Park, oops, Field (really?!). As always, the fans were colorful and diverse, ranging in age from 1 to 70, with many women and bearded men. The most impressive fan was this little guy, who was bouncing on the back of his mother in the first half and of his father in the second. 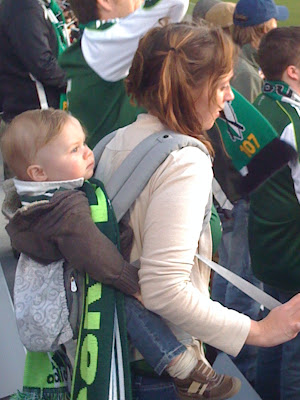 DSG Park is a soccer-specific stadium with a capacity of 19,680, which opened in 2007. The alleged turnout was 17,139, but I am certain there were many more than 2,500 empty seats in the stadium. Kind of disappointing, as this was the opening game of the club that won the championship last season. Much of the atmosphere was organized, as the club had put flags on all chairs. The ‘ultras’ who had been so visible on the tailgate were almost invisible (and inaudible) in the stadium. 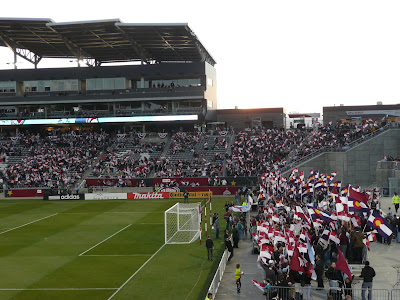 After the showing of the cup and the national anthem, history was finally made, and the first MLS game of the Portland Timbers kicked-off. The first minutes showed that the Timbers defense was either nervous or incompetent, as mistake after mistake was made. In the 8th minute PTFC was punished, in part by poor goal keeping, and got its first goal scored against them: 1-0 Rapids. This didn’t stop the Timbers Army from singing, however. 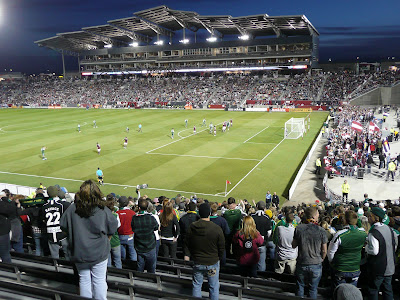 The following fifteen minutes the Rapids dominated the game and the Timbers created only one chance, which was lobbed over the goal. But then, as I was walking around the stadium to get some extra pictures, disaster struck: in both the 29th and 30th minute the Rapids scored: 3-0 after 30 minutes. 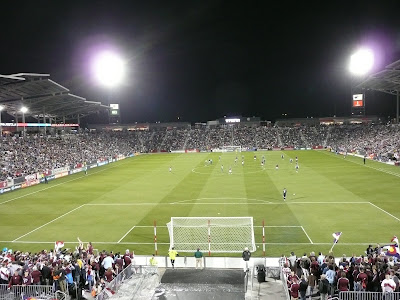 The amazing thing is that, while the Rapids were the better , they had shot only four times at the Timbers goal, but scored three times. At the same time, the Timbers probably shot five times at goal during the first half, but no shot was threatening. The newbies got a lesson in efficiency. But the Timbers Army didn’t care, this was a historic event, and we kept on singing. Half time: 3-0.

The second half was much more of the same, although the Rapids pushed even less hard. In fact, while the hosts were the better, and particularly more experienced team, they were far from impressive. That said, the Timbers played weak, naive and very predictable. 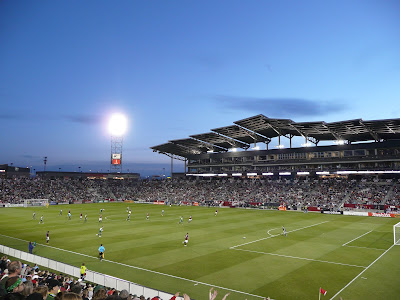 The most important thing was, however, that the Timbers didn’t give up and kept pushing for a goal. And, in the 80th minute, they and the fans were rewarded with a good goal by who else than striker Cooper, who scored Portland Timbers’ historic first goal in the MLS. Time to party!

The last ten minutes didn’t change much, with the Timbers trying and the Rapids easily controlling the game. Hence, the 3-1 victory of the hosts was never really in doubt. In the end, the result was perhaps a bit inflated, but clearly reflected the difference in quality between the champions and debutants. Both fans seemed happy though, as the home fans has their first victory and the away fans had their first MLS game. 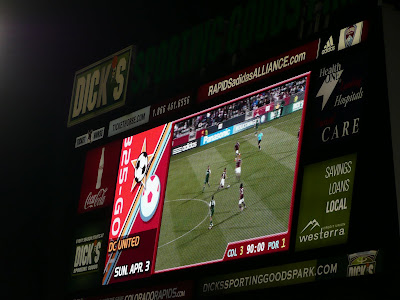 After the game, DSG Park emptied quickly, except for sections 100 and 101, where the Timbers Army kept singing and were applauded by the players. I do hope they realize what great fans they are playing for, as no team had ever brought so many away fans to the Rapids as the Timbers Army. 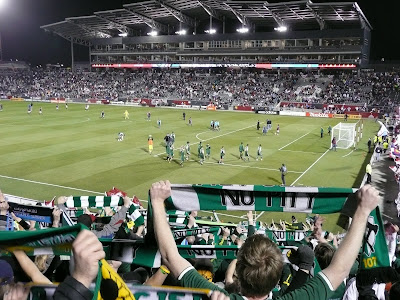 Clearly, this report is not about the Colorado Rapids, which I had visited before (see here). It is about the historic first MLS game of my Portland Timbers. It pays tribute to the 500 Timbers Army fans who made it to Denver to support their team, as well as to the many Colorado Rapids fans who made us feel so welcome. Thanks to all for making this historic game a highly memorable one!
Posted by Grondhopper at 4:15 PM No comments: