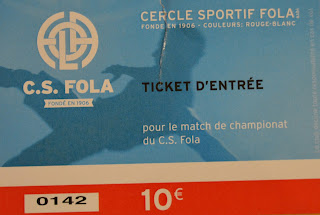 The last game of our groundhopweekend, which included four games in four countries in three days, was in Luxembourg, a destination that I feel is too often shunned by my fellow groundhoppers. Fortunately, my brother shares my soft spot for football in the Groussherzogtum Lëtzebuerg, so on a remarkably warm and sunny Sunday afternoon in October, we drive to the small town of Esch-sur-Alzette to visit one of their three (!) clubs in the Luxembourg National Division, the top division in the country. 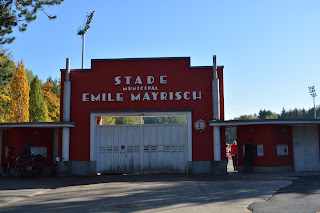 Having parked our car on the hilly small road next to the stadium, we are blows away by the entrance to the Stade Émile Mayrisch, home to the Cercle sportif Fola Esch (Sporting Circle Fola Esch), better known as Fola Esch or simply Fola. It is the oldest club, which was founded by an English language teacher in 1906. They play in the oldest stadium in the country, which has a majestueuse façade, behind which hides a pretty basic football and athletics stadium with one modest covered stand. The total capacity is 4,900. 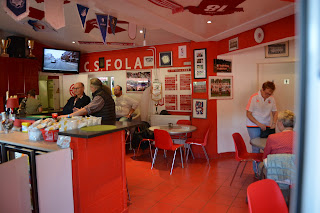 We get a general admission ticket for €10. As we are early, we visit the little canteen and get some coffee, before the snack bar opens up to provide us with excellent fries and sausages. After that, we sit on the simpler bleachers, as the weather is too good to be covered. There are roughly 500 people, some 100 fans of FC Déifferdéng 03, who have made the 10 km trip from neighboring Differdange. 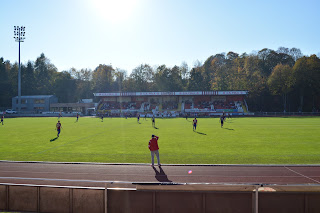 In the 5th minute the visitors head the ball softly at the goalie. Six minutes later the hosts attack, but the player hits over the ball. After fifteen minutes we have the first (weak) shot at goal, from FC03. The next play Fola loses the ball in midfield, FC03 passes the ball to the striker, who shoots at goal from the penalty box: 0-1. Three minutes later, as I’m still circling the pitch to take some pictures, Fola shoots from 20 meters, low, but the goalie jumps over it: 1-1. 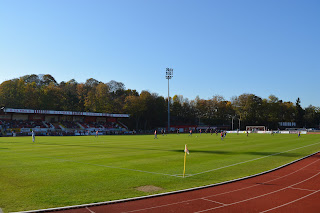 While the pace and quality of the play remain quite mediocre, the game itself is entertaining. In the 22nd minute the Fola goalie tips a good shot wide, and the next minute the F03 makes a good safe at a shot of the striker. Five minutes later both goalies have made another good safe, one after shot from close by, and one from a clever free kick. 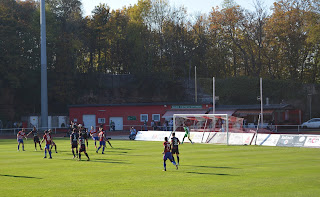 In the 32nd minute a surprise attack leads to a Fola player making himself free, tricking the defender, and then passing to a free teammate, who scores from 2 meters: 2-1. Although there are several more chances, the half time score is 2-1. 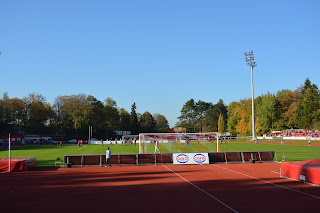 The second half is even crazier. Within the first fifteen minutes Fola scores two more goals from close range, after exceptionally clumsy defense by FC03. In the 70th minute Fola counters, a cross is missed by all, which leads to an easy finish and a stunning 5-1 score. 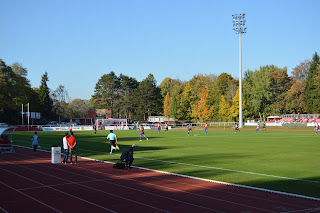 But we are not done yet. As the away fans around us get a bit grumpy, Fola again counters, but this time the goalie saves well. Two minutes later, in the 81st minute, a Fola defender launches a beautiful long ball, which is controlled by an attacker, who goes around a defender, pulls around the goalie, and finishes easily: 6-1! 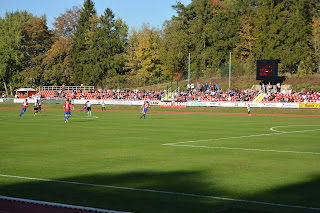 The majority of away fans who are still in the stadium, mainly because of the good weather, get a little bit of consolidation when FC03 finally has a good attack again, which leads to a cool finished: 6-2. Two minutes later, they have another attack, which is finished from 2 meters: 6-3. There are no more goals in the last five minutes of the game. 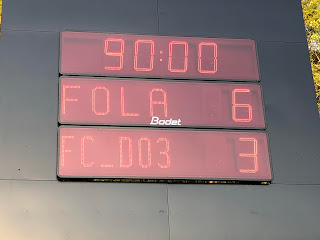 This was my eighth game in Luxembourg and definitely the most entertaining – although almost all have been very entertaining. However, 9 goals, while sitting in the sun and being able to use free wifi, all for just €10 – not to speak of the delicious snacks, which were also very affordable – can hardly be beaten, not in Luxembourg, and not anywhere else.
Posted by Grondhopper at 5:23 PM No comments: 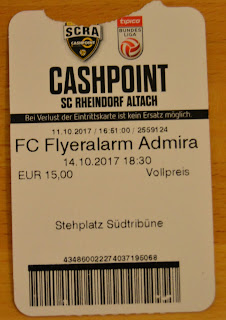 After an enjoyable afternoon in Ulm, we drive roughly 145 km (90 miles) south to Altach in Austria, where there is an early evening game in the Österreichisch Fussball-Bundesliga (Austrian Football Bundesliga), the first division, which counts only 10 teams, which play a “double competition,” an illustration of the dire situation of Austrian professional football. 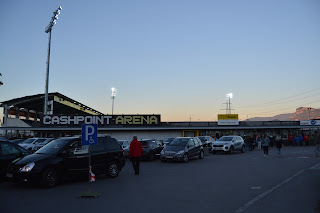 While it has become quite common for clubs to name their stadiums after major sponsors, in Austria the sponsor becomes part of the club name. So, technically, I was attending Cashpoint SC Rheindorf Altach against FC Flyeralarm Admira Wacker. Horrible! We arrived at the Stadion Schnabelholz (commercial name: Cashpoint Arena) some 15 minutes before kick-off, bought tickets for a very acceptable €15, grabbed some snacks, and took our stand behind the goal, just next to the home “ultras.” 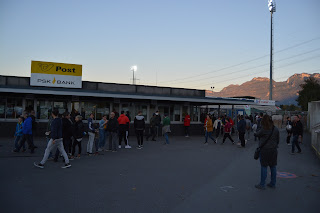 The stadium was built in 1990 and holds just 8,500. However, that is more people than live in the town of Altach, which had a population 6,394 in 2011. SC Rheindorf Altach only made it into the top flight of Austrian football in 2014 and they played UEFA Europa League two years later. This season they are in the lower half of the table, just below Admira Wacker, a long-term minor player in the Austrian Bundesliga. 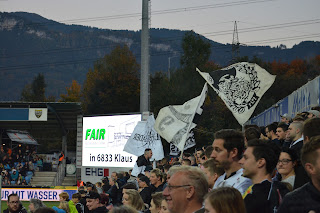 This pleasant Saturday evening there are (officially) 5,072 spectators, almost all local, very mixed, creating a small town atmosphere more associated with second division teams. Only some 10 away fans had made the 640 km (400 miles) trek from the outer eastern point (close to Slovakia) to the outer western point of the country (close to Switzerland). 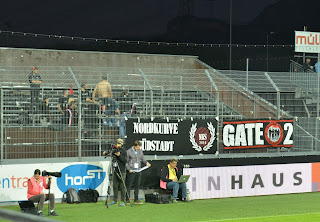 The game is decent, but not too high pace, and mostly between the two boxes. In the 15th minute Admira gets a corner and the header is boxed over the goal. Some ten minutes later the visitors see another chance saved by the goalie. Three minutes before half-time Admira attacks again and the cross is headed cool into the goal: 0-1. This is also the half-time score.

Five minutes into the second half poor defending of Altach leads to an Admira through-header and a cool finish with the outside of the foot past the goalkeeper: 0-2. But three minutes later a wrong cross sails in and Altach is back into the game: 1-2.

In the 74th minute the hosts have a good dribble, is followed by a Schwalbe (dive), which is rewarded a penalty kick (wrong decision). The player who went down takes the penalty himself and, as the iron law of football goes, misses! Cosmic justice. 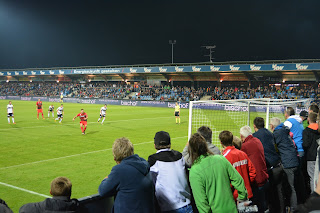 In the direct counter after the saved penalty kick, an Admira header leads to a great save. The following corner is finished with a hard shot at the goalkeeper. A few minutes later the visitors have another great attack, but the volley from up close goes just wide. 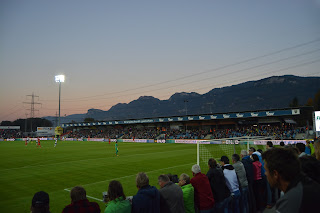 In the 82nd minute Altach counters, a long run, the player seems confused, then shoots from outside of the box, beautifully in the far corner: 2-2!  Both teams have one more good chance before the referee whistles for the last time. All in all, a highly enjoyable game on a very pleasant Fall evening. 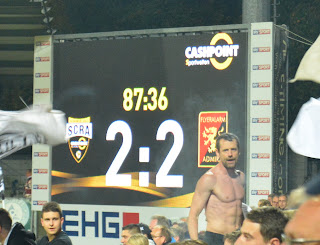 Normally, a club like SC Rheindorf Altach plays in the second or third division, but in Austria, they play in the first division, among (fallen) famous teams like Austria and Rapid Wien. However, unlike those “big” teams, who often play in mostly empty modern stadiums, clubs like SC Rheindorf Altach play in cozy, small stadiums in front of most of the inhabitants of their town. That is what groundhopping is all about.

Posted by Grondhopper at 5:00 PM No comments:

After an enjoyable game in a northern suburb of Paris, the evening before, my brother and I have made our way to Ulm in the south of Germany, for a game in the Regionalliga-Südwest (Fourth Division-Southwest). The SSV Ulm was founded in 1846 (!) as an athletic association (Turnerbund Ulm) and the football club became independent in 1926. SSV Ulm 1846 played one season in the top flight, the Bundesliga (1999-2000), before relegating twice in a row, facing bankruptcy, being set back to the fifth tier, getting back to the fourth tier, going bankrupt again in 2011, etc. 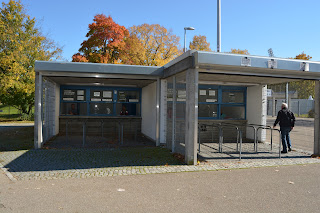 This is the first season back in the Regionalliga and the team is in the lower half of the table. They play FSV Frankfurt, which is near the bottom, so there must be hope. After meeting up with my friend MT, who lives a few hours away, we buy tickets for the non-covered, standing-only parts of the stadium (€9). 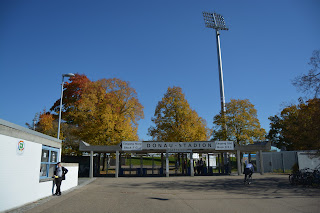 The Donaustadion was built in 1925 and has last been renovated in 1999. It is a classic German sports stadium, which an annoying athletics track around the pitch. It can hold 19,500, but I doubt there have been more than 10,000 at the same game in over a decade. Today the official attendance is 1,570 spectators, of which some one hundred have made the roughly 300 km (190 miles) trip from Frankfurt am Main. 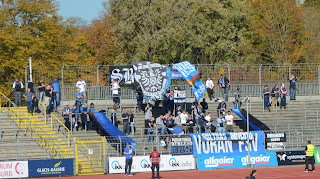 Most of the home fans are (white) working class, various ages, predominantly male, but with quite a number of women. On the more expensive Main Stand there is a bit better mix of class and gender, though there the crown is still exclusively white and mostly older. 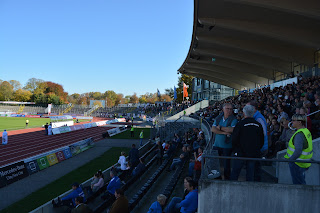 The first 20 minutes are pretty slow and create few if any real chances. The atmosphere in the stadium is good, however. Fans are singing and have brought various banners and flags. At the beginning of the game some of the home fans display two banners, which say: “We can also be different” and “But not today.” Not sure whether it is a protest or sarcasm. 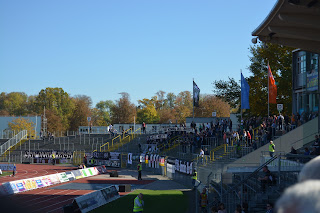 The first half is not very exciting. In the 24th minute SSV Ulm gets a corner, but the header goes over the goal. And in the 44th minute the hosts shoot from 18 meters, but the shot goes just wide. 0-0 is the half time score. 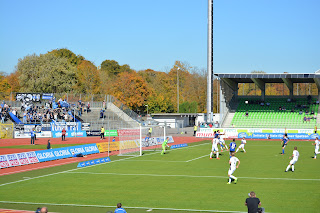 The second half picks up where the first half left off and very little of note happens, except for a header by Ulm, which goes just wide, and a shot by Frankfurt, which also goes just wide. In the 73rd minute, somewhat against the game, the visitors score after a good attack and a header from just 2 meters: 0-1. Eight minutes later Ulm strikes back, after a long attack and a rebound gets deflected: 1-1. 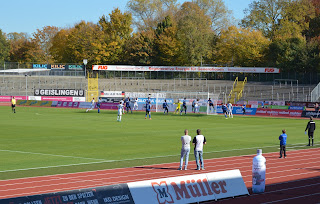 Out of nowhere we have a game. In the 85th minute Ulm has a free header, but it goes over. Two minutes later, by surprise, a Frankfurt player gets the ball in the box, shoots hard and low from 14 meters, and the ball goes through all kind of people into the goal: 1-2. Almost the next minute Ulm gets a corner-kick, the weak header falls on the ground, and another player kicks it in from 2 meters: 2-2. The celebrating home fans gets a last shock in the last minute, when a free kick of the visitors ends in the side net, but the final score remains 2-2. 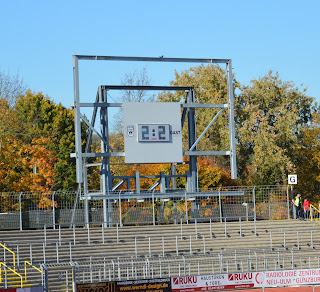 SSV Ulm 1846 is a club that has fallen on hard times, but it is grounded in this small town in the middle of nowhere, and while it lays in the fourth division of German football, it still has a better atmosphere and attendance than most clubs in the second division of other countries. Definitely worth a trip!
Posted by Grondhopper at 4:34 PM No comments: