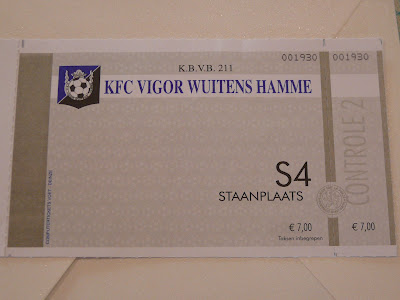 Wow, it has been a long time since I visited a game. With the last game being over six weeks ago, you can imagine how much I was aching to go and see this game. We combined it with an afternoon crossing the Wallonian part of Brabant, in which we got so caught up that we arrived in Hamme only 10 minutes before kick-off. As always, my loyal co-groundhopper J.B. was present, but so was my girlfriend, and social-groundhopper M.G. 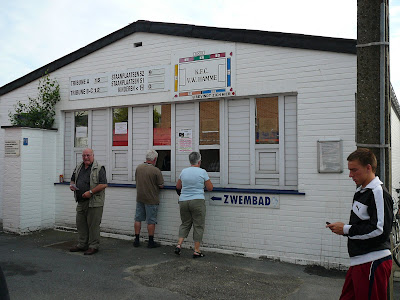 Having parked the car at the parking lot of the Lidl, as suggested by the club’s website, we walked to the Gemeentelijk Stadion (Communal Stadium) to see the friendly game between Second Division team Vigor Wultens Hamme and First Division team AA Gent. As Hamme is only 40 km from Gent, and is in the same province (Oost-Vlaanderen), this is a huge game for the home team. We paid tickets for the standing areas at 7 euro per person, and entered the stadium. 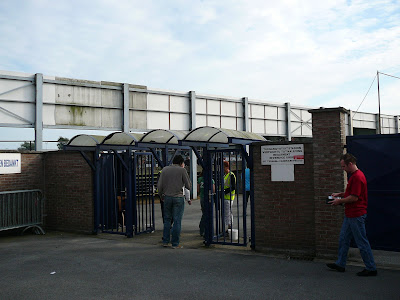 We took some time to circle the ground, taking in the new building of the club, attached to the one main stand, and unsuccessfully following a sign saying “hamburgers & sausages” -- despite this being the biggest friendly of the summer season, with some 500 people attending, there was nothing to eat that evening! After a stop in the cantina, which provides a great view of the pitch, we took our place in the sun. 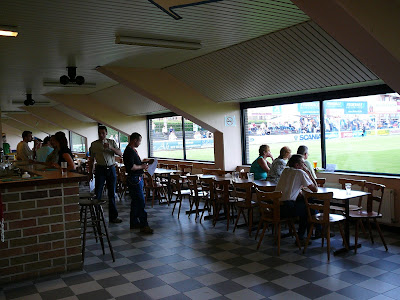 Although AA Gent had come with their strongest team, to the delight of the hosts, they didn’t seem to take the friendly too serious. Rather, it was a practice game in between two Intertoto Cup games, in which everyone seemed most worried about not getting injured. This gave VW Hamme more chance at getting some of the game, and they did. The home team had the first chance, but than had to be saved by the crossbar and the post. 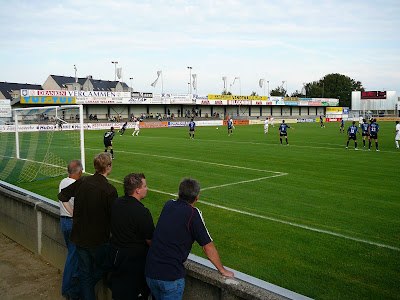 Mainly as a consequence of uninterested defending, VW Hamme was able to score the first goal: 1-0. Gent seemed not bothered, or interested for that matter, and continued to play at low pace and with too many passes and too few shots. Practice was clearly more important than result. And thus Gent continued to dominate the game, but Hamme would go into half time with a 1-0 lead. 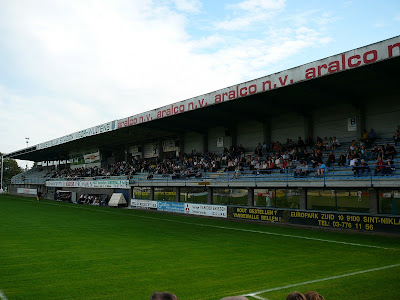 The second half started furious. While we were still trying to get our ice cream – I have never seen such a slow ice cream vendor as at this game – AA Gent scored the equalizer (46th minute). And before some of us had finished the ice cream, I’m not referring to yours truly of course, Gent had gotten ahead by a goal of its captain and best man, the Irish striker Dominic Foley. While Hamme did have some small chances at equalizing, it was again Foley who scored: 1-3. 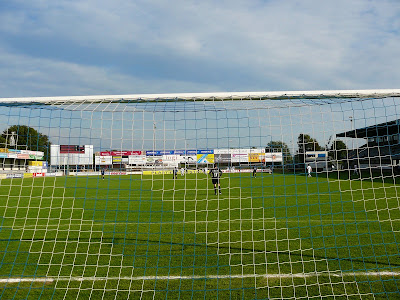 As Hamme continued to fight for its honor, and Gent seemed uninterested in getting a big result, the game wasn’t played yet and the hosts scored 2-3. That would be their last goal though, the rest of the evening would be exclusively for the visitors. They scored twice more, once Foley and once substitute Gregoire in extra time, making it an acceptable final score of 2-5. 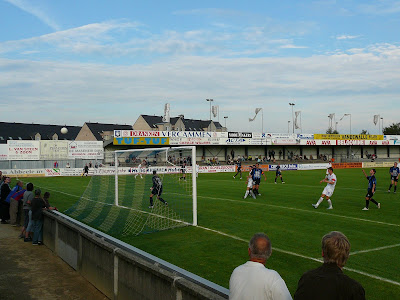 Starved by the un-Belgian absence of snacks in the stadium, we headed to our car and searched for a snackbar. This wouldn’t prove an easy task and it was only after crossing St Niklaas for several minutes that we finally made up on our grease intake. After that, we headed back to Antwerp, a short drive, thanked J.B. for his chauffeuring services, and headed to bed. But, a tired grondhopper is a happy groundhopper.
Posted by Grondhopper at 1:16 PM No comments: