Indiana Invaders – Kalamazoo Outrage (31-05-2010)
If you google “Indiana Invaders”, there is a good chance that you first get the page of a track & field team in Indianapolis, Indiana. This could be seen as an indicator of the lack of professionalism of the Indiana Invaders FC, from South Bend, Indiana. Founded in 1998, the Invaders are an established force in the Premier Development League (PDL), America’s Fourth Division. This notwithstanding, they run the most amateuristic operation I have seen so far (beating the St. Louis Lions). 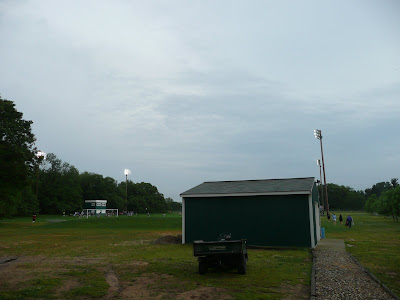 We arrived just in time for kick-off at the Indiana Invaders Soccer Complex, home ground of the Invaders since 2003. We went to the ticket office/concession stand where M. paid $ 8.00 and I paid $ 1.00, because I was wearing a football jersey (although of PSV, not of the Invaders); unsurprisingly, we didn’t get a ticket. :-) 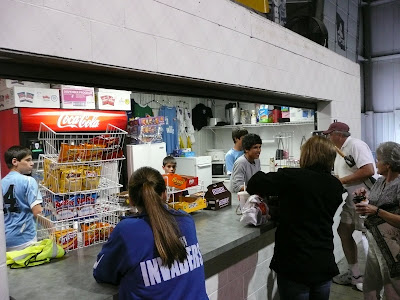 We walked through the indoor hall, which has a full indoor pitch, and toward the ‘stadium’. Wikipedia claims that the Indiana Invaders Soccer Complex has a capacity of 4.985, which seems very generous. It has only one small stand, which this night was occupied by only 75 people (of whom less than 10 where fans of Kalamazoo, which is only 70 miles from South Bend). 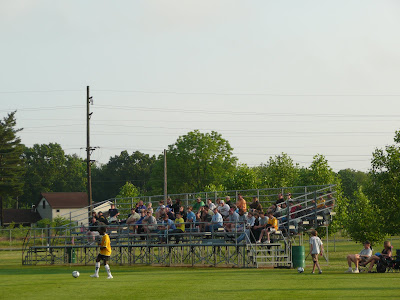 Just before kick-off some players disappeared into the trees to pee, which reminded me of playing myself at some smaller clubs (when I was 11-12!). While going through the players, the announcer literally said: “let’s hear it for number 21, whose name we do not know”… and this was one of their own! 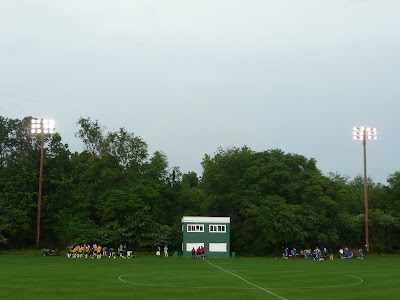 The game started very slow, both teams playing very defensively with 7-8 people behind the ball. The announcer was giving play-to-play commentary, which was better than the more regular shouting of adds and playing of loud music at any moment no one kicks a ball. In the 6th minute the visitors had a decent shot on goal, but it was stopped by the Invaders goalie. In the 15th minute they do it better: a good pass through is met by slow goal keeping and a cool finish: 0-1 for the Outrage! 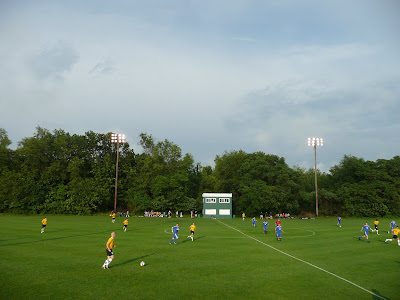 The goal changed the game, with the Outrage sitting back and the Invaders trying to make the game and create chances. Within five minutes they had two shots on goal and in the 25th minute a classic attack over left was cross-volleyed in from 4 meters: 1-1. Despite another good chance for the Kalamazoo goal scorer, half time score remained 1-1.

The second half started surprisingly malicious; in the 48th minute a Kalamazoo player swings for the head of an Indiana player and misses. The referee gives only yellow. Maybe this helped the Invaders get angry, as they played a much better second half. Unfortunately, the game was also slower, leading to some long attacks, but with few real chances. In the 75th minute the Invaders attack over left, but do not finish. 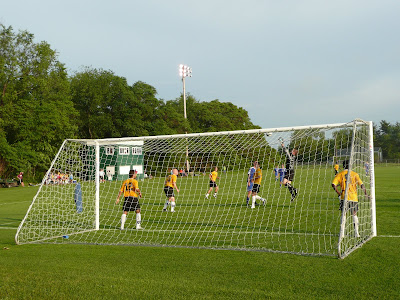 As the hosts miss a free header in the 82nd minute, I am convinced the game will finish in a draw. I am proven wrong the next minute, when a fumble in the Kalamazoo defense enables a 3 meter finish: 2-1 for the Invaders. This was also the final score. 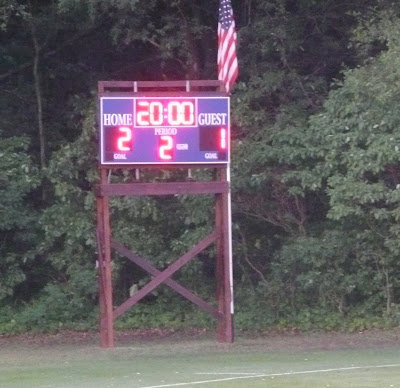 ‘Soccer’ is not a popular sport in the Midwest. This is particularly clear in Indiana, which has only one team, the Indiana Invaders, which plays in the lowest division. Moreover, after more than ten years the Invaders still play in the most amateuristic stadium for one of the smallest crowds in America. Shame.
Posted by Grondhopper at 5:25 PM 1 comment: 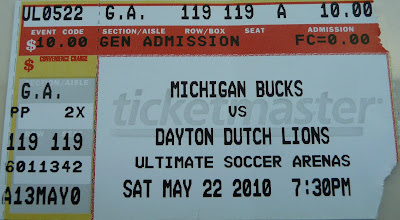 Having watched the Champions League Final in a pub in Ann Arbor with a friend, and some 100 very enthusiastic football fans (admittedly, mostly non-Americans), I arrived a bit late at the Ultimate Soccer Arenas in Pontiac, Michigan, home base of the Michigan Bucks. 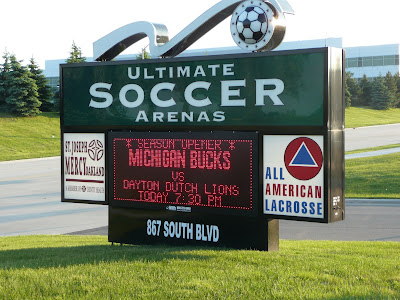 I was somewhat puzzled by the Ultimate Soccer Arenas, as they looked like a large indoor soccer complex. However, I had been to other stadiums where you go through the indoor arena to the outside pitch, which is what I expected here too. 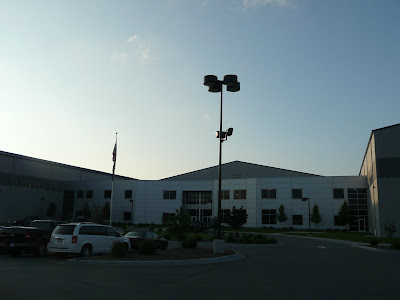 Inside I bought a ticket for $10 and looked to my right, where there were some luxurious concession stands and indoor soccer pitches. I already heard supporters shout, and when I turned to my left I saw the pitch… inside the arena. 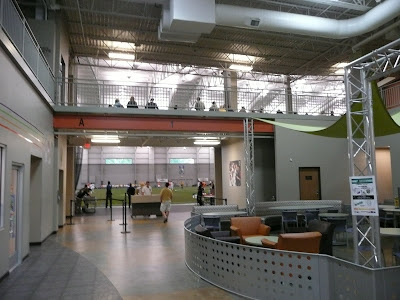 This must have been the first time that I went to a regular football game that was played indoors. In fact, as far as I know, all other PDL teams play outdoors. To be clear, the dimensions of the indoor pitch seemed to match those of (small) outdoor pitches. But it nevertheless looked strange. 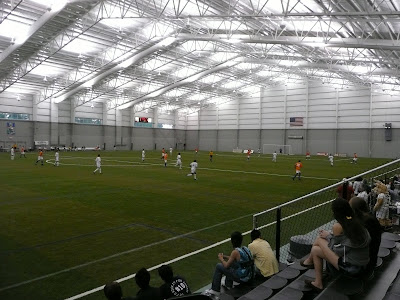 There were probably just over 150 people in the stadium, sitting on the only two bleachers on the one long side of the pitch. Surprisingly, some 50 were Dayton Dutch Lions supporters, many decked in orange gear (including vuvuzelas). I doubt, however, that they made the 240 mile (385 km) drive up from Dayton, Ohio. Rather, they might have been Michiganians of Dutch decent. The Bucks had their own ultras, a group of roughly fifteen ‘men’. 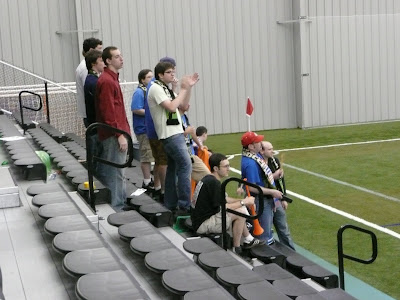 I entered the stadium in the 25 minute and it was still 0-0. The Dutch Lions had most of the game, but played everything though their new target man, 35 year old Van der Haar. But despite his superior technique, he couldn’t create much. Hence, 0-0 was also the half time score.


After an exquisite half time snack at the World Cup Grill, inside the Ultimate Soccer Arenas, I made sure to be back in time. And within minutes the Lions scored through a tight shot in the low corner: 0-1. The Bucks reacted in the 54th minute with a powerful shot, which was saved in typical gracious fashion by Oscar Moens, the Dutch Lions goalie. Moens made a couple of other nice safes, before being very harshly punished for a little push in the box: penalty Bucks in the 82nd minute!

After he missed penalty the Bucks kept pushing and the Lions defending became more and more desperate. It was, however, enough to survive. The Dayton Dutch Lions won their first away game, 0-1. Yet again, they were much better than their opponent, at least on paper, yet didn’t impress for more than half a game. 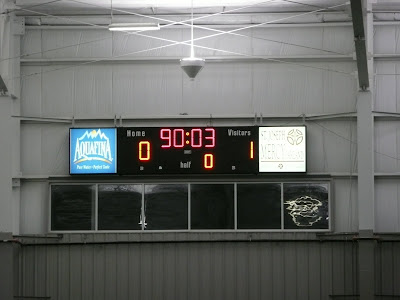 If you ever find yourself in the Detroit area, and the Michigan Bucks play a home game, go and see them. At the very least, you will experience a rather unique feat: an indoor game in an outdoor league. In addition, you will be able to enjoy some of the best stadium snacks you’ll ever find in a football stadium.
Posted by Grondhopper at 1:04 PM No comments: