After our disastrous attempt at a midweek game in Luxembourg on Tuesday, JB and I were determined to make up by scoring a great double hop. And, without even knowing it in advance, we did. This Saturday we were once again reminded that football in Germany is simply geil! And I’m not even starting about the snacks! So, around 11.30 we met at our usual place, Leuven station, to start a hop of some 500 km and 13-14 hours. But it would be well worth the effort! 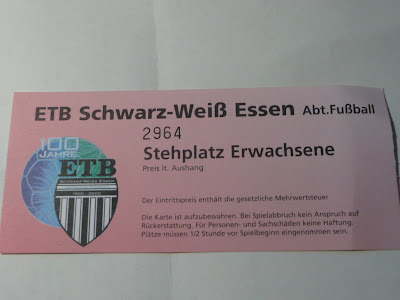 It was not that easy to come up with a double-hop this weekend, as many leagues were still having their winter break (e.g. Luxembourg, lower German divisions). We decided to visit two German teams with a larger reputation that their (current) position would indicate. The first of the two is the second team of the city of Essen: while Rot-Weiss Essen plays in the Regionalliga Nord (Third Division North), Schwarz-Weiß Essen competes in the Oberliga Nordrhein (Fourth Division North Rhine). Although this might change, as the latter are fighting for promotion: who knows, Essen might see a red-white vs. black-white derby next year again! 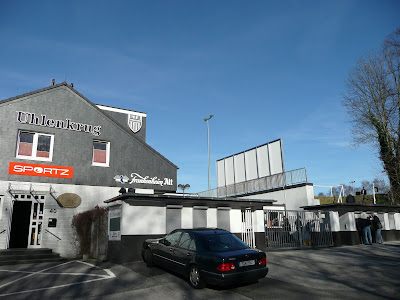 Despite a stop in the Netherlands, to do some shopping (where else can you buy drop?), we arrived well in time at the Stadion Uhlenkrug. Although we were clearly not the first, we nevertheless could park directly in front of the stadium. We bought standing tickets for just 5 euro, and I bought a beautiful old-school woven pennant for just 10 euro. What a start! And there was more to come, much more, including a delicious Frikadelle (meatball) and Bratwurst (grilled sausage), each at 2 euro a piece (including a fresh roll). 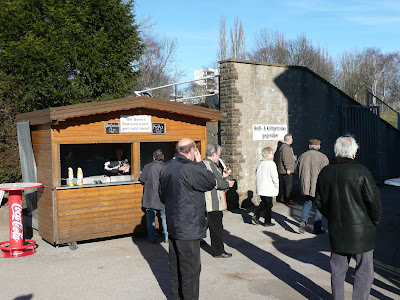 The weather was absolutely gorgeous: sunny, no wind, and some 15 degrees Celsius. It felt like Spring! And with this weather, the Uhlenkrug stadium is the place to be. It’s spacious, open, and despite being run-down, it has atmosphere. For this official Oberliga game against the second team of Fortuna Düsseldorf, some 500 people had made the trip to the stadium, of which a remarkable percentage where men (I estimate some 90-95%, while normally there are at least 15-20% women at German games). There were also at least 100-150 from Düsseldorf (only 35 km south), although it was difficult to estimate, as they were mixed with home fans. 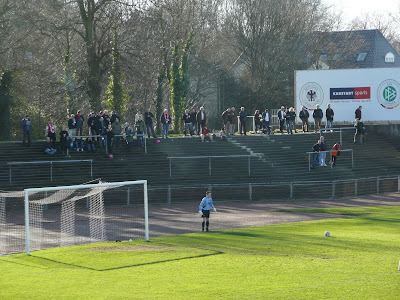 The Uhlenkrug is an old stadium with an alleged capacity of 20.000 to 25.000 (depending on the source). The stadium, like the club (which won the German Cup in 1959!), has seen better days. It has only one covered seating stand and one uncovered standing stand; the areas behind the goals are (now) more or less grass. We joined the most home fans at the huge standing section, which has the letters ETB painted on them (referring to the Essener Turnerbund, of which it is the football section). 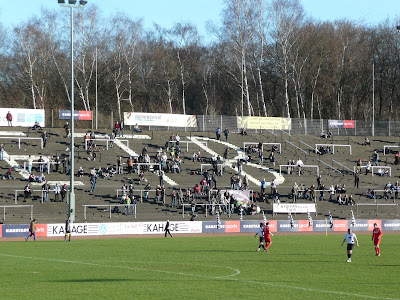 The game started well. Already after 5 minutes the visitors had their first good chance, a volley from 3 meters that was miraculously saved by the Fortuna goalie. This would be the first of many big chances of the ETB, mostly missed because of either good goalkeeping or bad finishing. The rest of the first half would see three more big chances of Essen, and only one for Düsseldorf, a great volley from 10 meter. But despite all the chances, half time was 0-0 and people around us were getting slightly annoyed, despite the beautiful weather.

The second half started with a big chance for the visitors, but they shot from 10 meter at a defender. It would take until the 70th minute for the second chance, again for Fortuna, but they failed again. But then things went fast; well, at least too fast for me. I missed the 1-0 (73th minute) and the red cards for a Fortuna player (76th minute) and an ETB player (78th minute). 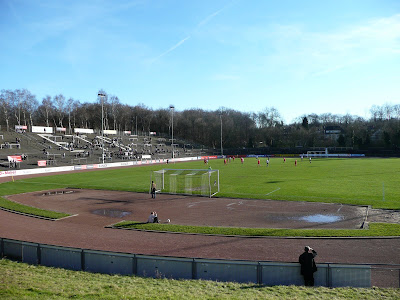 I did see a header from 2 meters missing the goal and a counter, in the 85th minute, where ETB-striker Sasha Wolf scored his second of the day, after a very cool finish: 2-0. This would also be the final score, to the great delight of the stressed fans around us (including these laid-back drummers). 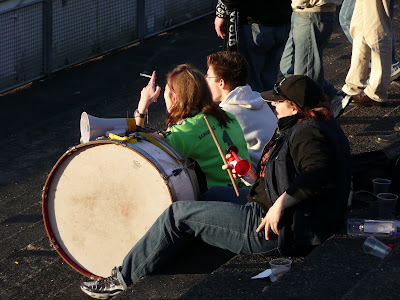 There is no doubt that the fantastic experience at the ETB Schwarz-Weiß Essen was influenced by the great weather. However, there is also something, for the lack of a better term authentic about the club and its stadium. It reminded me a lot of my hop at Frem in Copenhagen. Absolutely a Grondhopper Tip!

After a short snack break in downtown of Essen – as a vegetarian, JB always has a hard time in (German) football stadiums – we drove ca. 90 km north for our second game of the day. Well in time, we arrived. 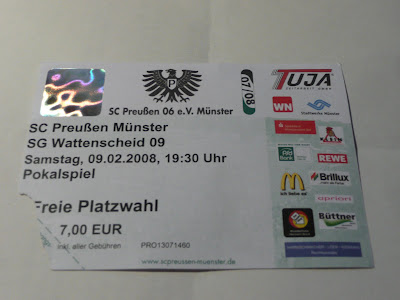 Guided by perfect signaling and impressive floodlights, we easily found our way to the impressive Preußenstadion. As we were quite late, and the surrounding areas were already full with cars, we paid 2 euro and parked our car opposite the stadium. It was directly clear to us, Preußen Münster is popular in town. We had to join an impressive line of people in front of the ticket office, before being able to buy our standing tickets at 7 euro a piece. 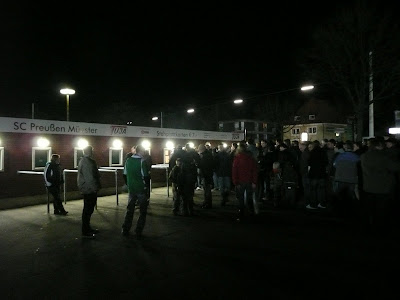 While SC Preußen Münster was never a big team in German football, it has known better days (including two seasons in the Second division in the 1990s). However, it has had some decent exposure in the German Cup (DFB Pokal), where it tends to draw big clubs. The Preußenstadion has been their home since 1923 and has a capacity of 15,050, of which 1,560 seats. It is old, run-down, but very lively. In fact, JB and I were convinced there were some 5,000 people, until the announcer called the official number at ‘only’ 2,661. I guess some 500 were away fans, who had traveled the 80 km from Wattenscheid, a district of Bochum. 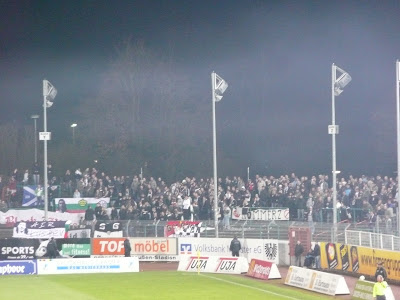 Although I knew the game was for a Cup, I didn’t know for what cup until I asked one of the locals. It seems that access to the national cup competition is restricted for lower division teams, which have to qualify through regional cup competitions. This was a game in the quarter final of the Westfalenpokal (Westphalia Cup), and the winner was only two games away from qualifying for next year’s DFB Pokal. 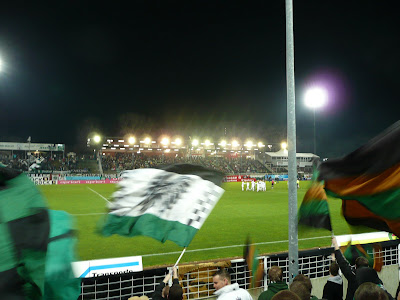 Before the game the atmosphere was already great. The home fans were signing songs and waving their huge flags (oddly enough, two of them had naked women on them). The home fans are divided over two stands, opposite to each other. At times they shout to each other, on side shouting “Preußen” and the other answering with “Münster”. Toll! 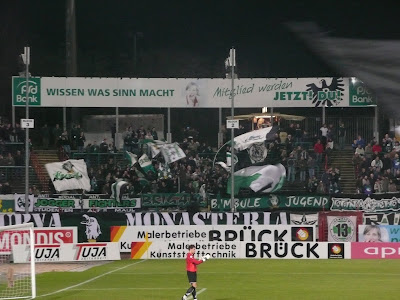 The game started fast and furious. Before we knew it Preußen has a free kick at roughly 20 meters from the goal. While fans will always get excited about these ‘scoring opportunities’, very few players can actually score from that distance. Preußen’s Kara was clearly one of them, as he lifted the ball over the wall and into the goal. Magic! 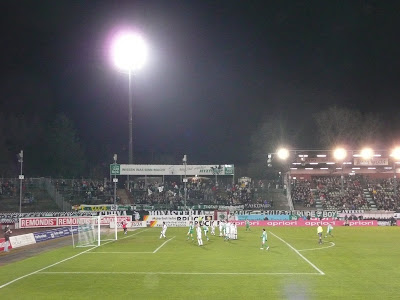 1-0
After that, the game was often stopped and the referee played a dubious role. Rather than being clearly biased against Preußen Münster, he was just really bad. Of course, the home fans saw this differently, particularly when he awarded Wattenscheid a penalty after holding. 1-1 after 26 minutes!

Now the game was on, as only 3 minutes later Preußen was again leading: 2-1 after a good attack and a great half-volley. The game remained entertaining and tight, particularly when the referee sent off a home player in the 40th minute (why, I don’t know). The enraged crowd reacted with singing “10 strong Preussen, we’re singing 10 strong Preussen”. Confused by further odd referee decisions, but still with a 2-1 lead, we went into half time.

The second half started with a clear dominance for the visitors. The young team of SG Wattenscheid 09 – a club that truly has fallen on hard time, as I have seen in the 1. Bundesliga in the 1990s, but they now play in the Verbandsliga Westfalen, i.e. the local Fifth Division — played some intelligent and well-executed combination football, though failed to create big chances. In the 57th minute the referee thought it was time to appease the home crowd, so he gave Preußen Münster a penalty and sent off a Wattenscheid defender (as far as I could see, both wrongly).

So, with only one-third of the game to go, Preußen was 3-1 up and playing 10 against 10. It seemed that the game was over, as the home team was the only one creating chances. While we were mainly enjoying our time by talking about groundhops with two local fans (although one qualified more as a Schalke- than a Münster-fan, by his own admission), the came took an unexpected turn. After a great attack, the visitors scored 3-2 and the excitement was back. After 6-7 minutes of tension, including a great solo and chance for Preußen, the referee finally blew the whistle and the home fans sighed relief: they were in the semi-final of the Westfalenpokal. 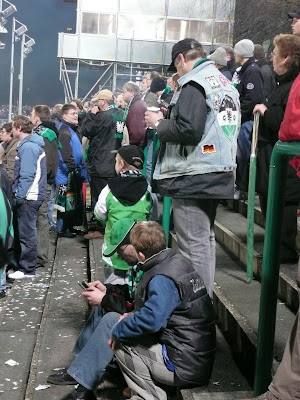 We bid our hosts farewell, and got back into our car. Although we wouldn’t arrive back to Belgium until after 1, we were in full agreement: this had been one of our best hops! Both teams should be absolutely prime targets for groundhoppers, come sun or rain!
Posted by Grondhopper at 12:58 PM No comments:

In an attempt to get the most of my remaining months in Europe, I have gotten even more obsessed with scoring new groundhop scalps. So, on a grey and rainy Tuesday, JB and I set off to Luxembourg for a friendly game. We leave early so that we have plenty of time to enjoy the beautiful capital of this small state. Unfortunately, Luxembourg in February is pretty much the same as Belgium in February: grey and rainy! So, rather than walking through the cozy streets of Luxembourg City, we hide in restaurants and cafes, where we read in a local paper that there is an alternative game, played half an hour earlier, from a team that has no functioning website (not uncommon in Luxembourg). After a short discussion, JB and I decide to take our chances, get back to our car, and set route to…

Niederkorn is roughly 25 km southwest of Luxembourg City. This notwithstanding, it would take us a good hour to find their stadium, the Stade am Deich; which, between you and me, is nowhere near a dyke! After driving through the relatively small town for more than 20 minutes, we finally found someone who provided us with bizarre, but accurate directions. So, roughly two minutes before scheduled kick-off (at 19:30), we drive onto the parking lot of the stadium, when I realize two things: (1) the game is canceled (the lack of flood lights and the fact that the first team is at the practice field give this away); (2) I have been here before, roughly two years earlier, and guess what, the game was canceled then too (because of snow, however). Down but not out, we directly set course back to where we came from.

As the Stade Josy Barthel is very easy to find, and we had passed it on the way into the city earlier, we actually were back in time for kick-off of our original game (at 20:00). And guess what… that game was canceled too! So, in the end we had driven over 400 km to see not one game… not, but two games… not! Let’s hope we are more successful this Saturday!
Posted by Grondhopper at 2:10 PM 1 comment: