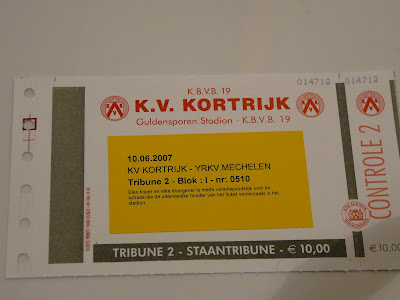 Being back in good old unfortunately also means less groundhopping. Moreover, with most European leagues having finished, it is almost impossible to still find games… almost! In the competition is finished with various play-off games for promotion/relegation. The most interesting is a poule competition for a spot in the Eerste Klasse (First Division) between four teams. This year the competition is between four Flemish teams, three of which from the province: , Antwerp FC, KV Mechelen, and KV Kortrijk. The first one battles relegation, the other three try to get promotion. J.B. and I went to see a game in the fifth round, between the top team and the bottom team: KV Mechelen needed a win, or at least an equal result as Antwerp FC against , while KV Kortrijk had already lost all hope at promotion. This promised to be a special game! 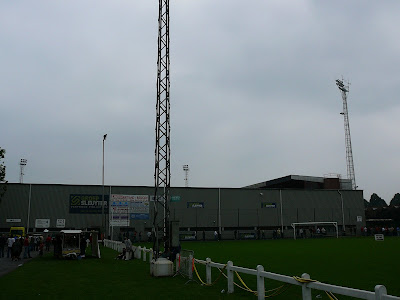 At about 14.00 we left to make the 1h15 drive to , a town in the Southwest of Belgium, close to the French border. While the last time I visited KV Kortrijk, we could park the car practically next to the stadium, this time the visitors were “Malinwa”, not Virton, the team with one if not thé biggest away crowd in Belgian football. So, after 10 minutes of looking for a spot closer to the Guldensporenstadion, we parked and picked up our reserved tickets. Fortunately, we had bought tickets in advance, as people before us were stunned to learn that there were no more tickets. 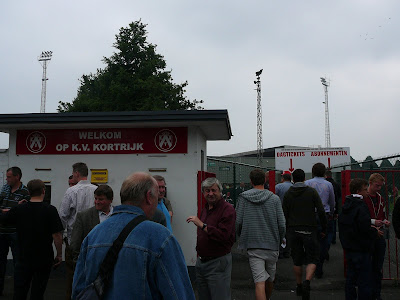 The explanation could be clearly seen in the stadium, which holods 6.122 people, where at least two-third of the stadium was yellow-red, the colors of Malinwa. 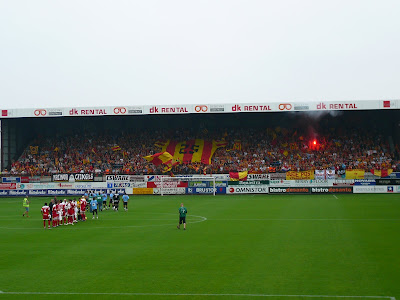 Already walking to the stadium we could here the away fans sing. The had come to celebrate the promotion to the Eerste Klasse. It would be the honorable return to where the team belonged, after having been relegated to the Derde Klasse (Third Division) four years ago to avoid bankruptcy. But before the game started, the home team brought a highly original show of appreciation to its fans. All players (including reserves) wore a t-shirt with one letter, together spelling “Fantastische Fans!!!”. 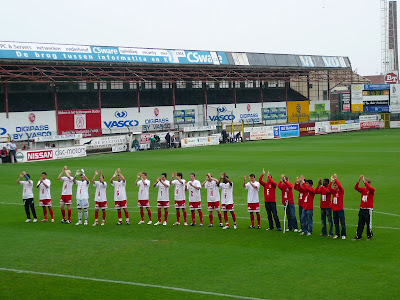 But although KVK had nothing to loose or win, they clearly wanted to make a point. KVM might have expected a walk-over, but instead got one of the toughest fights of the play-off. Already in the 9th minute KVK scored 1-0, to the great delight of the (home) supporters around us, who were clearly upset by being outnumbered in their own stadium. About five minutes later KVM headed the ball on the crossbar. Another five minutes they equalized: 1-1. In the next ten minutes KVK hit the post, while KVM again hit the crossbar (this time the KVK goalie had the tip of his finger on the ball). Malinwa seemed stressed by the pressure, which benefited the relaxed home team, which scored again just before half-time: 2-1. In the following minutes the KVK goalie made two more great saves, but despite increasing KVM pressure, promotion seemed far away at half time. 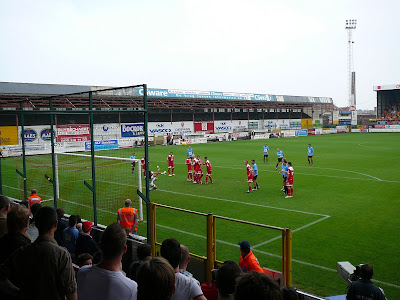 At half time I passed on the opportunity to get me a burger, but instead listened to the radio I had brought. In addition to hearing the first surprising election results, 10 June was also the day of the federal elections in , I was also comforted by hearing the half time score at - Antwerp FC: 1-0. With these scores Malinwa would achieve promotion after all. 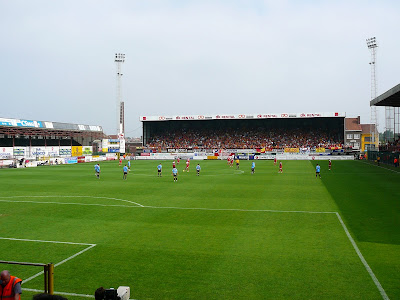 The second half started less exciting as the first half ended. The first 15 minutes Malinwa dominated without creating clear chances. But in the 62nd minute they were awarded a (soft) penalty, which they converted: 2-2. 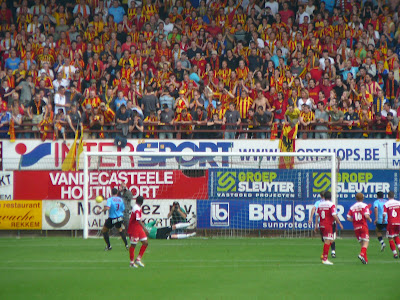 A couple of minutes later KVK hit the crossbar, followed by the deserved third goal of Malinwa in the 67th minute. The yellow-red part of the stadium went mad and accompanied the last quarter hour of the game with loud singing. In the final part of the game KVM had various chances at scoring another, but 2-3 would be the final score. 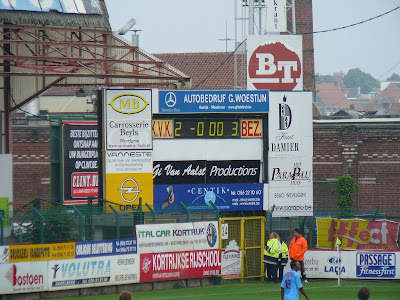 As soon as the final whistle was blown, the players and fans of Malinwa went nuts. The players ran to the visitors stand, which was completely packed with yellow-red fans (some of them no longer wearing their shirts), and were celebrated passionately. 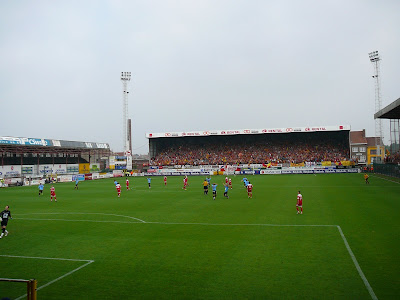 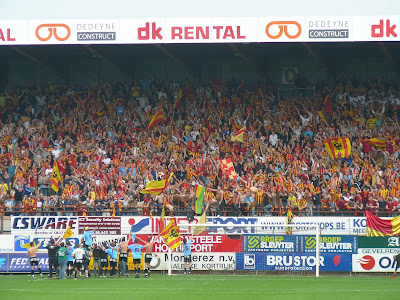 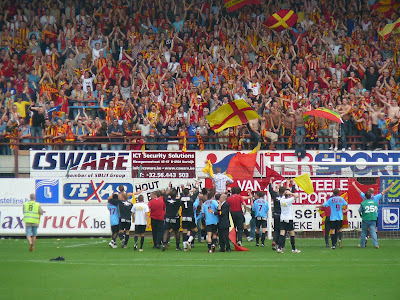 Ok, I admit, this groundhop was for me not really about the home team. As said before, I am a Malinwa supporter (in part to thank them for the win against in the 1998 European Cup Final). Moreover, I had visited KVK already before, in a more representative game against Virton. But this was a historic game, in which KV Mechelen celebrated its return to the top flight of Belgian football. I was very happy to have witnessed it.

Posted by Grondhopper at 6:46 AM No comments: