One day after Notre Dame barely managed a victory against Michigan State, it was team for a game of the real football. So, together with my Brazilian colleague A. we set off for Chicago, roughly a 150 km drive. Unfortunately, we forgot that Illinois is one hour behind Indiana, so we arrived more than 1.5 hour before kick-off. We paid a disgraceful $15 (ca. €10) to park in front of the stadium – there are very few alternatives around – and walked in between some of the tailgaters to the ticket office. We bought tickets for $35 (ca. €25) each, which gave us a covered seat on the long side of the stadium. 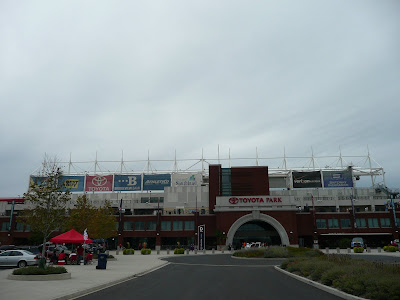 Toyota Park is in Bridgeview, a suburb of Chicago, and is home to Chicago Fire, Chicago Red Star (professional women soccer), and Chicago Machine (professional lacrosse) and is also used for concerts. This typical American soccer stadium opened in 2006 and has a capacity of 20.000. Unfortunately, Chicago Fire never fills the stadium; its record attendance was a 94.1% capacity! 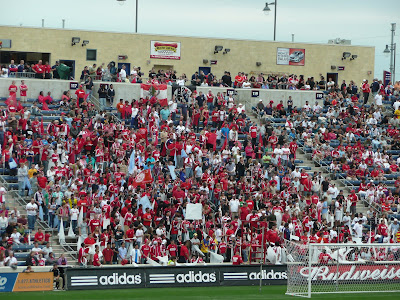 Today’s game was between the number 1 (Chicago Fire) and the MLS champion and number 2 (Columbus Crew) of the Eastern Division. Yet even for this game only some 7,500 showed up at the stadium; even though the website reported an official attendance of 16,549. Prominently among them Section 8, the hardcore home fans, and friends of the Timbers Army. There were also some 50 away fans, most of whom had made the roughly 600 km trip from Columbus, Ohio, in a supporter bus. Respect! 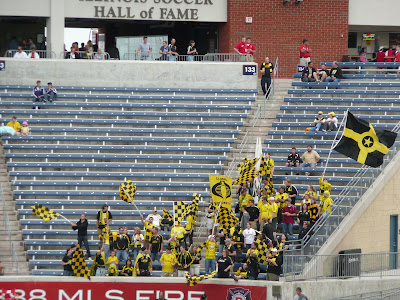 The crowd was classic for MLS games: many kids, youth soccer teams, and Hispanics. Most of the people would wear some type of Chicago Fire merchandise. Also typical, the game starts 6 minutes late – I have no clue why virtually all professional soccer games in the US start a couple minutes late. 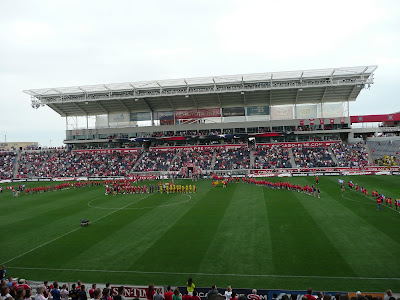 The game started pretty well: after 3 minutes the Crew have to save a ball from the goal line, while two minutes later the Fire finish a good attack over the right with a great volley on the rebound: 1-0. A couple of minutes later Crew defender Pedula makes a nasty foul on Cuauhtemoc Blanco, Mexican international and star of the Fire; he gets away with yellow, but should have been sent off.

Much of the first half the pace is pretty decent and the Fire dominates the game. C. Blanco combines smart passes with useless tricks, which were unfortunately much appreciated by the Hispanic part of the audience. The game flows well back and forth, providing chances to both teams every three minutes or so. However, most chances are finished weakly; the few good finishes are saved. There is one exception, in the 34th minutes, when poor defense of the Crew is punished by a hard shot in the corner: 2-0 (the second for Lowey). Just before the break McBride gets a great chance to make it 3-0, but tries to shoot where he should have headed. Half time score: 2-0 for the Fire! 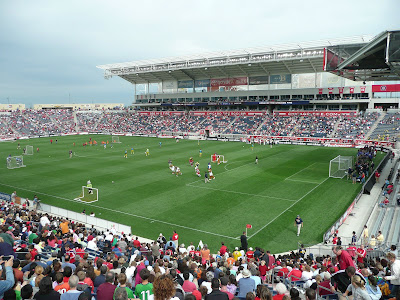 After some good half time entertainment, notably the game between the local sports mascots, we get ready for the second half. Already in the 49th minute the Fire gets alone in front of the goalie, but miss. Six minutes later the Crew is more accurate, finishing a great pass from the left with an easy header from 3 meters: 2-1. The game now starts to deteriorate, with the pace dropping significantly, but the home fans have some entertainment with flags to keep us busy. 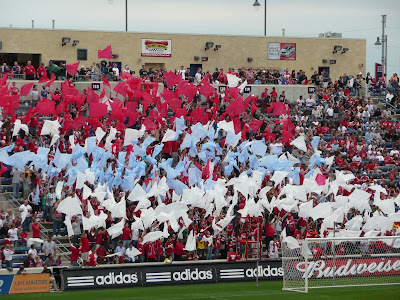 The Fire creates two good chances in the next 10 minutes, but again fails to score. As so often, this is punished. In the 77th minute the Crew gets a penalty after dangerous play by both players. Although undeserved, they do take the gift: 2-2. 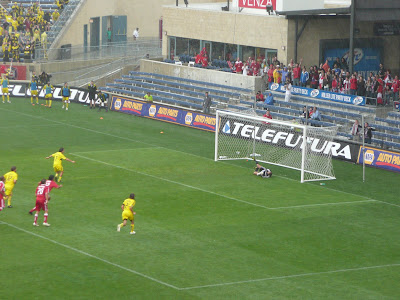 In the last 15 minutes the Crew were the better team. The Fire were holding on, supported by an ever louder Section 8 (despite the rain). Despite some chances on both sides, the final score remains 2-2. A well-deserved draw for both teams. 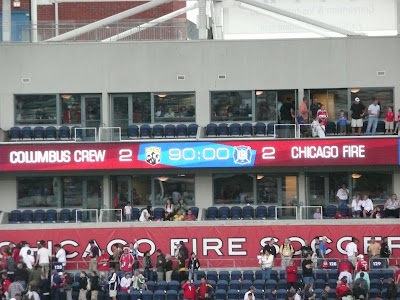 To be honest, I was a bit disappointed by my visit to Chicago Fire, the closest MLS team to my home. The stadium doesn’t have much atmosphere and everything about it is expensive. The team has a decent level, but faltered in the second half. In contrast, Section 8 was silent during most of the game, yet came alive under the worst circumstances: heavy rain and a Fire team on its last feet. Then again, as friends of the Timbers Army, I’ll have to give them another chance to impress!
Posted by Grondhopper at 8:04 PM 2 comments: