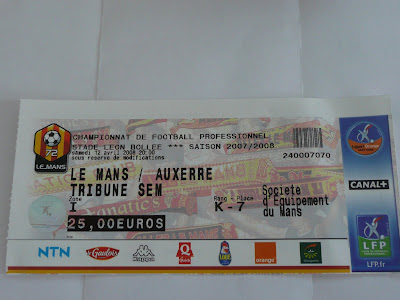 What’s wrong with those websites on French football? Months ahead I had planned to see Laval play on Saturday 12 April, as I was in Rennes for work, and then a couple days before the game I find out it is played the day before. Fortunately, I found an alternative, ‘just’ one hour further by train. So, instead of another game in the French Third Division, I found myself watching a game in the top flight of French football, the Ligue 1, though of a lesser-know team, Le Mans UC 72. Strangely enough, it was (re)founded in 1985, after its predecessor Le Mans Union Club 1972, founded in 1902, got into financial troubles. So, where the “72” stands for is beyond me! 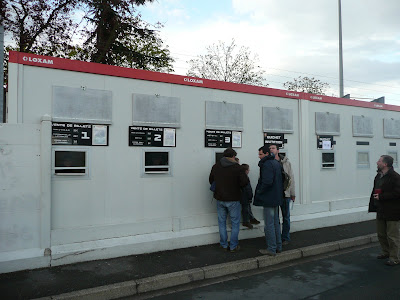 It had taken me 1.5 hours by train to get to Le Mans, a fairly uneventful town under Paris world-famous for its 24 hour car races. From the railway station it was another 30 minutes by foot to get to the Stade Léon Bollée, a modest stadium with an official capacity of 16.500. As the weather had been bad – wet, grey, cold (just like home!) – I coughed up 25 euro to sit on the covered stand. 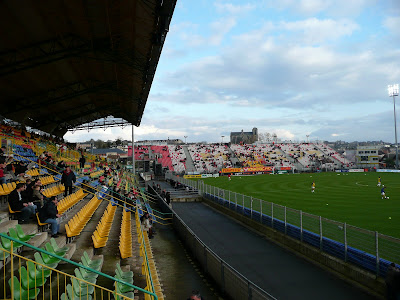 To kill over an hour before kick-off, I circled the ground various times, ate some truly bad stadium food, and checked the (temporary) fan shop; which was remarkably well stocked. Still, the price for nicest fan shop went to the bus of the supporters club, which sold a range of their own stuff. 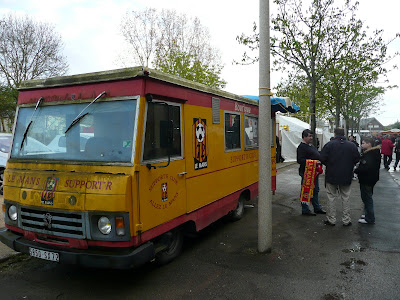 Le Mans has been a regular in the French Ligue 1, but has seldom impressed. This season it is one of the main surprises of the league, fighting for one of the spots for European football. This might explain the fairly decent turnout of some 7.000 (I guess), given the weather and opponent 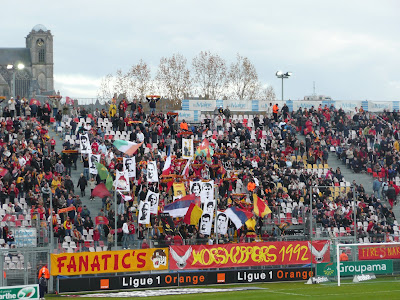 The Association de la Jeunesse Auxerroise is a completely opposite story, having played in the top of French football under legendary coach Guy Roux, it has fallen to the bottom part of the league in last years. Still, it is the only French team that never relegated. Coming from a small town of 40.000, some 325 km away from Le Mans, the roughly 100 away fans provided for a decent turnout. 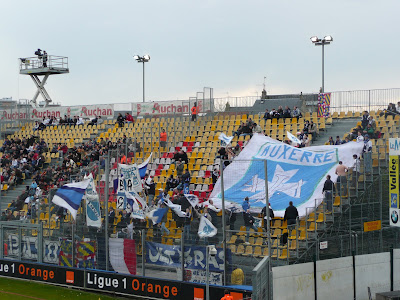 As my cell phone was empty, I was unable to make any notes during the game. What I do remember, almost one week and many other things later, is a rather poor atmosphere, despite the decent crowd and colorful fans.

I also remember how poor Auxerre has become. Having seen them on tv and in away games a couple of time over the past ten years, I remember technical and attractive football. Now there is no player that catches the eye and the team as a whole do not bring much either. Their current place, just above the relegation zone, seems optimal. 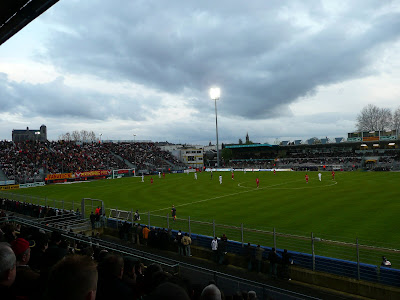 Le Mans is a team without any truly remarkable players, but a strong collective, which plays attractive football. Though I doubt Le Mans will ever be a real challenge to Olympique Lyon, or will go far in the Uefa Cup, should they qualify, they are a strong sub-topper in the French First Division. Their 3-0 victory, in the end, was more than deserved. 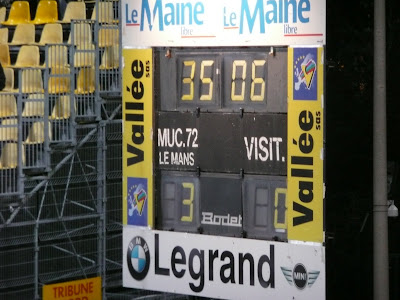 Although I left early, as I had to make my last train to Rennes, I had a nice evening. Le Mans UC72 is a nice reflection of football in small town France: small-scale, but friendly and positive.
Posted by Grondhopper at 12:25 PM No comments: 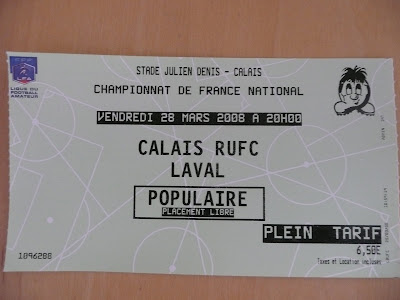 Until the day before JB and I had expected to travel to Sedan, in the French Ardennes, but as so often previous information turned wrong and the game was played on Saturday, not Friday. After some quick surfing we found an alternative, however, on the other side of northern France. So, around 15.00 we took off from Leuven to drive the roughly 225 km to Calais. After a smooth drive, we entered the city, and passed the new stadium, which should become the home of Calais Racing Union FC next season. 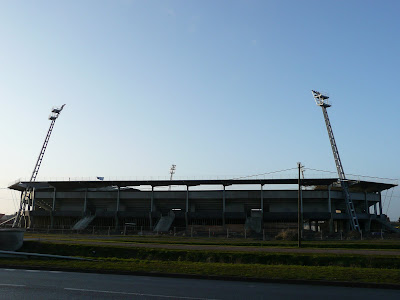 As we would soon find out, the new stadium would be a huge improvement in terms of luxury, though I doubt in authenticity. After a couple of detours because of lack of signing, which did bring us to a ghetto area that wouldn’t be out of place in the worst parts of Chicago, we arrived at the (old) stadium, which goes by the name of Stade Julien Denis and has an (alleged) capacity of 4.900. Though maybe not up to the latest standards in luxury, few stadiums have such a unique entrance as this one. 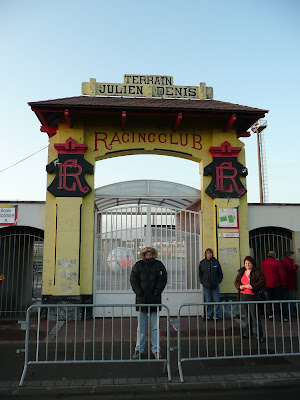 As the stadium wasn’t open yet, we decided to survey the surrounding area in search of food. Clearly, the stadium is not situated in the most prosperous area of the city, and this is putting it mildly. In the end, we found some food, though I held out for the friterie inside the stadium. Some 30 minutes before kick-off we returned to the stadium, bought tickets for the covered standing section at 6.50 per person, and entered the ground. There, we saw one of the most beautiful things ever seen in a stadium: a very old memorial to the club players and members fallen in the First World War. While the names were barely readable, the tombstone was still held in respect. 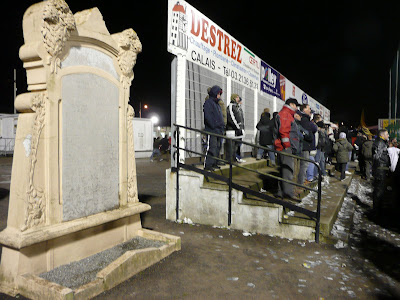 After a portion of petite frites with mayonnaise for 2.50, which tasted unlike anything I had tasted before (I’m still to decide whether this is good or bad), we made our way to our stand. It was fairly busy, and even entertaining, as two drummers got into an argument about who was allowed to stand where. 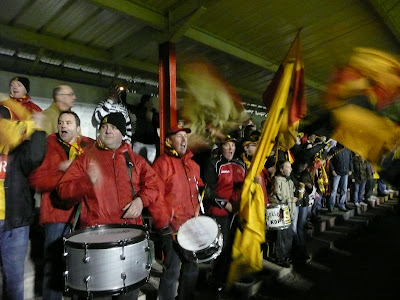 I estimate that some 1.000 people had come to see this game in the Championnat National (Third Division), against Stade Lavallois Mayenne FC, despite the cold and wet weather. Though Laval and Calais are both in the West of France, it is still almost 500 km, so hats off to the roughly 50 away fans! 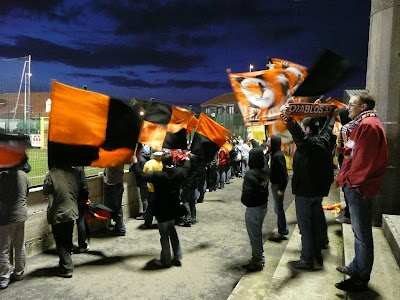 The game started fairly energetic. After only 2 minutes Calais shot from 30 meter and the ball bounced just before the goalie. Some 10 minutes later the Laval defense screwed up and Calais shot over the goal from only 5 meters, while again 5 minutes later the Laval goalie made a great safe to keep it 0-0. Clearly, in the first 15 minutes of the game, the difference in the table was not visible; Calais are just above the relegation position, while Laval is just below the promotion spots. 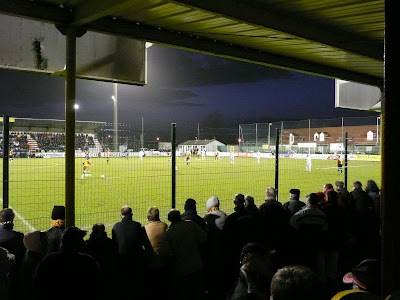 However, this was soon to change. In the 20th minute a Laval players goes alone at the Calais goalie, but fails, and a minute later a strong header goes just wide of the Calais goal. In the 36th minute the visitors finally score, through a strong counterattack, which is finished coolly: 0-1. Despite two good attacks of the hosts in the last five minutes of the first half, half time score is 0-1. 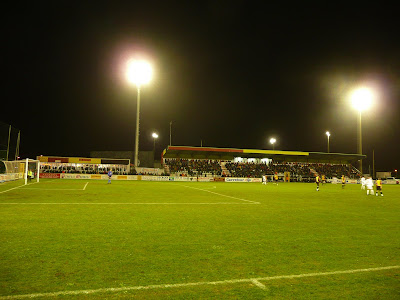 The first 15 minutes of the second half are not very exciting until the last defender of Calais fouls the Laval striker and is sent off. This is the ultimate proof for the fans around us that the French Football Association conspires against their beloved Calais RUFC, as one fan explains to us with tons of convincing historical ‘proof’, and from that moment on the referee rather than Laval is the main enemy. A favorite chant is “on est vollé” (we are robbed).

Just before the last 15 minutes of the game are left, three Laval players go at the Calais goalie, who stops in first instance, and one Laval players scores the rebound: 0-2, game over! Despite being 2-0 and 1 man down, Calais keeps fighting and forces the Laval goalie into some great safes. 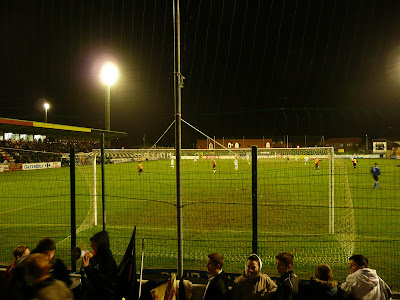 In the end, it is all for nothing, however, as the Laval goalie remains concentrated and stops all attempts at his goal. On the other side, the Calais goalie has to bow once more to the Laval strikers. In extra time they score 0-3. Heavily disappointed, yet strengthened in their essential belief that the Association conspires against them, the Calais fans walk back to their miserable houses in the surrounding area. 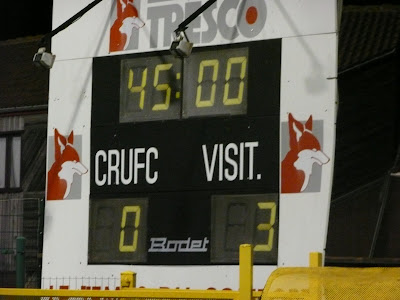 We get into our car, take a last drive through the ghetto (which looks even less inhabited by night), and start our 3 hour drive back to Flanders. We agree that the new stadium looks great, but we are happy we still visited the Stade Julien Denis!
Posted by Grondhopper at 4:49 AM No comments: