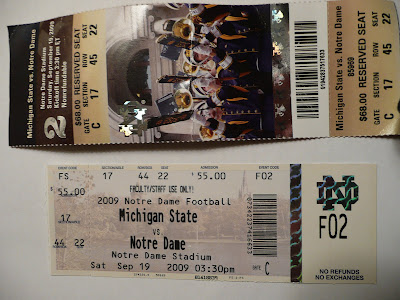 After missing the opening game against Nevada because of a conference out of town, it was finally time for my first Fighting Irish home game. For those who have never heard of American football; first, the Fighting Irish are the sports teams notably the football team, of the University of Notre Dame, where I work this academic year, one of the most famous football schools in the US – even though their heydays are already more than 20 years ago. Second, college football is huge… and when I say huge, I mean H-U-G-E! 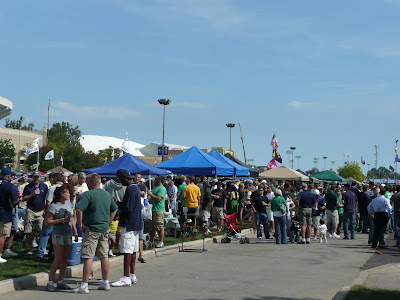 For every home game of the Fighting Irish, which is roughly 6-7 per season, around 200.000 (!) people descend upon the university campus. Mind you, the stadium hold ‘only’ 80.000. The rest come just to experience the atmosphere, which includes tailgating; i.e. putting a grill in front of your truck and having burgers etc. with your friend on the parking lot. Weird? Yes! But also fun. Not impressive enough? The game I attended was sold out… which made it the 207th sell out in a row… in other words, all home games of the Fighting Irish have been sold out since 1973!!! And sold out means, just to remind you, 80,795 people (at a university of just 11.733 and in a town of just over 100,000). 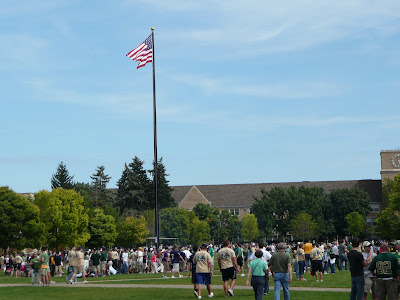 Most of the people are alumni of the university, who come from all over the US to rekindle their college experience. All over campus students sell foods, while the Notre Dame Bookstore sells for more than $1.000.000 in that weekend alone! Add to that the revenue from the tickets and from the tv right, all home games of Notre Dame are live on a major national network (NBC mostly), and you will understand how the Football team brings some $25.0000.000 per year to the university budget! 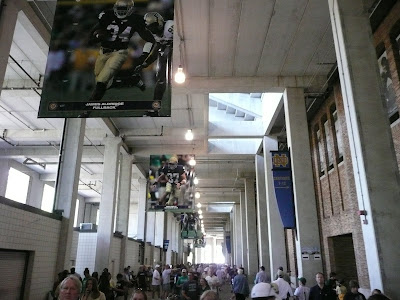 In August I bought two season tickets at $770 for 7 games, which includes a 20% discount ($55 per ticket). This is one of the privileges of being an employee of the university. In fact, this privilege used to be presented as a plus when offering jobs to faculty, who were allowed to sell them with huge profits. This is no longer allowed and those who are caught will loose their ticket privileges for 5 years. As you can see above, our tickets are different and, to be honest, uglier than those for the regular public (who buy tickets through a tombola). 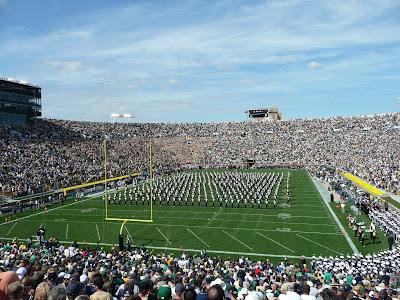 Roughly 10 minutes before kick-off (15.30), M and I take our places behind one of the goals. On the pitch is the Notre Dame band, the biggest university band in the US, which plays everything from Beyonce to Notre Dame’s famous Victory March. Before the game starts, we do not only get the obligatory national anthem, The Star-Spangled Banner, but also the equally patriotic “America the Beautiful” – both are sung by large parts of the audience. After that, it was time for the game. However, before the Fighting Irish start their game, they come to the crowd and get down on one knee for them. Respect! 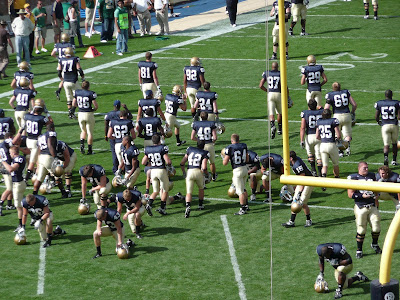 As said before, the stadium was sold out. Opposite to us, in a corner next to the other goal, was the section of the Notre Dame students. Virtually all students will go to each home game and will wear “the shirt” – each year the University of Notre Dame makes a new, unique shirt for the season. This year the shirt is gold (one of the two school colors). After any score of the Fighting Irish, you will see students push up other students (once for each point scored so far). 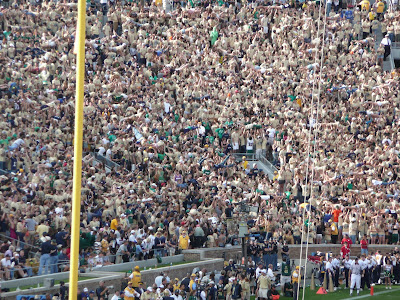 There were also a remarkable number of away fans; I estimated some 2.000 white-green fans at least. True, East Lansing, home to Michigan State University, is ‘only’ 250 km northeast, but it is not very common that thousands of fans will travel with their team. I guess they were attracted by the fact that the Spartans won the last 6 away games at Notre Dame. And with both teams losing last game, they looked for a seventh. 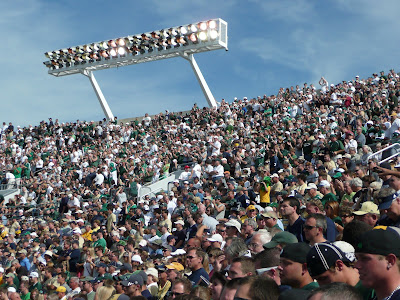 The weather was perfect for a game. It was roughly 24 C with the sun at our back. Around us where locals and alumni, all of them with much more knowledge of the game then me. Most fans were tense and skeptical, after several poor seasons under coach Charlie Weiss and last weeks last-minute defeat against Michigan still fresh in their heads. Moreover, many were convinced that last weeks defeat was the result of biased refereeing; Notre Dame plays many teams of the Big Ten (including Michigan and Michigan State), but is itself one of only three non-divisional college teams. Hence, fans feel that Big Ten referees discriminate against them. And, to be fair, there were some very dodgy calls against both Michigan and Michigan State!

The game started very well for the Irish. After the first period, which consists of 15 minutes pure play which is stretched over almost an hour, the Irish were up 13-3. The second period went terrible, however: 3-14 for the Spartans. Most depressing, however, was a clear touchdown of the Irish, at the end of the period, and therefore the first half, which was ruled out. Not just no six points, which according to replays on tv were deserved, but the key receiver injured himself and will be out for the season. Half time: 16-17. :-( 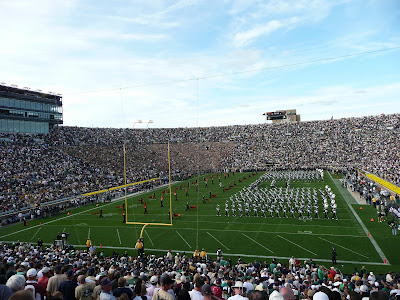 After entertainment from both school’s bands, the MSU band played songs from Bruce Springsteen (although that was almost impossible to hear), the third period started around 17.45 (more than two hours after kick-off!). The Irish were able to grab the initiative again, but played extremely careful. Quarterback Jimmy Clausen threw almost no ball and it took them ages to get the 10 yards down. Still, after the third period we were 26-23 up; much less than we deserved.

The fourth period was going to be a tight one. With just over 10n minutes to go, the Spartans scored their touchdown and conversion: 26-30. Five minutes later, Notre Dame scored a touchdown and conversion: 33-30… but the ball with the Spartans. Slowly but steadily they advance to the endzone… letting the time tick away, so that if they score the touchdown, Notre Dame won’t have time to come back. With less than a minute to go, and less than 10 yards for MSU, the Spartans quarterback throws and… an Irish defender intercepts! Game over and everyone goes crazy. Not a great game for either team, but enough to keep hopes alive and Charlie Weiss in the coaching seat. 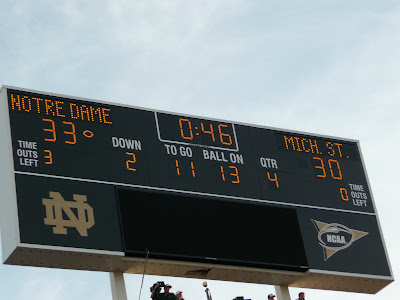 Football at Notre Dame is a special experience. The stadium is a huge, concrete arena filled with passionate fans. Mind you, with a capacity of just over 80.000, it is not even in the top 10 of college football stadiums! However, the descending of some 200.000 people upon the campus is unique. I can’t wait for the next games!
Posted by Grondhopper at 9:25 PM 3 comments: