Given that I will leave beautiful Oregon already next moth, I decided to make use of the later kick-off time, as a consequence of television coverage, and drive up to Portland after class. Moreover, this time I took my fiancé M.G. with me, as she had to experience this rare true football atmosphere in the US too. We arrived well in time for the game, bought a General Admission ticket for $10, and made our ways to the food stands (which are pricy, but have some good stuff; including a killer Italian chicken sausage).

As always, the Timbers Army were ready for the game, waving their scarves, singing their songs, and never relenting (they had even put up leaflets with the words of their key songs, so that newbies could sing along). We sat just behind the 106-107 sections, among the so-called ‘tourists’ – all together, there were 7.556 people in PGE Park this evening. 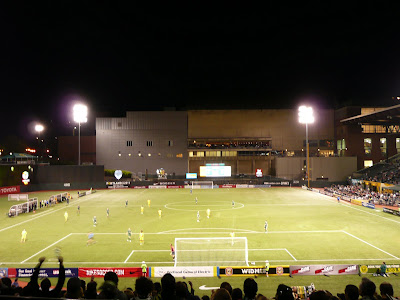 I won’t go into details regarding the game, as I didn’t make notes, and the Timbers website has a decent report. Overall, the level of play was very decent, particularly for a Second Division game; in fact, both in terms of attendance and quality of play it could easily compete with Second Division games in most European countries (including France or the Netherlands). In the first half of the game the Timbers were clearly the better team, but failed to pressure and, most notably, shoot at goal. Still, just before half time, the hosts finally succeeded in scoring: 1-0, also the half time scored. 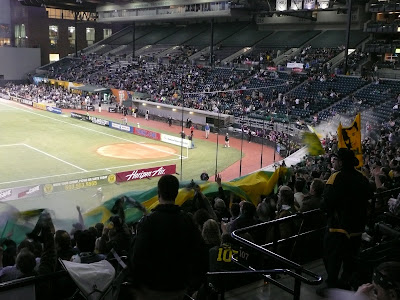 After a half time rugby game between the Oregon Ducks and Oregon Sports Union Rugby Club, the second half started with a good chance for the Timbers. After that, however, the hosts slowed the pace of play even further, continuing to play predictably and passing rather than shooting. The Rochester Rhinos had less possession, but seemed increasingly threatening. Halfway the second half, however, the visitors got a red card, which seemed to seal the game. However, shortly after, the Rhinos scored a shocker equalizer: 1-1. Though disappointed, the Timbers fans kept cheering their team, well into extra time, when, to everyone’s surprise, the ref whistled a penalty (Timbers fans later told me it was because of the violent pushing of a player who was not directly involved in the play).

Not long after the Timbers scored the winner, the game was ended. To be fair, the Rhinos were very harshly treated, even if they did play rough at times. Then again, I was overjoyed that we won in the end. M and I stayed for the usual celebrations, where the players come to the side of the Timbers Army and get the pieces of wood Timber Joey has sawed off a huge piece of timber.