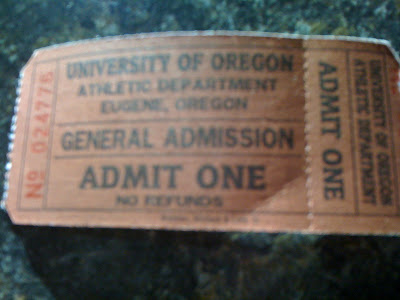 In the absence of professional sports, I decided to go and see a game of the women soccer team of the University of Oregon. At US colleges and universities ‘soccer’ is still mainly a female sports; but among women sports, it is one of the most popular. So, I took my bike and rode to Pape’ Field, in the shadow of the mighty Autzen Stadium, where the UO American Football team plays its home games (more on that in two weeks). 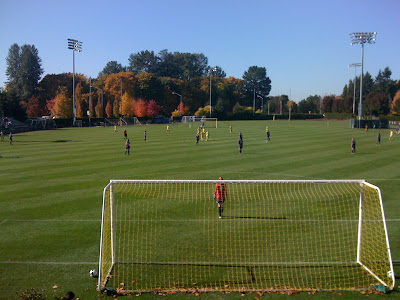 To my surprise, I had to pay 5 USD to get in and, even more surprising, there were some 150 spectators on the one stand. Many were related to the players, I guess – either being friends or family. But there were also quite a lot fans of ‘the Ducks’ (the nickname of the University of Oregon). As my breakfast took longer than expected, I arrived 15 minutes late, and the Ducks were 0-1 down. This seemed fair, as ‘the Huskies’ (the University of Washington or UW) were clearly the better team. 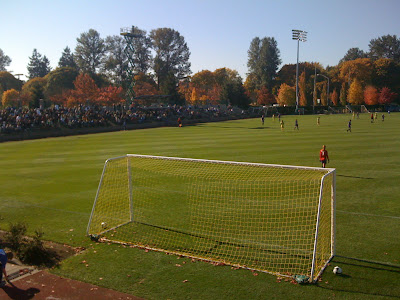 This was the first women soccer game I ever saw in a stadium, I have seen some WC games on tv, and, to be honest, I remain unimpressed. First of all, they simply miss power; in terms of speed (of ball and players). Second, their technique is quite poor. Third, their movement is limited, in terms of space and originality. I was amazed how defensive and disciplined both teams played though. It reminded me of Belgian football. 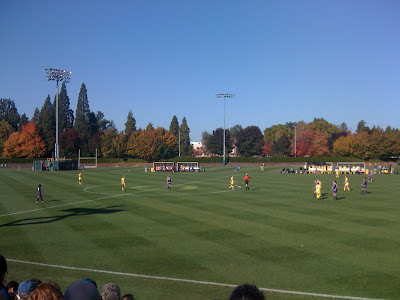 Fortunately it was great weather, and the atmosphere was friendly yet engaged, so I did enjoy the experience. There were few real chances, as most of the game went on between the two penalty boxes. The Huskies remain a tat better, but the Ducks press for the equalizer. They get it in the 72nd minute, with a great 20m shot. Unfortunately, in the 80th minute the Huskies get a free-kick just outside of the box. With a rather lame shot low in the left corner the visitors score 1-2: the winner! 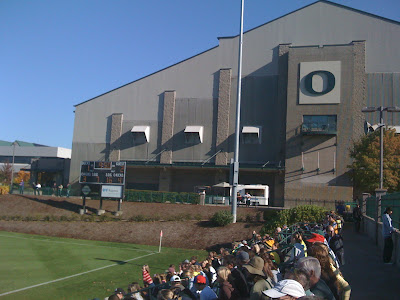 Although I enjoyed the event, the weather and atmosphere did more for me than the football. I know, I’m a sexist, but as far as I’m concerned, women soccer is still miles behind the real thing.
Posted by Grondhopper at 9:51 PM No comments:

The day before my (temporary?) emigration to the United States, J.B. and I made a farewell groundhop. Unfortunately, there were very few option available to us, because of international games, so we decided to see Luxembourg against Greece, despite having visited the boring Stade Josy Barthel not long before. 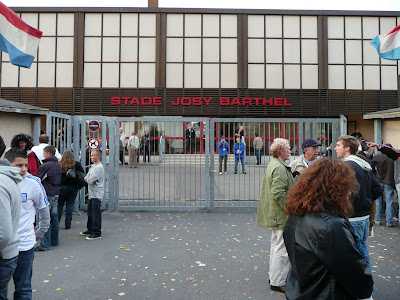 We arrived well in time, but at the expense of not having had time to get a snack on the way there. We bought tickets for the uncovered long side at 20 euro a piece, which was largely occupied by the away supporters. Fortunately, they sold warm snacks there – better said, one snack: a Grillwurst, which was way below German standard and, at 3 euro, much more expensive. With an official attendance of 4.596 people, the national stadium was actually well-filled (it has a capacity of 8,054). As this was a special event, the Luxembourgian Football Union had splashed out on getting not just one cheerleader squad, but two! Both were crap, but the ones from the German town of Trier were a bit less amateuristic. Still, the mostly Greek fans enjoyed them.

The dominance of the away fans was most notable, and painful, during national anthems; whereas the Greek Hymn to Liberty was sang by thousands, the Luxembourgian Our Motherland was not even hummed by hundreds. You would think it was the Greeks who played a home game. Also, the away fans were clearly the more colorful. 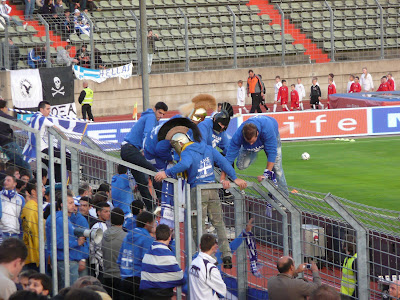 The game started poorly, not too surprising given Luxembourg’s long-standing reputation and Greece’s horrible performance at the European Championship this summer. In the 19th minute the hosts had their first shot at goal, and a couple of minutes later a Greek defender almost scored an own goal. 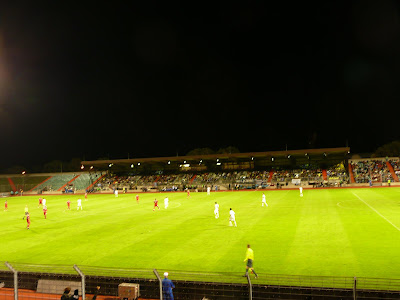 Still, in the 31st the inevitable (finally) happened: after an easy attack over the right wing Greece scored 0-1. Although this clearly lifted a huge load off the Greek side, they nevertheless returned to poor play. The Luxembourgers defended with 10 men, leaving the attack up to the only dark player (and Luxembourger?), who did little else than shoot from wherever. In the second minute of extra time, two Greek players went at the Luxembourg goal for 40 meters and scored 0-2: half time! 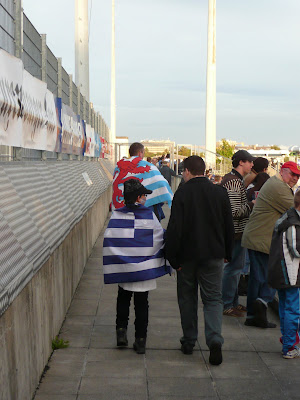 As the evening grew colder and colder, the games went from bad to worse. In the 59th minute the visitors had their first chance of the second half, and ten minutes loser the hosts followed. In the 71st minute the Greeks fired a great volley, which was well saved by the Luxembourg goalie. 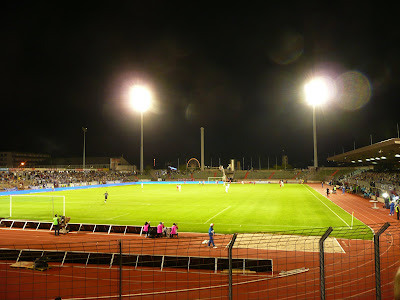 Another several minutes later the Luxembourgers had their one moment in front of the Greek goal, heading it just over. In the 80th minute the Greeks got a debatable penalty, which highly frustrated striker Charisteas converted: 0-3.


Obviously the game was over, but we had to suffer another ten minutes. To the credit of the hosts, they actually came to another chance, in the dying seconds of the game, three minutes in over-time, forcing the Greek goalie to one of his only saves of the game. This not mistaken, 0-3 was a logical result in a game between these two poor teams. 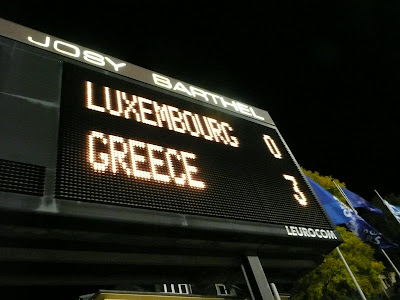 Well, that was the last one for a while. Do keep checking in regularly, particularly in December!

Posted by Grondhopper at 9:03 PM No comments: