After the rather disappointing visit to Hertha BSC on Thursday, I was looking forward to the game of Tennis Borussia Berlin on Saturday. When I was young, and Germany was still divided, TeBe played a couple of seasons in the 2. Bundesliga (Second League). Nowadays they hang around in the lower ends of the Regionalliga Nord (Fourth Division North). More than enough reason to take the S-Bahn up to Mommsen Stadion. 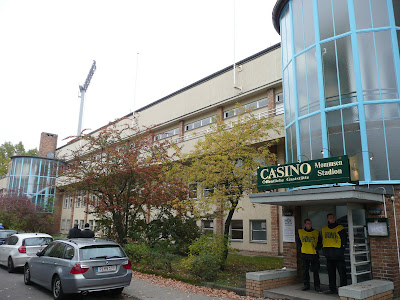 My friend C. and I arrive well in time for kick-off, at 14.00, at the small homey Mommsen stadium. Built in 1930, it has undergone precious little upgrades since. Today it is home to both TeBe and SC Charlottenburg, which plays in the Verbandsliga Berlin (highest non-professional league in Berlin). We bought standing tickets for €8.00 and made our way to the sausages and drinks. 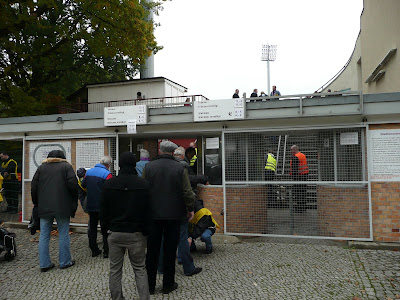 It was a nice sunny winter day in Berlin and officially 516 people had made the way to the Mommsen Stadion; the stadium holds 11,500. The home fans were roughly evenly spread over the one stand and the opposite side, where the good-tempered hardcore home fans stand. The crows is fairly diverse, though mostly alternative types who know each other and talk as much about football as about other things. 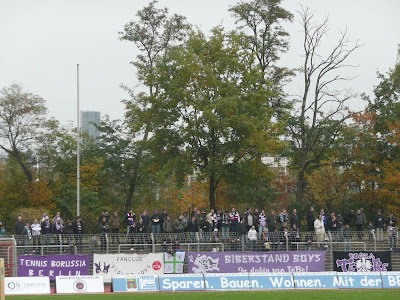 Despite the fact that TeBe is down 0-1 after 2 minutes, the fans around us remain good spirited, joking around and enjoying their beer and company. As is always the case with second teams of a club, very few supporters travel with the team. In this case, even with the first team of VFL Wolfsburg playing Hertha in Berlin the next day, I could count only six away fans. 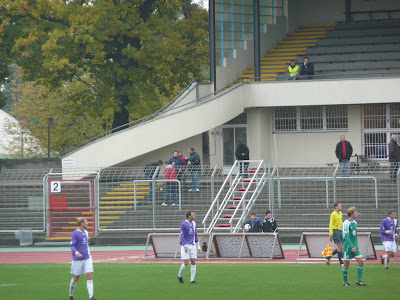 We continued to enjoy the company as well as the play, which was pretty low quality, but entertaining. The guests were clearly superior, but didn’t really push. The home team did its best, but simply lacked the quality. Something the home fans seemed to accept without much disappointment.


The second half started fairly similar, with the visitors scoring the 0-2 in the 53rd minute. After that, the pace went slower and slower, while Wolfsburg seemed content with the now clear victory. TeBe kept struggling, more with itself than the opponent. 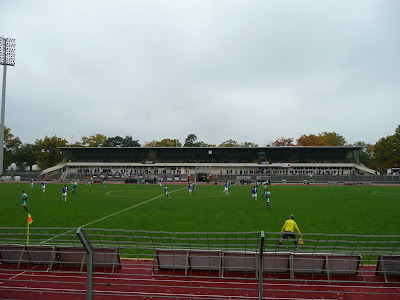 C. and I were amazed how good natured the fans remained. True, they increasingly talked about other things than football, but they seemed real fans. Maybe they just had learned to adapt to the level of the club they support. In any case, 0-2 was an acceptable final result for the hosts, who profited from increasing laziness of the visitors. 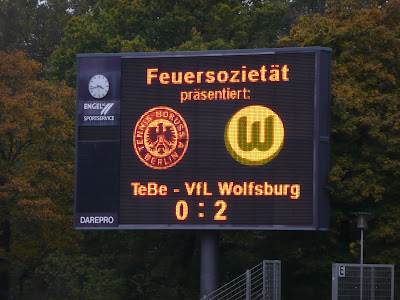 If you are in Berlin, you have many choices for groundhops: Hertha BSC, Union Berlin, BFC Dynamo, Türkiyemspor, etc. However, do not forget about TeBe in Charlottenburg. It is like a trip to football memory lane, but with modern Alternativos as fans.
Posted by Grondhopper at 4:08 PM No comments:

I had to be in Berlin for work, so I made sure I would be able to catch a couple of games. Although Hertha BSC wasn’t very high on my list, I find it a rather colorless team, when I found out they played a Europa League game against the Dutch SC Heerenveen, I had to go. As both teams are having a terrible season, being at the bottom in their respective divisions, I knew the game would be far from sold out. So, I took the S-Bahn from Berlin-Mitte and arrived roughly 30 minutes before kick-off at the Olympiastadion. After some difficulty I found my colleague R., a Spanish football fan of Dutch descent, and we bought tickets for €16.00. 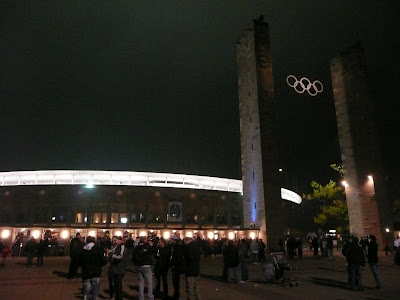 The Olympic Stadion was built for the aborted 1916 Summer Olympics and became infamous during Nazi Germany. It has rebuild several times, most recently for the 2006 World Cup. I had actually visited once earlier, in 1986, to see my Borussia Mönchengladbach win the DFB-Pokal against VFL Wolfsburg (the last time they won anything major). 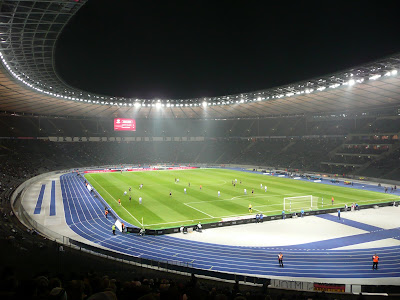 Today the beautiful Olympiastadion holds an impressive 74,500 people. Unfortunately, it mainly sells out for games of Die Mannschaft, the German national team, not for the always underperforming Hertha BSC. This game was particularly badly attended: only 13,194 came, which included roughly 1,000 away fans (the only ones singing). From the beginning the home fans seemed resigned for yet another disappointment, which they also received. 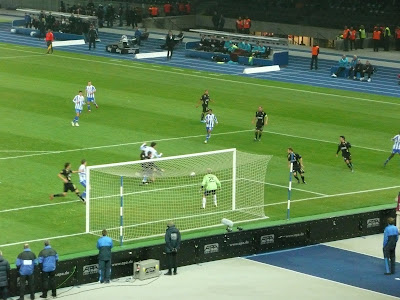 After more than 30 minutes of subpar football, in which Hertha might have had a bit more of the bal, but the only semi-chances came from Heerenveen, the only great play of the game happened. And intelligently executed attack over 4-5 different players was beautifully finished by Losada: 0-1 for Heerenveen. The people around us now became even more boisterous, whistling their own team and complaining loudly about the players and coach.


After scoring a couple of cooked sausages, together with the happy Frisians (the away fans), we got back to our seats. The second half was even worse, even though a Heerenveen player was sent off more than 15 minutes before the end. Despite being one man up, Hertha couldn’t even dominate, let alone create clear chances. 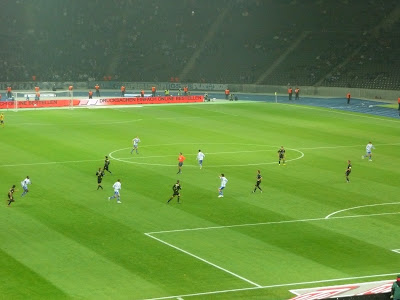 As my Spanish friend was freezing his ass off – ok, it was cold, but most locals were surviving fairly easily – the home fans could hardly muster the energy to complain and whistle. By the time the referee whistled for the last time, only few still took the time to express their dissatisfaction. Most simply went home, like us. 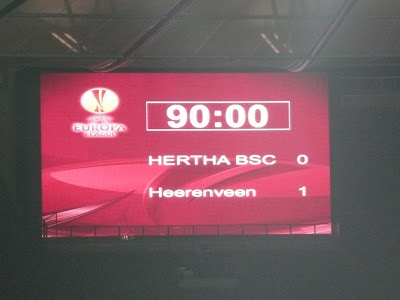 Although the Olympiastadion is certainly worth a visit, Hertha BSC is a soulless club with a non-distinct fan base. I am happy to be able to scratch them off my list, and look forward to seeing the other teams in Berlin.
Posted by Grondhopper at 3:22 PM No comments: