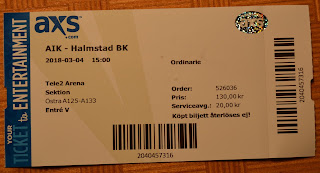 Initially I had not expected to see a game during my visit to Stockholm, as the leagues only start in April, but when I heard that the Svenska Cupen (Sweden Cup) started already much earlier, I changed my flight from Greece, and arrived a day earlier, so I could see a game in Group B, between Allsvenskan (First Division) team Allmänna idrottsklubben (The Public Sports Club, AIK) and Superettan (Second Division) team Halmstad Bollklubb (HBK). 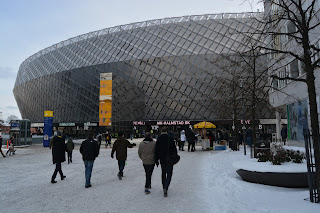 The game is played at the Tele2 Arena, which is home to two of AIK’s in-town rivals, Hammarsby IF and Djurgårdens IF, whereas AIK normally plays at the Friends Arena in the north of town. Tele2 Arena opened only in 2013 and can hold 33.000 people for sports games. I buy a ticket for the seating stand for SEK 150 ($18) – even at the stadium the ticketing is done by a special company, which charges SEK 20 ($2.50) for the “service” of printing the ticket. 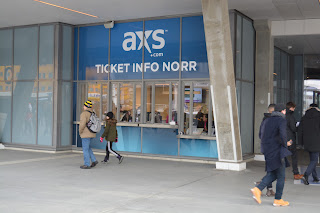 In a truly egalitarian fashion, your ticket doesn’t have a specific seat number, so you can sit wherever. Hence, everyone clutters around the middle of the pitch, but as there are only some 3.000 people, I guestimate, this is not a problem. The audience is white, seemingly middle class, and remarkably male (I guestimate only some 15% is female). About half wear some type of AIK merchandise, although primarily scarves – it is freezing outside, so that makes sense. Some 20 away fans have made the 500 km journey from Halmstad in the Southwest. 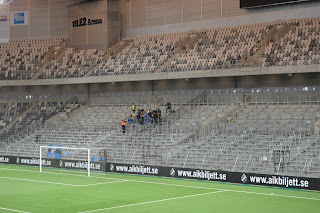 Tele2 Arena feels more like a cinema than a football stadium. First of all, it is fully covered, i.e. indoor, which is also reason why the game can be played – even much of the city bay is frozen and there is snow everywhere. Second, they play on AstroTurf. And, third, you sit on cushy chairs and have free Wifi. No wonder most fans behave like a cinema audience, i.e. they are quiet. The only exception is before kick-off, when everyone sings the club song. 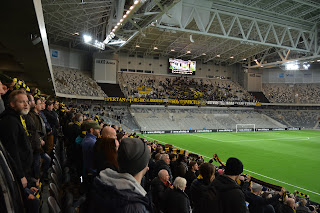 In the fourth minute AIK attacks from the right, the cross comes to a striker who makes great gestures to indicate he is going to volley it (that will never happen), but then goes easily down after some weak pulling. The referee gives a penalty, which is easily converted: 1-0.

One would think that this makes HBK attack a bit more, but they at times defend AIK’s 1-0 lead even more than AIK itself. The hosts pass the ball around slowly, while both sides hold as many people behind the ball as possible. As passing is slow, they play on AstroTurf, and there are huge spaces, control can be subpar and they still don’t loose much of the ball. 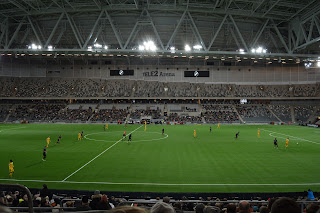 In the 20th minute AIK has a good attack, but the shot is weak. Five minutes later AIK has a good through ball, but the striker reacts too slowly, which allows the defender to get his foot in. Another five minutes later the hosts have a good counter, a doublepass puts the striker alone in front of the goalie, but he shots it straight at him. A minute later HBK has its first ball on goal, a very weak header. Overall it is very quiet in the stadium. Only the “Ultras Nord” are singing. 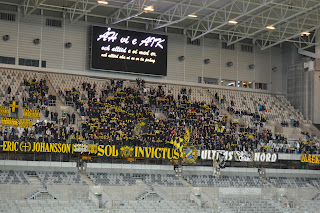 The passing is predictable and the game boring. There are a few half chances, including an AIK shot from 20 meter, straight at goalie, and a surprise HBK cross, which is just missed by the striker. Half-time score is 1-0. 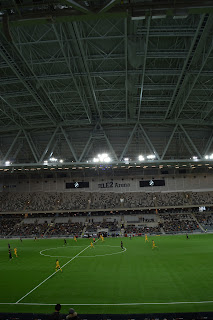 After googleing Halmstad BK – free Wifi after all – and finding out they are from a lower division, it all makes more sense. However, they slowly start to make more of the game. In the 56th minute (!) they force the AIK goalie to make his first safe – albeit a fairly easy one – and four minutes later they get a penalty, after the striker is fouled in the box. It is taken beautifully and HBK is level: 1-1.

By this time I have solidly started to support HBK and celebrate the equalizer among the shocked home fans. But just eight minutes later they can celebrate again, as AIK scores out of an insanely easy counter-attack. The home fans are so relieved they break out in the first, and only, spontaneous singing of the afternoon. 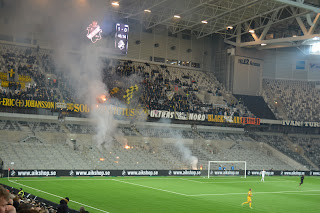 This time HBK responds directly. They have several decent attacks, but fail to provide any decent finishes. AIK seems to have moved on and no longer is interested in playing. As everyone is counting the seconds to the end, AIK starts to play again. In fact, they play more in the last 5 minutes of the game than in the first 85. In the 88th minute they score from a very calm and well-executed counter: 3-1. That is also the final score. 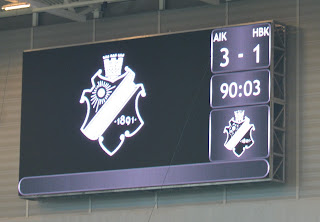 I understand, it is cold in Sweden, but really, do you have to play in a cinema-like setting? Let’s face it, you Swedes aren’t the most exuberant people to begin with, so how can this finish anyway else than boringly? Anyway, should you be in Stockholm, do go and see AIK play, in their own Friends Arena, but do it while there is snow and ice outside, so that you at least have an excuse to be watching indoor soccer.
Posted by Grondhopper at 12:16 PM 1 comment: