THE GROUNDHOP YEAR 2007
On this last day of the year, it is time to make a short overview of the year 2007 in terms of my groundhops. Let me start with the obvious: 2007 has been a great year for groundhopping. Despite the fact that I decided to have fewer longer and more tiring groundhops, i.e. groundhop-weekends of 2000+ km, I visited 37 games in 11 countries.

As I had already visited 5 of these teams and 10 of these countries before, this means 32 new teams and 1 new country/league (Northern Ireland), bringing the grand total at the end of 2007 at 288 teams in 36 countries.

The best groundhop of the year was without a doubt Frem-HIK, a game in the Danish 1. Division (Second Division). The weather was gorgeous, I was with my girlfriend, and the atmosphere was so relaxed. A dream! Moreover, Frem had some of the greatest fanwear I have seen anywhere.

The most impressive stadium was Arsenal’s new Emeralds Stadium. Although all these ultramodern new stadiums are not really my thing, if you are going to do it, do it like them! (Moreover, getting the right result for PSV made me enjoy it even more ;-).

The biggest disappointment was probably IFK Göteborg, a big name from the past which had been on my “to see” list for years. The stadium itself was empty of people and atmosphere.

The worst club was, without a shadow of a doubt, FC Omniworld, from Almere, the Netherlands. Truly everything about the club is wrong! The logo, the name, the outfit, the stadium…

Finally, the worst ticket goes out to Trelleborgs FF. Giving your football fan simply the ticket from the register is simply not done! What’s wrong with all these (Scandinavian) teams anyway, not giving out tickets on the day of the game?!

In short, 2007 was a great year for Grondhopper. I want to thank all my fellow-hoppers for their great company, particularly J.B. who has done most of these hops with me, and all the readers for, well, reading the reports. Do drop by again in 2008 and feel free to leave feedback! Next year I’m going for club 300 and it will be a special one!
Posted by Grondhopper at 8:08 AM 2 comments: 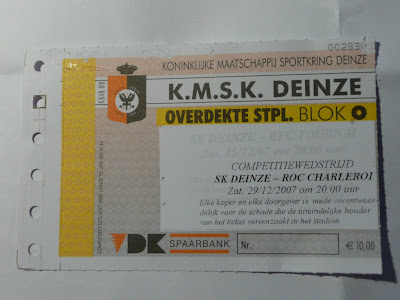 Just two days before the end of the year, JB and I decided to have our last groundhop of the year. Because of the problems in the Tweede Klasse (Second Division), with law suits and temporary suspension of games, there were some games played on the last Saturday of 2007. We decided to drive to Deinze, behind Ghent. Almost one hour before kick-off we parked our car directly in front of the Burgemeester Van De Wielestadion, and bought tickets for the covered standing section at 10 euro a piece. 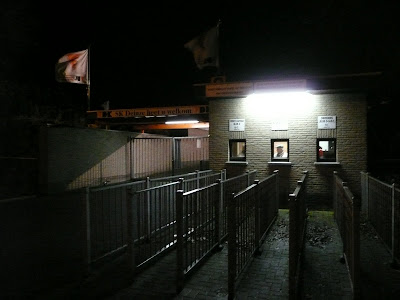 The canteen of the Koninklijke Maatschappij Sportkring Deinze (Royal Society Sports Circle Deinze) gave us warm shelter until kick-off. Laying just above the pitch, we could see the stadium filling up with some 500 people, 35 of whom from Charleroi, roughly 125 km to the south-east (and across the language border). (With some sense of exaggeration, the newspaper reported 1,198 people the next day.) 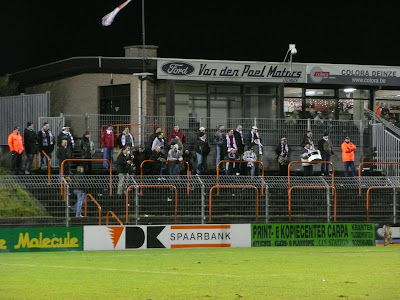 Both teams are in the second part of the league, with the R. Olympic Club de Charleroi-Marchienne, promoted last year from the Third Division, a couple of places below the hosts.

The Burgemeester Van De Wielestadion doesn’t look like much if you take the different stands separately, but all together creates quite a nice atmosphere. On one of the long sides is a small standing section, on the other a modern but small seating section (including VIP sections and secretariat). Behind one goal is no stand, although you can stand on the grassy hill itself, and on the other is a small uncovered standing section, which is partly for the away supporters, and the canteen. Officially, the total capacity is 8.000, including 790 covered seating, 1300 covered standing, and the rest uncovered standing. 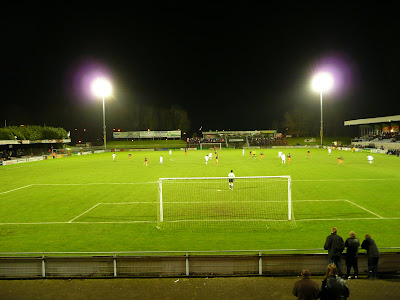 The game was much what one could expect of two weaker teams in the Belgian Second Division: slow, defensive, many bad passes and controls. In the 4th minute the hosts had their first shot at goal. Although Deinze was a bit stronger, it would be Charleroi that had the best chances, including a strong counter-attack in the 23rd minute. Still, after an unsuccessful attempt two minutes earlier, Deinze scored 1-0 through a great free kick from roughly 20 meters. Charleroi would have a chance to equalize, during a minute-long scrimmage in front of the Deinze goal, but failed. Thus, 1-0 was also the half time score. 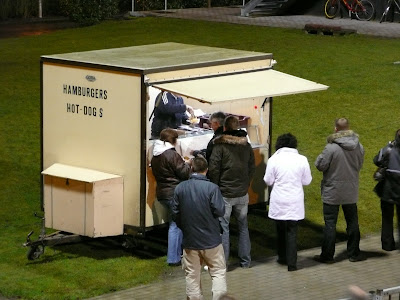 During the half time I tested the snacks cart: the sausage was remarkably meaty, for a Belgian sports snack, but couldn’t compete with Thierry’s sausage in Hamoir. After that we took shelter for the cold in the other canteen, where we found some other away fans (which probably brings the total number at around 50). We then walked back to the covered standing section, where we took our place close to the ca. 20 ‘hardcore’ home supporters; the only ones singing in the stadium. 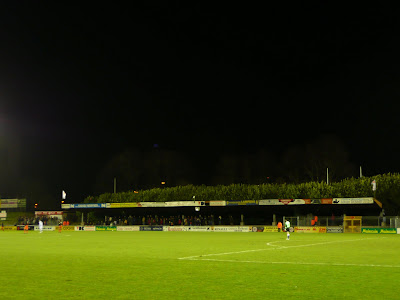 The second half was even poorer than the first. Deinze seemed unwilling to dictate the game, which gave moe space for Charleroi, which was largely unable. Because the visitors were attacking, the hosts would get more space for counters, which created some exciting moments in front of the goal. Unfortunately, however, the passing and positioning was very poor and few real chances were created. 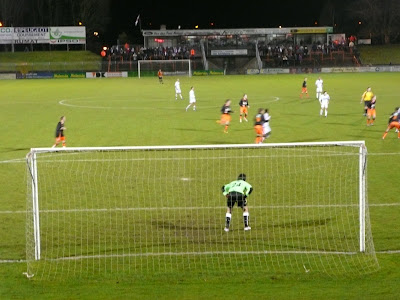 Both teams had some three decent chances, of which Charleroi had the better ones, including a well played out combination with a horrible finish high over the goal in the 86th minute. But at that time most people in the stadium already knew that 1-0 would be the final score. Not because Deinze was so solid in defense, but because Charleroi never gave the impression that they were able to score. 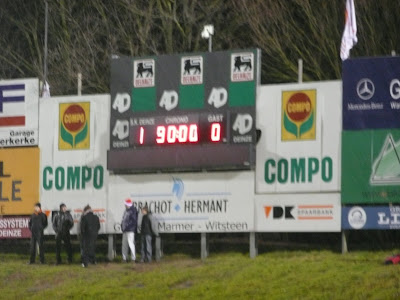 Sympathetic to the cold supporters, who also had to face some snowy rain, the referee hardly counted any extra time and we were extra happy that our car was parked in front of the stadium. It surely was real winter-hop: cold, dark, and rough football. However, I could imagine the Burgemeester Van de Wielestadion to be quite a nice place in the summer. I’m not sure there will be more people, or atmosphere, however.
Posted by Grondhopper at 3:38 AM No comments: 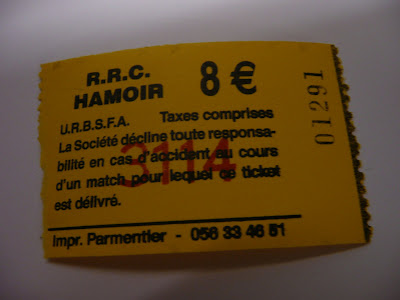 Slightly jetlagged I met J.B. at our usual place to head out to the tiny town of Hamoir (population 3.500) in the Liège province of Belgium. At the program was a game in the Derde Klasse A (Third Division A) between the proud league leader, from Flanders, KV Turnhout, and mid-table RRC Hamoir. After a two hour trip, in part the consequence of my jetlag (which made me an even worse map reader than usual), we parked our car next to the stadium. 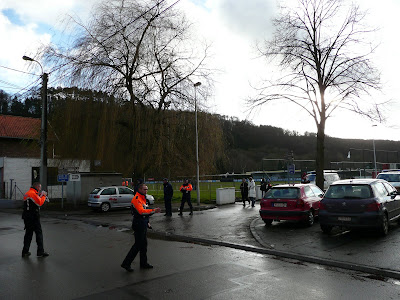 Now, when I say stadium, I don’t really mean stadium. As far as I can google, the stadium doesn’t even have a name. The ground can hold only 1.500, while the tiny stand might hold 300 (if you really squeeze tightly together). Not that surprising, as RRC Hamoir entered the Fourth Division only in 2005, and was promoted to the Third Division A last season. 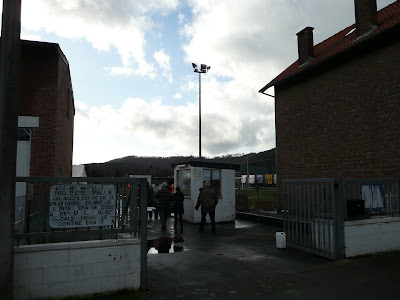 We bought tickets for 8 euro each and, the loyal reader will not be surprised, descended upon the snack booth. Now, I am not a fan of Belgian sausages, but this dude, by the name of Thierry, surprised me with a 10” thin sausage on a baguette with onions and samourai sauce. Divine! And that for only 3 euro. Worth the trip already! 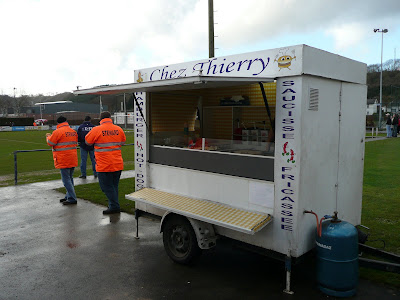 JB had told me that it had been raining for days and we had actually been afraid that the game would be canceled because of a we pitch. However, in the morning I had checked teletext and saw that indeed most games had been canceled in Belgium, but not for the national leagues. However, that the pitch was muddy and heavy was clear from the Hamoir goalie, who looked like a happy piglet during the warming-up before the game. 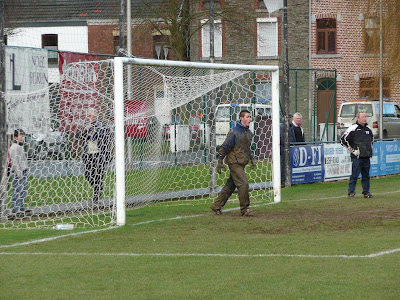 In the canteen we heard more Flemish than French. It seems KV Turnhout has seriously increased its traveling support since they have made it to the top of the league. Of the roughly 300-500 people at the game, at least half of them had made the 150 km trip from Turnhout in the north of Flanders and they were as vocal as the home crowd. The tiny stand housed some 200 supporters, roughly 100 away supporters on one side and 100 home fans on the other. We were among the Walloons and thoroughly enjoyed their humor and happiness.

Games between Dutch- and French-speaking teams in Belgium always bring something extra, but in these chaotic times – that day Belgium was without a government for already six months as a consequence of conflicts between Dutch- and French-speakers – politics is everywhere, also on the stands. At various times there was some friendly chanting back and forth, such as “Flanders is coming” by the visitors, followed by “anti-Vlaams Blok” by the hosts. 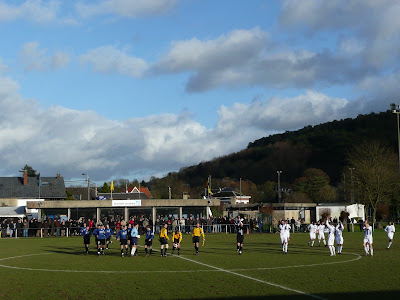 From kick-off the game was entertaining, even if both teams played with many people behind the ball and at a fairly low pace. By far the best player on the pitch was the number 10 of KV Turnhout, Ben Van den Brandt, a young midfielder with (unfortunately) a bit of a lousy attitude. Overall the visitors were the better side, though creating few clear chances and depending quite heavily on Van den Brandt’s creativity. In the 40th minute a Hamoir defender stupidly fouled the poor Turnhout striker. The following free kick was well finished by the visitors, although the goal scorer was aided by terrible defending. 0-1 was also the half time score. Even before the supporters had settled in for an exciting second half, the game seemed over. In the 48th minute Turnhout played a beautiful high lob over the Hamoir defense, which was coolly executed: 0-2. However, supported by their continuously happy and singing fans, Hamoir equalized two minutes later: a low free-kick disappeared into the goal without anyone noticing: 1-2 and the game was back on! 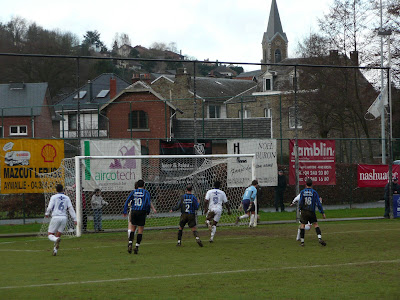 The game would now go back and forth, at times livened up by bizarre moments. For example, at one time the referee accidentally hit a player in the face, while at another time the goalie walks out of the penalty area with the ball in his hands, thinking he is awarded a free-kick there, but instead getting a free-kick for hand ball against him. But the game also had some real chances, including a disallowed goal for Turnhout (hands). 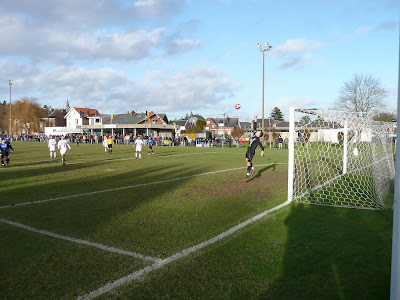 In the 65th minute Turnhout finally closed shop. Its striker, Ben M Bemba, who until than had been extremely poor and had only excelled in being offside, received a pass in the penalty box, controlled well, turned around beautifully, and put the ball dry and cool in the goal: 1-3. This didn’t seem to matter to most of the home supporters, who kept laughing, drinking, singing, and making fun of the Flamands.
[ No scoreboad, no final score ]
Enjoying the warmth of J.B’s car, we were in full agreement: this was one of the nicest groundhops we had made. An absolutely tiny stadium in a small village, but what enthusiasm and happiness. RRC Hamoir, definitely a big team in a tiny setting!
Posted by Grondhopper at 2:19 PM No comments: