After having watched the Dutch loose the WC final, for the third time in their history, I made my way to the Olympia Stadium in Baton Rouge, Louisiana, for my fourth and last game of this Deep South Groundhop. I arrived well in time and bought a ticket for $10 at the ticket office. 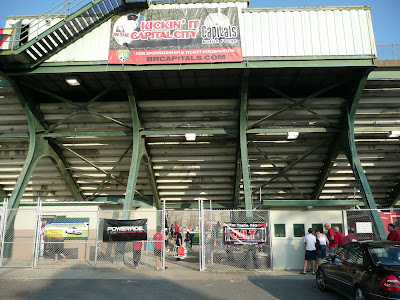 The Olympia Stadium is an old concrete stadium in a public park with probably the worst pitch I have ever seen in a professional setting. Not only was it full of sandy spots, it was actually bended! Incredible! 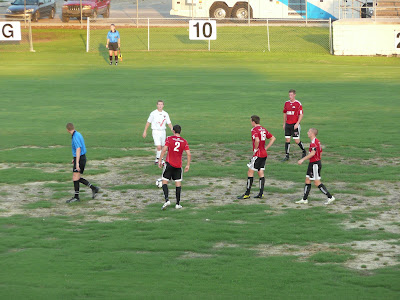 Some 100 people had turned up on this warm and humid evening, which was only bearable because of the nice breeze. More fans wore jerseys of Spain than of the Baton Rouge Capitols. As always, there were a lot of kids, most of them losing interest in the game after half an hour. 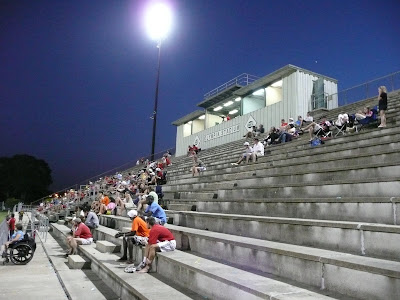 In the first minute the Capitols saw an easy shot being wrestled out of the goal, which led to a free header wide. Unfortunately, this was not the beginning of a great exciting game. In fact, the game was very slow and very poor. The Blackhawks in particular, were problematic, often more confused about each other than about their opponent. Fortunately, I was entertained by three vuvuzelas and one guy who shouted all game long.

Halfway the first half the Capitols started to dominate, without really stepping on the gas, helped by an often blundering opponent. In the 29th minute this led to the first goal, after a good through pass was coldly finished: 1-0. After a brave safe of the goalie had kept the lead, a long pass and a beautiful lob over the goalie made it 2-0 in the 36th minute. Just before half time a good attack by the left-wing defender found the feet of striker Joe Tait, who scored his third: a clean hattrick. 3-0 was also the half time score. 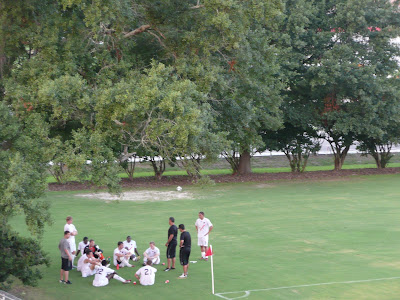 At half time the visitors hided from the sun under a tree, while the hosts hung around at their bench. Even when I was 7, we would go to our locker room and get tea. Anyway, the second half started where the first had left off. In the 50th minute a food attack was finished coldly: 4-0. 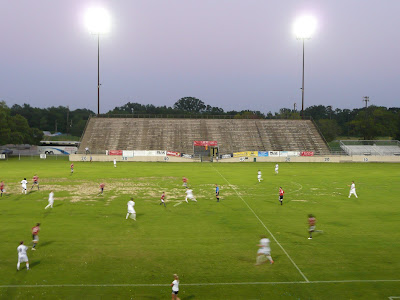 In the remaining minutes the various attacks of the Capitols were interrupted only once, by a long solo attack of the Blackhawks striker, who managed to score the so-called consolation goal: 4-1. In the 81st minute a clear foul led to a red card for the Blackhawks and a penalty for the Capitols: 5-1, also the final score. 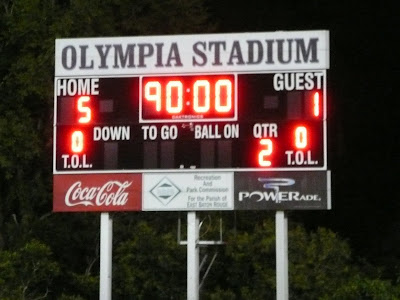 The Baton Rouge Capitols have a very decent squad for the PDL, based on some experienced British players and coaches and some talented young American college players. However, their facilities are below par and their fan base seems suspect. I do hope they will be able to establish their franchise more firmly.

Still warm and sweaty I drove off. Four games and 20 goals, not bad. Moreover, I had seen some quite entertaining football, unfortunately not in the MLS. Some 24 hours later I would be back home… thinking about my next games.
Posted by Grondhopper at 9:21 PM