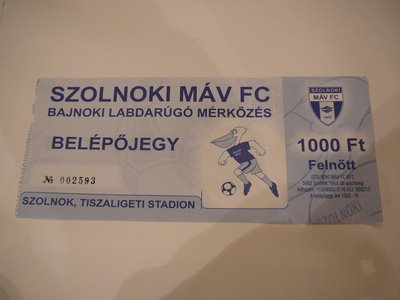 I was spending two weeks in Budapest this summer, which means not just a visit to the fantastic Sziget Festival, but also the opportunity to groundhop. As I have already visited most major teams in Budapest, I tend to venture outside of the capital and increasingly into the second division. But this game was going to be a special one, as it involved the first away game in the second division of Ferencvaros, the powerhouse in Hungarian footbal that was relegated last season because of financial scandals.

Around noon I boarded a train at Keleti station, slightly surprised that there were no FTC supporters in sight. Destination was Szolnok, a town some 100 km east of Budapest, which took roughly 80 minutes by train. When I arrived in Szolnok, I was greeted by a massive police force, by Hungarian standards, particularly for the second division. Some 40 policemen were waiting in the tunnel of the railway station for the "Fradi" supporters, notorious in- and outside of the country for their hooliganism and racism. While I was 'enjoying' the communist surrounding of the railway station area, small groups of hooligans descended upon the station. They turned out to be (local?) FTC fans, who joined ever growing numbers coming out of the station. As it was some 33 degrees Celsius, and I was rather early, I decided to walk to the stadium, which is on the other side of the river. During the ca. 25 minute walk I was passed by various busses packed with Fradi supporters and guarded by police cars and motor cycles. Even in the town center there were mainly away supporters. 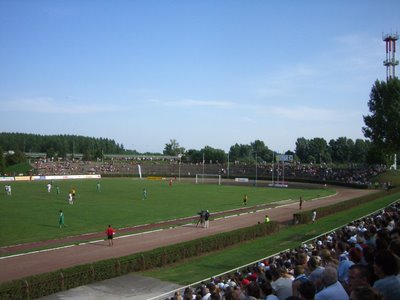 Outside the stadium I bought a ticket for the main stand for 1.000 Ft (less than 4 euro) and entered the ground. The Stadion Tiszaligeti is old and basic, like most stadiums used to be before professional football really took off. It houses 10.000, according to the official information, but normal attendance is probably around 500-1.000. Not today though, as Ferencvaros alone has brought some 2.500 supporters -- a phenomenal number, not just more than the home crowd (of max. 1.500), but more than most attendances in the first and second division. They filled the whole stand behind one of the goals, holding various banners (including one offensive anti-Slovak banner that caused quite some controversy) and sporting a whole range of different FTC tattoos.
The game started bad for the favorite, as Szolnok scored within 10 minutes. Many FTC supporters thought the goal was offside, which it was not, and were getting highly agitated. Some started to move towards the pitch, which led to reinforcements of the police and FTC security. They were saved by the referee, who gave a dodgy penalty to the visitors only one minute after the 1-0. The 1-1 calmed the Fradi hools down, and they were completely satisfied a couple of minutes later when they scored 1-2. That was also the half time score. Despite the heat it was almost impossible to get anything to drink -- only two small stands provided some drinks and food (well, sun flower pits). After half time, with the standard 'cheerleaders' of 14-15 years old who are neither hot nor talented -- the game started slow, with Szolnok having some good plays, but FTC scoring the goals. At 1-4 the referee decided to give Szolnok its dodgy penalty, after which FTC scored the final goal of the game: 2-5.

Walking back to the station various honking cars and busses with shouting Fradi fans passed by again, while the Szolnok fans seemed invisible in their own town. In and around the station fans were drinking and police were keeping an eye on them. There wasn't any violence, although you could see the potential. All in all the train ride back was relaxed, which might also have been because I took the more expensive Inter City.

Sure, the level of play wasn't too high. Szolnok is a mediocre team in the Hungarian second division and Ferencvaros wouldn't do too well in the first division. But seeing Ferencvaros play in the second division is an opportunity you don't get too often. Thus, a historic groundhop. :-)
Posted by Grondhopper at 3:51 PM No comments: