At the end of a great groundhopweekend with my brother I make one last hop (by myself) to Meppen, a small town just across the Dutch border in Northwest Germany. The local pride, SV Meppen, dates back to 1912 and spent a total of 12 years in the 2. Bundesliga (Second Division). In 1998 they relegated and a decade later they relegated again. Today they play in the Regionalliga Nord (Fourth Division North). 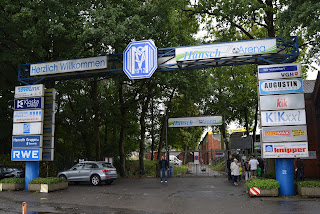 I arrive at the bit grandiosely named Hänsch-Arena – Hänsch Stadium would be much more accurate and adequate – and ca easily park in front of the cute stadium. As I buy my ticket for the (covered) Old Stand, for €10, I notice that I am one hour early. Kick-off is at 15.00, not 14.00. 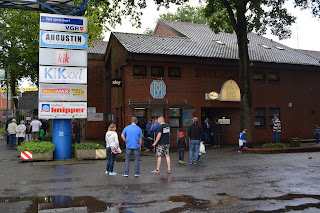 Hänsch-Arena is a nice old stadium with two main covered stands on the long sides and two uncovered standing-only stands behind the goals. It also has a small fan shop and a cute stadium bar with full bar. Obviously, there are also several snack options involving sausages and even fries. 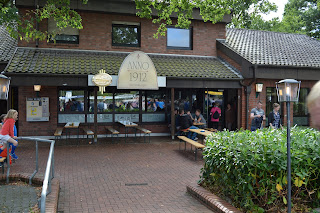 On this fifth round of the 2016-7 season there are (officially) 2.213 spectators, a pretty large number, which was undoubtedly because SV Meppen had won its first four games of the new season. The fans are local, typical of a small provincial town (white, middle class, predominantly male). There were also some 50 away supporters, not bad for a U-23 team. 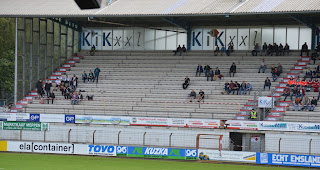 After an uneventful start, the visitors make a dumb foul in the 5th minute, and SV Meppen gets a penalty. Although the goalie gets a hand to it, the ball goes in: 1-0. Just two minutes later the hosts have quick attack, the striker goes around the goalkeeper and scores: 2-0. What a start! 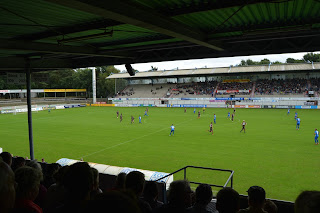 The hosts are enjoying their quick, and surprisingly comfortably lead, and get some corner kicks, while St. Pauli II creates a few half chances. In the 14th minute the visitors have a good attack, lone striker going alone at the goalkeeper, in between defenders, but shoots just wide. Ten minutes later another good St Pauli attack, but shoots hard at goalie. 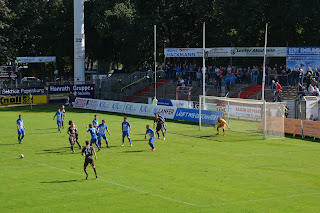 After half an hour Meppen shoots from 25 meter at goal; the shot is low but stopped by the goalie. Ten minutes later a long Meppen solo from the left moves into the middle and then shoot just over. Half time score: 2-0. 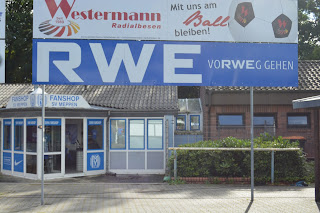 St. Pauli dominates the first 15 min of the second half, though they create few real chances. In the 63rd minute a fast cross misses everyone in front of the goal, although a Pauli striker almost gets a foot against it.

By now the pace has dropped significantly. There are fewer chances but still the ball goes from side to side. The visitors are a bit better but not very effective in the end phase. 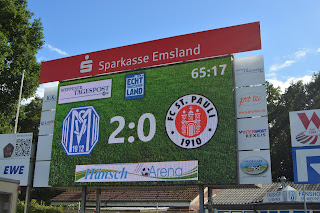 Unfortunately, I have to leave in the 75th minute, as I have to make an evening flight in Amsterdam. I later find out that SV Meppen win the game 3-1, the fifth consecutive win of the season. 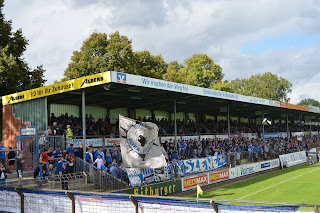 SV Meppen is a nice small town club with a lot of tradition and loyal fans. A team that deserves to be in the 3. Bundesliga, which will undoubtedly be the case next season.
Posted by Grondhopper at 7:05 PM No comments:

We actually made good time from Paris to La Louvière and have enough time to eat at the fantastic friterie Cook ‘n Frites. However, we enjoy the fries a bit too long and in the end arrive a bit late at the stadium…. Moreover, at the wrong stadium! After some crisis management we finally get to the right stadium some 15 minutes late. 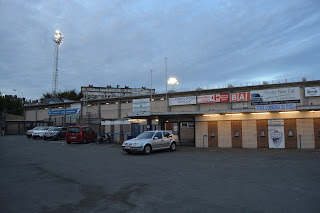 UR La Louvière Centre (URLC) was known as Union Royale Sportive du Centre or URS Centre until 2011, when it changed its name, in part because “big brother” R.A.A. Louviéroise (RAAL) had gone bankrupt in 2009 and URS Centre could now become the big club of the town. It also moved to the Stade du Tivoli, the communal stadium of 13,500 that had been RAAL’s home ground. Since the fundamental restructuring of the Belgian football leagues URLC plays in the newly created Division 2 Amateurs (Second Division Amateurs), which is the fifth or sixth division in Belgium (it was impossible for me to exactly track the new system). Today is the season opener, which is quite late, as the top flights in most countries have already played multiple rounds. 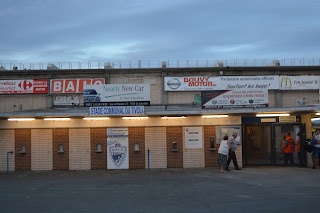 We get tickets for €10 each and get into the stadium, where we first have to have a whole discussion to get my camera bag into the ground. When we finally sit down 20 minutes have been played but it is still 0-0 (not necessarily a good sign). 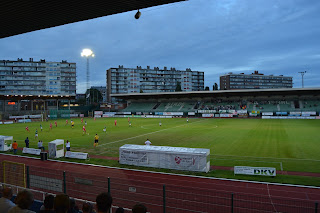 There are ca. 500 people, virtually all white, mostly men, and many very old (well beyond 65). On the opposite side of the main stand are the “ultras”, namely the Green Boys and the Wolf Side, both roughly 25 men, who sing for much of the game. 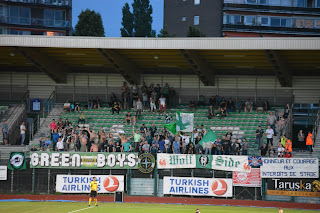 We can’t really find any supporters of Royal Stade Waremmien Football Club (or RSWFC), a team from a town that has barely more people than fit in the stadium, which is just an hour from La Louvière (ca. 100 km). 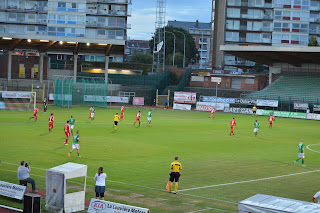 In the 22nd minute a LL striker oes alone at the goalie, no one with him, but the shot is saved. Three minutes later the guests have a similar chance, but the shot hits the knee of the goalie, before it is saved from the line by a defender. Ten minutes later RSWFC again has a chance, but this time the goalie saves spectacularly with his right hand and then deflects the rebound from just 2 meter. Great saves! 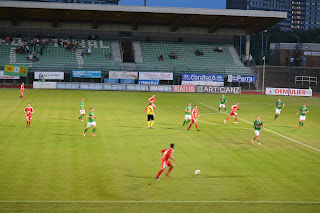 In the 35th minute the hosts counter with two on the left and one in the center. One of the two shoots, the goalie saves, the other puts the rebound in front of the goal, where the third one finishes easily: 1-0. Maximal production! 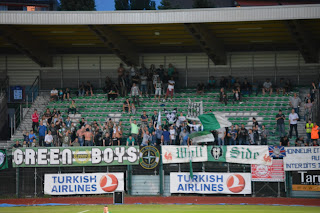 The reason that there are few chances has to do with the typical Belgian approach to football, where the majority of players are always kept behind the ball. Both teams hold 6-7 players at all time behind the ball, even when they “attack.” Hence, 1-0 was also the half time score. 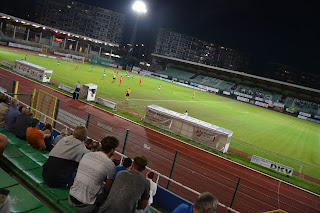 The second half started as slow as the first half had ended until in the 50th minute LL shoots from 30 meter, straight at the goalkeeper, who completely misses the bounce just in front of him, and it goes in: 2-0. One of the most unbelievable mistakes I have ever seen in a game. 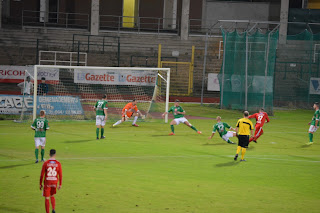 The guests take it hard, whereas the hosts become a different team. In the 55th minute they get a free kick at about 20 meter, which is shot hard around the wall and inside the far corner. A good kick but the goalie should have had it. 3-0 nevertheless. 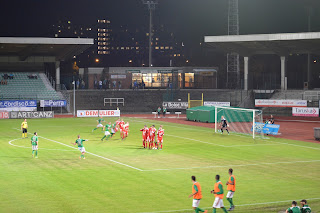 In the 63rd minute the guests finally get a chance to do something back. A dumb foul in the box leads to a penalty but the excellent goalie stops it – and the penalty kick was actually quite good. The guests try it a few more times with some attacks but can’t score. In the 76th minute the hosts punish them for it. After a corner kick three players are free in front of the goal, one heads it in: 4-0. 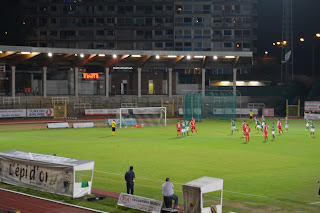 This is also the final score. An amazing start to the season which also took the fans by surprise. 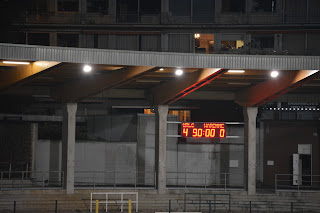 Despite the relatively poor quality, which can be expected at this level, URLC is a nice club to visit. It has a small but very loyal support, who must relish in the fact that they are finally the top team in town.
Posted by Grondhopper at 6:46 PM No comments: