In early July I decided to take a groundhop trip to the Deep South. It turned out to be a 2600 miles (4185 km) trip of 6 days in which I would see 4 games: 3 PDL games and 1 MLS game. The general conclusion can only be that ‘soccer’ lives in the south. 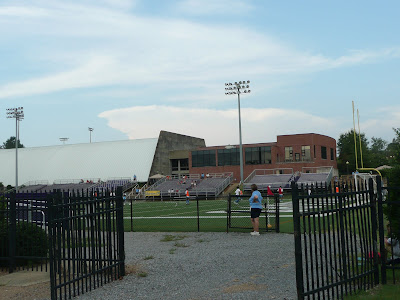 My first stop was Jackson, Mississippi, 660 miles (1060 km) from Indianapolis, and home to the Mississippi Brilla. They play at the Harper Davis Field, the football field of the local university, Millsaps College. I paid $8 at the ticket office/table, which gave me access to both main stands. 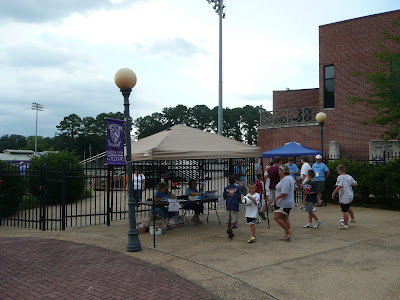 The Brilla plays in the Southeast Division of the Southern Conference of the Premier Development League, just as the other PDL teams I would watch in the next days. It is no ordinary team though. As Wikipedia writes: “The team is associated with the Brilla Soccer Ministries organization, which undertakes sports ministry to share the message of Christianity through the environment of soccer. The club’s name is derived from the Spanish word for “shine”, and references the biblical passage Matthew 5:16 which says “Therefore, let your light so shine before men that they may see your good works and glorify your Father who is in heaven.” Hence, the game was preceded not only by the national anthem, but also by a prayer. 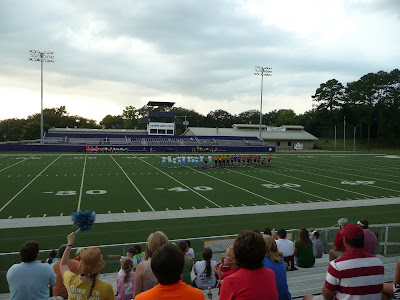 The atmosphere at the game was relaxed. Before the game small kids were playing on the pitch. It was rather hot and humid, but I guess they are used to that in the Deep South. I guestimate that there were some 250-300 people at the game; the official website reports 732, which seems highly inflated. Virtually all people were white (in a largely black city), mostly kids, virtually no one wearing Brilla merchandise. Hence, the empty fan shop. 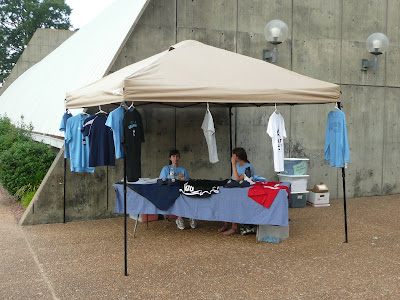 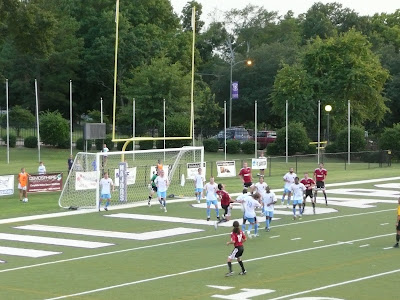 Two minutes later the hosts even take the lead, after a corner kick and a strong header: 2-1. While most of the game consists of quite good passing in the middle part of the pitch, every now and again there are chances on both sides. There is also a lot of shouting and complaining to the referee, not that common in the US (where the referee is always addressed as “Sir”), as well as some horrible fouls (often because the player simply is too late). Just before half time a, what we call in the Netherlands, “Sunday shot” from 20 meters lands in the far corner: 3-1. In extra time the Capitols press for a corner, which leads to a half-volley, saved by the goalie, who cannot prevent the rebound from going in: 3-2. This is also the half time score.
After the half-time shoot out with the Little Cesar mascot, the second half starts at a lower pace. As often with a high score first half, the second half is slow and without many big chances. In the 57-59th minute period the Brilla have three chances, however, the last one goes in on the rebound: 4-2. Moreover, the next minute one of the Capitols players is sent off because of elbowing, after some useless show boating. Game over… or is it? 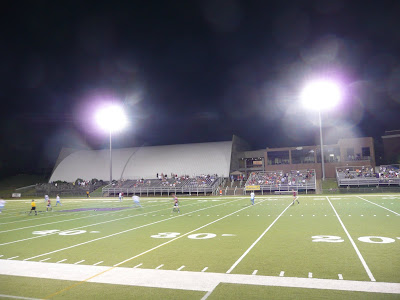 As Brilla sit back with a comfortable 4-2 lead and one man more on the pitch, the Capitols find a second wind and pressure for a goal. The game looks 11-11, even if the increasingly frustrated Capitols pick up several yellow cards. Also, the quality of passing is very high for the PDL, in part helped by the smooth Astroturf pitch. In the 80th minute the pressure pays off through a freak goal: a shot from 20 meters is deflected and then the goalie blunders: 4-3. As the Capitols pressure for the equalizer, Brilla get a great chance on the break, but fail in the finishing. In the dying seconds of the game Brilla survive a scrimmage in front of the goal and secure their victory over their direct competitor for the Division championship. 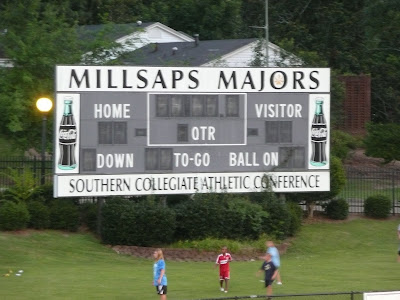 Overall, I saw an exciting game of quite high quality. Of all the PDL games I have seen so far, this was definitely one with the highest quality passing. However, tactically both teams were quite poor, which explains the many goals. I also saw two of the best PDL players so far: the left-wing back of Brilla, Mike Azera (#2), and the central midfield, Ahmad Ihmeidan (#15) – seemingly a Muslim, which would be remarkable given Brilla’s overtly Christian character.
Posted by Grondhopper at 6:53 PM