The last game of the weekend is in Luxembourg, a standard location for our brotherly groundhops. This time we go to RC Hamm Benfica, one of a few team in the country named after a famous Portuguese club, a consequence of the enormous Portuguese community in Luxembourg (16 percent of the population!). 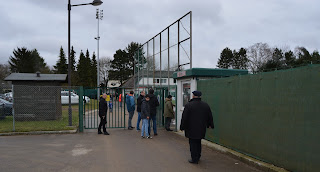 The “stadium” is just outside of the city center of Luxembourg, tucked away on a hill. Rapid Mansfeldia Hamm Benfica was founded in 2004 as a fusion of two small clubs, which initially played in the second division. In 2007 they got promoted to the National Division (First Division) and they have been in the top flight of Luxembourg football ever since. 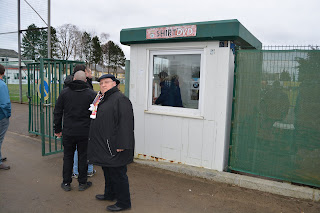 We pay €10 for a General Admission ticket. The ticket itself is generic and dates to the 2015/16 season. That gives you an indication of the level of professionalism. RC Hamm Benfica plays at a ground, simply named Luxembourg-Cents, after the district, which allegedly can hold 2,800 people. It is the smallest ground in this league I have ever visited. It has one stand, which has only 3 rows. 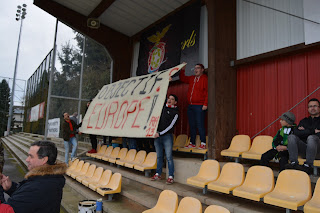 There are roughly 120 people, mostly men, and some 30-50 are Portuguese speakers. One small group of 10 younger men have a banner and sing during the game. There are also some 25 away supporters, who only had to travel 30 km. They also sing and even have a drum. 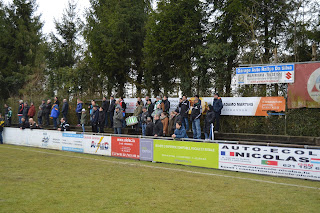 Benfica has the first decent chance, in the fifth minute. In the next fifteen they have the best of the game, but create few chances. The play is roughly as bad as the pitch: really bad! 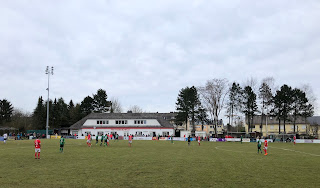 In the 38th minute the hosts have another chance, but the rebound from 16 meters goes 5 meters over the goal. While the game goes back and forth, the control and passing is bad, and the ball rarely gets into the box. 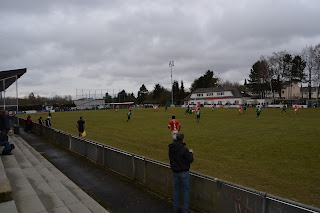 In the 41st minute the visitors finally have a good attack, with a deep cross, but the header is too late. The inevitable half-time score is 0-0. 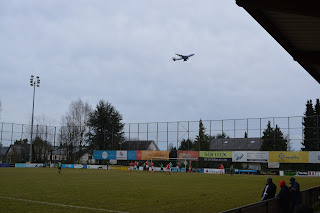 In the 49th minute Benfica has a good attack: a hard shot leads to a good safe by the goalie. Three minutes later the hosts have another attack, which is stopped by a foul, and leads to a counter by the visitors, which ends with a hard shot over the goal. A bit later Monsdorf has another set of chances, mostly because the goalie screws up, and the defense is terrible. 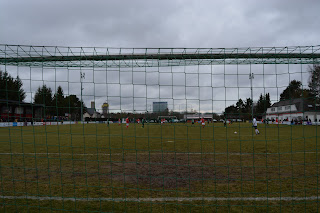 The play is getting really bad. Both teams only master 2-3 passes before the lose the ball. Consequently, the only notable occasions are free kicks, which occur regularly. In the 79th minute a free kick is put into the box and headed in goal: 1-0. Nope, the player had pushed, so the goal is disallowed. 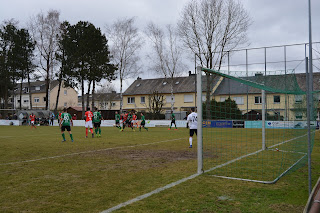 In the last ten minutes both teams still squander a half-chance, but in the end, the inevitable happens: 0-0. Both teams could have played for 90 minutes more and still wouldn’t have scored! According to my brother, this was the first time in over two decades that we saw a goalless draw together. In the end, RM Hamm Benfica has the atmosphere of a third or even fourth division team in Austria or Belgium. Even by Luxembourgish standards it is really small. The main attraction is the exotic name.
Posted by Grondhopper at 6:24 PM