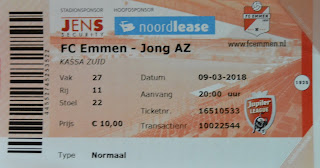 As part of our annual groundhop-weekend, my brother and I start out in the Northeast of The Netherlands, at the one (more or less) traditional professional football country I still had to see in my native country: FC Emmen. It only joined the professional league in 1985, as simply Emmen, and changed names in 2005, after splitting its amateur and professional branches.