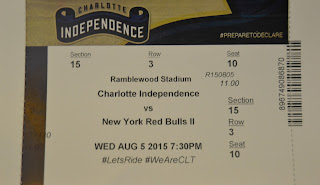 Soccer is not a very popular sport in the Southeast, with the exception perhaps of the state of Florida, but the bigger cities are trying to develop new franchises that should, one day soon, compete in the top division of US soccer, the MLS. This is the goal of the Charlotte Independence, founded in 2014, which took over the USL Pro (Second Division) franchise of the Charlotte Eagles, which moved to the amateur PDL. 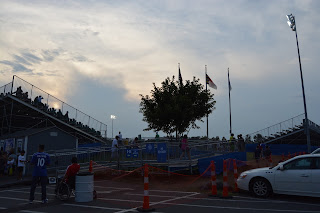 My friend C. and I arrive at the Ramblewood Soccer Complex about 15 minutes before kick-off. It is a generic US soccer complex with several pitches that are used mostly for pay-to-play teams of white middle class Americans. The game is going to be played in a makeshift ‘stadium’ of bleachers. Unbelievable for a Second Division team anywhere. We line up in front of the ‘ticket office’ and get tickets at a very decent $11 each, sitting behind the goal. 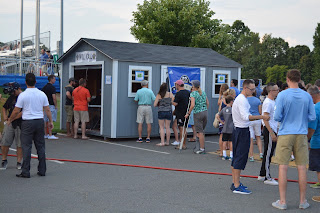 It is a sweltering late summer evening and there is a decent crowd. I guestimate some 1000 people, mostly young and white middle class, few with Charlotte Independence jerseys (despite the ‘fan shop’ – see below), many soccer moms and Hispanics. There are ca. 100 kids from amateur soccer team Charlotte United, who will later be celebrated on the pitch at half time. I can find no away fans, which isn’t surprising for the reserve team of an MLS club. 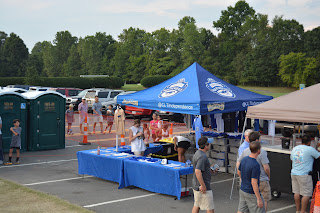 We took our lace on the bleachers and see a fairly furious start of the game. In the 3rd minute the visitors have a good shot, which is met by a safe of the Charlotte goalkeeper. Three minutes later a good shot from the edge of the box is placed in the corner and poor goalkeeping does the rest: 0-1 for New York.

The goal awakens the home team, which has 3 good chances in one minute, ending with a header that goes just wide. In the 20th minute good pressure of Charlotte leads to a shot from 16 meter that also goes just wide. Three minutes later a good chance of the visitors is headed away and the direct counter starts with a long pass, followed by a great run and a lob over the goalkeeper: 1-1. 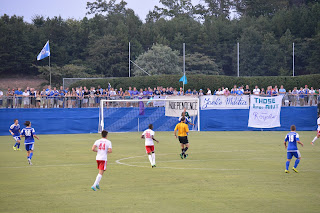 In the 25th minute a fast counter of New York, with no one in the way, leads to a shot across goal that goes just wide. Some ten minutes later the visitors totally miss a kick out and shoot the ball straight at a home striker, 10 meters out, who misses miserably. This is followed a couple minutes later by a good attack over right by the home side, which is finished weak and goes far wide. 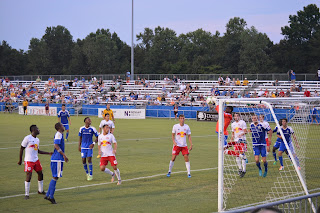 The pitch is really small, as the teams need only 2-3 passes to get from goal to goal. The pace is high, the control pretty good, but the defense is terrible. Half time score: 1-1. 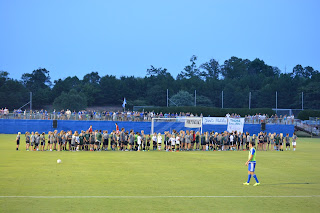 After having circled the pitch at half time, and eaten a bratwurst at a small makeshift stand next to the makeshift stands, I get back to my spot to see the second half start with a semi-serious attack of the hosts, which leads to a pass inside, behind the striker, but the winger strolls in and hits the goal from 10 meters out: 2-1. A surreal goal. 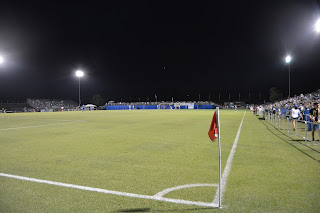 Around the 53rd minute the Charlotte goalie heads the ball out, a defender intercepts and shoots from just outside the mid circle on the goal post! How small is this pitch? Seven minutes later a New York attack leads to a collision in front of the goal and a corner kick. The game gets much slower now, as the heat and humidity are taking their toll. In the 71st minute a lazy attack by the visitors leads to a non-remarkable shot in far corner: 2-2. 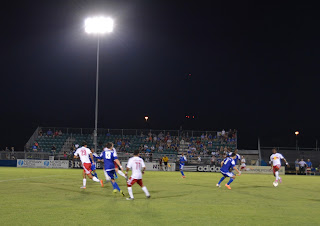 Not much happens after that. The pace gets slower and slower and the control poorer and poorer. The audience is starting to leave as the kids have to go to bed. Final score: 2-2. 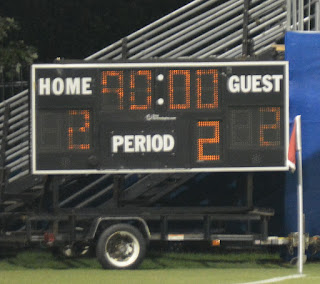 Charlotte Independence is a new team, so one shouldn’t judge it too harshly. But if this is the franchise that has to get Charlotte an MLS team, they will have to step it up in pretty much all ways possible. The ground is unprofessional, there is virtually no grassroots support, and the people that do come to the stadium are not very involved.
Posted by Grondhopper at 6:55 PM