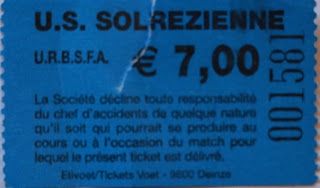 As most leagues had already ended, or played all games of the last round on the same date and time (mostly on Saturday), it was not easy to find a game on Sunday. I couldn’t make it to Club Brugge in time, I feared, so I settled for a couple divisions lower, namely a play-off game between the last from the Vierde Klasse (Fourth Division) and the first of the Eerste Provinciale (Fifth Division, regional). Winner was to stay in/be promoted to the Fourth Division, the lowest national division in Belgium. 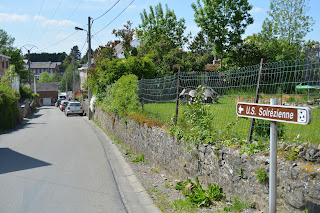 Union Sportive Solrézienne is a small club from Solre-sur-Sambre (which literally translates as Water-With-Mud), a village of just 2,500 people at the French border. The club’s facility is one of the most modest and run-down I have ever seen, much less developed than my very low-ranked amateur team in the Netherlands had thirty years ago. 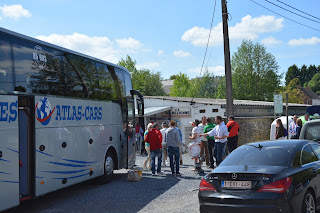 As I arrive to the ground, stadium would be too much, I am met by a bus full of drunk and loud away supporters, who brought a "Viva Espagna" drum and a couple of horns. They made the roughly 150 km (90 miles) trip from Visé, above Liege, where FC Richelle United is from. 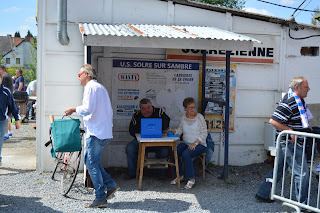 I pay €7 at the make-shift ticket stand, get a basic ticket (very common in lower division games in Belgium), and walk into the ground. I estimate that there are some 300-400 people, possibly half away fans. It is a very nice day, roughly 21C/70F and sunny. A relaxed atmosphere in this rural setting. There is a little stream on one long side of the pitch, a horse behind one goal, and a forest on the other long side. As far as I can see, there is no police present! 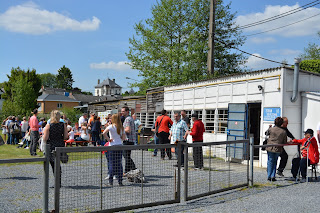 The game starts late, but no one seems to care. It seems like one of the referees is missing. With a delay of ca. 20 minutes the game finally kicks off, with blue playing against blue?! The pitch is very small and has several big sand parts. 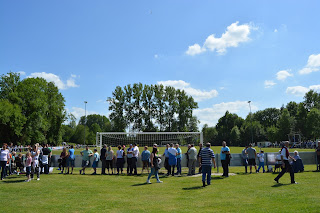 The visitors have the first good chance, already in the 2nd minute of the game. In the 10th minute Richelle United plays a high ball in, the goalkeeper hits it away, but the rebound is finished from close up: 0-1. 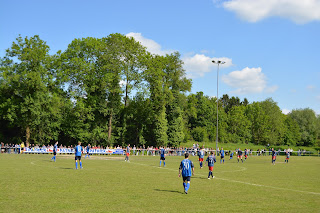 In the 18th minute a good attack of the hosts leads to a fantastic turned half-volley, which is tipped to a corner by the diving goalkeeper. The low corner is back-heeled, but too soft, so the goalie can pick it up. In the next attack the ball bounces in the box and is half-volleyed hard into the goal from 7 meters: 1-1. 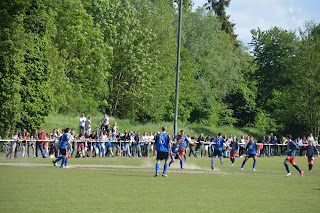 In the 24th minute the visitors have another big chance, but he tries to go around too many players in the box, rather than shoot. In the 33rd minute Richelle has a good attack over left but the cross is missed badly by both the defender and the striker. Half time score: 1-1

The second half starts ferocious. In the 48th minute a big chance for the hosts is saved by the goalkeeper. Two minutes later the visitors volley the ball far over the goal. Then it slow down a bit. In the 63rd minute a Solrézienne corner is headed hard but just over the goal. Overall I rate the quality higher than in the Mulhouse game, but maybe the atmosphere creates different expectations. 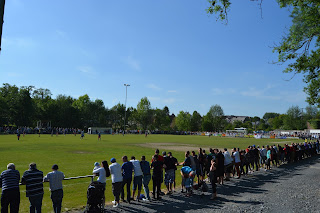 In the 79th minute a Solrézienne cross was headed on and completely missed in a bad attempt at a volley from 5 meter. Two minutes later they get another big chance but the goalie saves. The next minute the arrogant, slow, but good captain of the hosts gets alone in front of the goal but the goalie makes an amazingly safe. 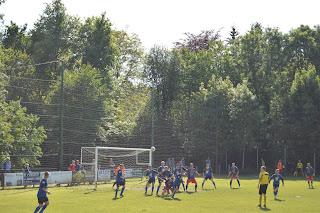 As I am watching the game, several people cycle onto the ground, as there are two fully open roads leading into it – one from the town and one from the woods. At one time two tourists cycle into ground and ask me what game is on! 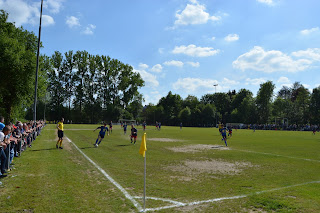 In the last minutes Richelle has two chances but cannot finish. Hence, the final score is 1-1. Extra time! I hadn’t expected this and have to leave, as I have to return my rental car in Paris that evening and it is already 20.30. I later find out that the game went into penalties, which were won 5-6 by FC Richelle United, who will play in the Fourth Division next year.
Posted by Grondhopper at 7:02 PM