M. and I are visiting friends in Jacksonville, in the north of Florida, and combine it with a game of soccer. The Jacksonville Armada FC is a brand new soccer club, founded in 2013, and playing their first season in the North American Soccer League (NASL), the third division in the US, this year. They play their games in the Baseball Grounds of Jacksonville, also known (after its main sponsor) as Community First Park, a fairly generic US baseball stadium that opened roughly ten years and holds 11.000 people. 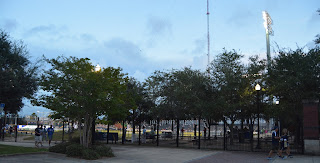 As we park near the stadium (at $10!) we already notice that there are quite a lot of people for this Saturday evening game. Mostly younger families with children, including a lot of Hispanic families, quite usual for US soccer games. It is a gorgeous late summer evening, high 80s (roughly 30C) and dry, if humid. 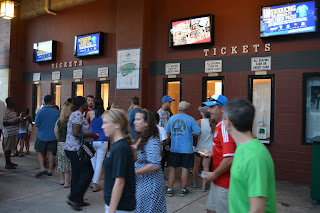 Our friends buy us tickets for the section behind the goal, at a not inconsequential $20 each, which is where the ‘rowdy’ home fans are and next to the away supporters. A good 100 fans had made the 200 miles trip northeast from Tampa, probably the shortest distance in the NASL. 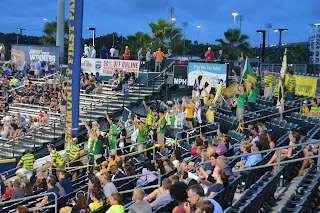 Community First Park is a fairly generic modern minor league baseball stadium, which all seem to use the same bricks and dark green paint for the metal. Baseball stadiums are always a bit odd venues for soccer games, because the shape of the pitch and the stadium are different. Still, there is a very good crowd tonight – the official number is over 7.100, but I doubt more than 5.000 were actually in the stadium. The home team has a small core of fans who drum and sing, but overall most people in the stadium were quite involved in the game – a rarity in baseball stadiums. 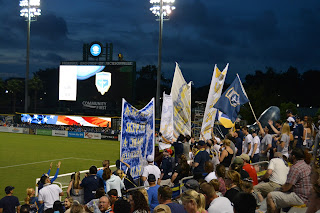 The quality of the game is not bad at all. Everything is a bit imprecise and a bit slow, but both teams try to combine and play reasonably attractive soccer. The Armada has roughly as many US as Latin American players with many coming from Argentina and Colombia. As this is Spanish Heritage week, the home team plays in the Spanish colors (red and gold/yellow) and has the Latin American players make Spanish language messages to the many Hispanic fans. 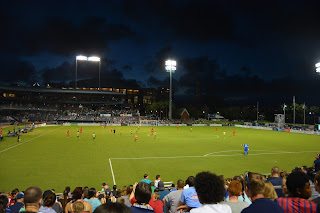 Although the pace is rather slow, the game is entertaining and creates regularly chances and semi-chances, such as shots at goal from outside of the box. For most of the first 30 minutes the Rowdies are the (much) better team, but they don’t finish their chances. As so often in soccer, this is punished, as the Armada scores a nice goal in the 34th minute: 1-0. 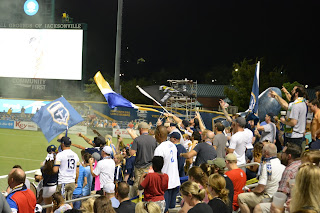 The rest of the first half both teams have a number of shots at or close to goal, mostly from reasonably far out. Both goalies make some saves. The fans get really into the game with the away fans out-singing the home fans. Half time score: 1-0. 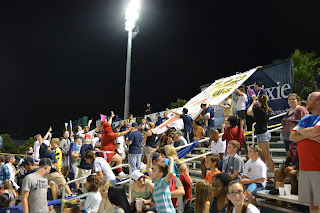 The second half is very similar to the first. The visitors are again a bit better, in part because they have to press for an equalizer, but it is the hosts that score. Great shot flies in and the fans go wild. 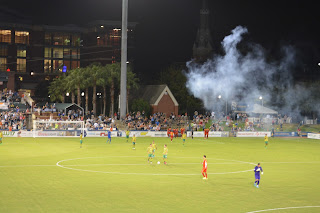 The next 15 minutes, 10 regular and 5 extra time, are entertaining and include several shots and saves, but the final score remains the same: 2-0 for the Jacksonville Armada, which ties them in the standing with their state rivals (incidentally, Fort Lauderdale Strikers are the third Florida team in the current 11-team NASL and Miami FC will join in 2016). 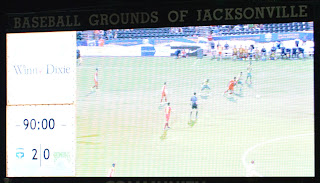 Although I was more distracted by the good company than usual, when I groundhop by myself, I really enjoyed the game and the experience. It is clear that minor league soccer is alive and well in Jacksonville and I wouldn’t be surprised to see this ‘franchise’ move up to the USL and maybe even MLS in the coming years.
Posted by Grondhopper at 7:03 PM