On a Tuesday evening, I drive up to Asheville, a cute alternative-hipster town in the western North Carolina’s Blue Ridge Mountains. It's a 3-4 hour drive from Athens, GA, depending on whether you go the functional or scenic route. On the menu is yet another game in the USL League Two (roughly the Fifth Division), this time in the Deep South Division, between Asheville City SC and the second team of Charlotte Independence. 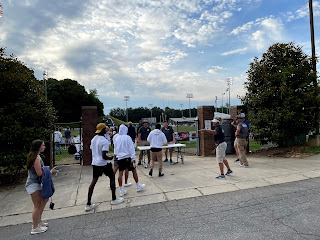 Asheville City SC was founded in 2016 and played in the 3rd Southeast Division of the National Professional Soccer League (NPSL) before joining the USL League 2 in 2019. They play their home games in the soccer stadium of the University of North Carolina Asheville, which is just a pitch with a few small bleachers on one long side. I get in for free, as someone had an extra ticket and paid it forward.

While this means no ticket, I was lucky, as I later read on the website that the game was sold out. They didn’t mention the number of spectators, but I guesstimate some 250 to 300 people. The fans are very (upper) middle class and very white. They are also quite young, although relatively few kids (more students). There is a small group of “ultras” with drums and horns who mostly make "smart" remarks. 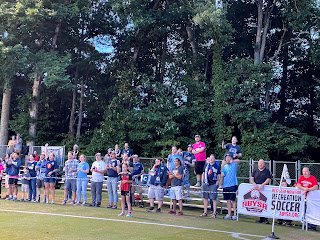 The game seems to be played on real grass, although the pitch is suspiciously even. The players are young, early- to mid-twenties, probably several college players, and there are again very few African American players. The quality of passing and control is quite poor, particularly given the dry but flat pitch, and the pace is not too high. Still, the game flows from side to side with quite a lot of (half) chances. 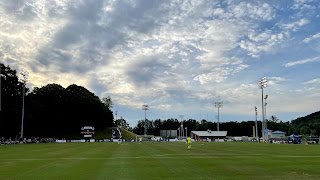 In the 19th minute Asheville has a long and deep cross pass that the striker takes directly, with the inside of his foot, but the goalie saves it spectacularly in the short corner. The hosts continue to pressure and in the 26th minute a player gets the ball almost free in front of the goal (at some 5 meters) but he hits it with both of his legs. 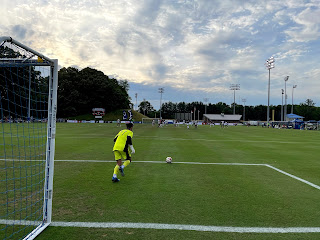 In the 30th minute the visitors get a ball into the box, which is headed through, but easily picked up by the Asheville goalie. A few minutes later a Charlotte defender gives a too soft pass back but his goalie courageously hits the ball just a second before the striker can kick it. Just before half time, a free kick is missed by the Asheville goalie, but, after few pinball moments, he can pick it up after all. Half time score: 0-0.

The game restarts at a much higher pace. In the 48th minute Charlotte Independence 2 scores out of quick attack. To my surprise, there are actually some people in the audience applauding. Not that Charlotte is far away, just a 2 hour drive, but few people travel in the US, let alone for a second team – the first team of Charlotte Independence plays in the USL Championship (kind of Third Division). I went to see them in 2015 (report here). 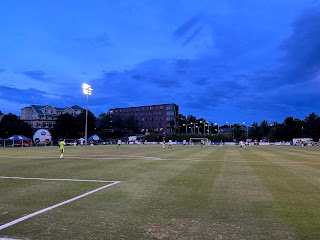 Just a few minutes after the opener, the hosts score from a rebound: 1-1. Not much later, an Asheville striker is fouled just outside of the penalty box. The free kick leads to a header that goes just over. In the 55th minute a quick counter by the hosts leads to a good cross but a terrible finish, meters from goal. 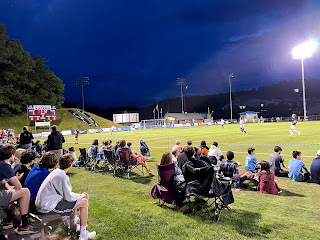 In the rest of the second half there is a lot of movement of both teams that lead to (half) chances on both sides. However, given that both the control and the passing is not very good, few of the finishes end between the posts and few challenge the goalies. Hence, the final score remains 1-1. 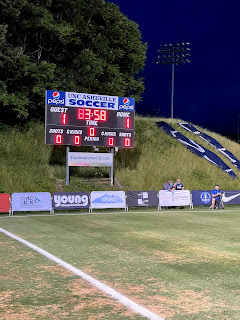 Overall, it was a quite entertaining game, despite the mediocre individual quality of the players. It never felt as a (semi) professional soccer game though, which technically the USL League 2 isn’t, but rather a summer evening game of two local teams. Still, if you are in Asheville, which is a town definitely worth visiting, and you can catch a home game of City SC, do it.

Posted by Grondhopper at 5:43 PM