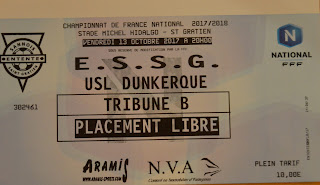 I am in Paris for work, so I have decided to start my groundhop-weekend with my brother in the northwestern suburb of Sannois, where the local L’Entente Sannois Saint-Gratien plays in the Championnat National (Third Division). Unfortunately, the “competent” personnel of the Paris public transport put me on the wrong train, to the southwest of the city, which means that I arrive ten minutes too late at the train station and my brother and I arrive 30 minutes late at the Place des Sports Michel Hidalgo. 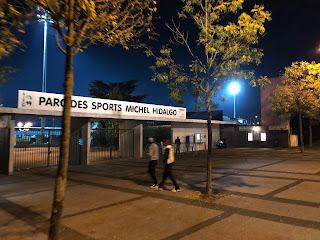 The stadium, named after the famous former coach of the French national team – why, I don’t know, as he seem to have no personal tie to the team or town – holds 8,000 and is quite cozy. We get a ticket for a very reasonable €10 and take our place on the covered stand. 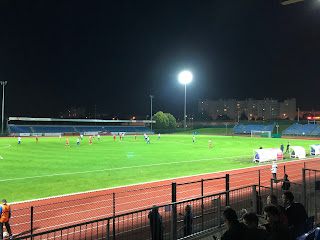 There are about 350 people on this rainy, but not too cold, Friday evening. The audience is remarkably mixed in terms of age and ethnicity, but there are few women. In fact, There are some 50 away supporters, who have made the ca. 300 km trek from Dunkirk. 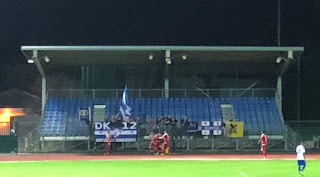 When we enter the stadium, roughly 30 minutes late, the score is 0-1. There are some chances on both side, but the general level of play is low, and the game is quite slow. In the 44th minute the hosts attack, poor defense, the rebound is lobbed over the goalie, but headed out by a defender. Half time score: 0-1. 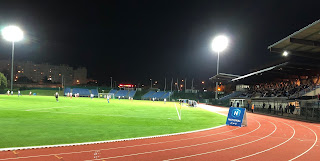 In the first minute of the second half the visitors have a long pass, the striker goes at it, the goalie is too late, and the striker finishes cool: 0-2. The home fans take it pretty easily, seemingly used to home losses. In fact, both clubs are mid-table teams this season. 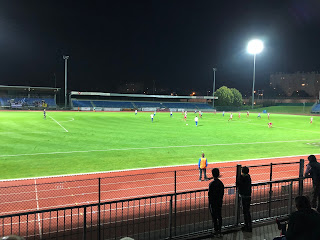 Not too much happens afterwards. It is clear that USL is not going to give away their lead and the game is getting too slow to surprise anyone. The fans remain calm and reasonably satisfied. Most people are here to support their local club and meet friends. Final score: 0-2. 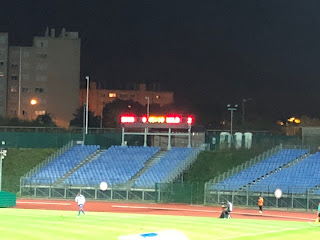 I know that football fans want to go to see Paris Saint-Germain when they are in Paris, but when you are a groundhopper, make your way to Sannois and experience the real old-school football atmosphere of the neighborhood team.
Posted by Grondhopper at 4:09 PM