After several failed attempts to groundhop in 2012, including a last minute canceled trip to Europe, I finally had a groundhop-weekend again. Almost one year since my last groundhop trip to Canada, I was again moving up north, this time accompanied by my lovely wife, to see two games. The first game was in the Midwest Division of the fairly obscure National Premier Soccer League. 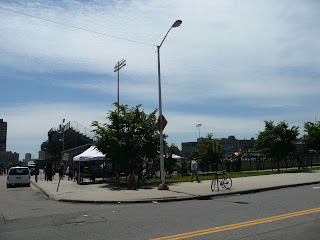 The great sport city of Detroit has not played much role in soccer, but the newly founded Detroit City FC is hoping to change this. They were founded by 5 local residents, who wanted their own club to help build community through soccer. Their inaugural season is played at Cass Tech Stadium, the football stadium of a downtown high school. 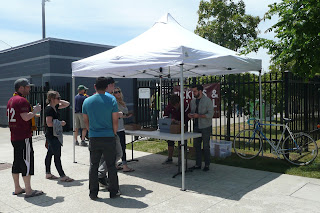 It’s a nice and sunny day as we arrive fifteen minutes before kick-off. We park opposite to the stadium and go to the ticket booth in front of the entrance: $5 per person buys us the game and a beautiful ticket. 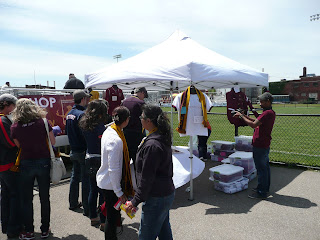 Le Rouge, as DCFC is known among the insiders, has a pretty decent 'shop', i.e. a stand, where they sell various t-shirts, jerseys, and scarves. I am amazed by both the professional gear (sponsored by Nike) and by how many people actually wear the gear. This is undoubtedly helped by the fact that the crowd is very white male middle class (incl. alternatives); amazing in such a multicultural city. 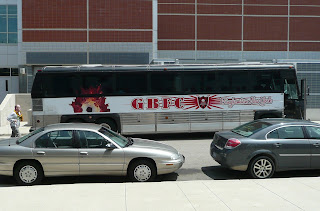 The opponent is Greater Binghamton FC, which has made the ca. 500 mile (800 km) trip by team bus. Not surprisingly, no away supporters have joined them. The Binghamton team seems to consist mostly of college students. As there are no dug-outs, their reserves, and those of their DCFC counterparts, have to sit on the stand (a novelty for me, as I have never seen that before in my 500+ groundhops). 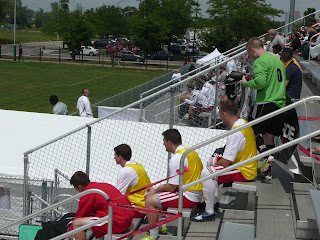 There are roughly 500 people on this pleasant Saturday afternoon, almost exclusively white, but unlike at most lower division games in the US, there are remarkably few families or mothers with children. These people are really here for the game. Even more remarkable is the group of ca. 200 ultras, a sort of mini-Timbers Army (of the Portland Timbers), who chant and sing during the whole game. 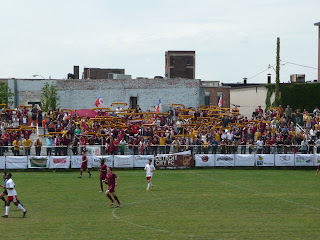 The game is defined by the unfortunate combination of a bumpy pitch (real grass) and poor technique. In the 3rd minute DCFC plays a great through ball, but the Binghamton goalie safes. In the 18th another through ball does meet a cool finish: 1-0 for the home team! 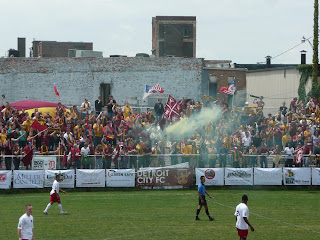 DCFC remains the dominant side and in the 24th minute they attack over the right flank, the GBFC goalie comes out of his goal, but the lob goes in the side net. Two minutes later a DCFC corner leads to a header that is cleared from line by a header of a defender. 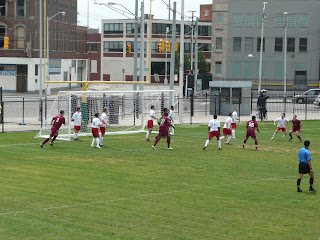 The Asian-American referee adopts a British style, and let the game flow, which is nice. Both teams play physical but fair. In the 33rd minute a good effort on the right is followed by a soft low shot that is missed by the Binghamton goalkeeper: 2-0. Six minutes later the visitors go alone at the Detroit goalie, but he saves. The ultras are enjoying themselves, singing “Take me home to Detroit City, where the roads are shit but the girls are pretty” (to the tunes of Guns & Roses). Half time: 2-0.

The second half is messy, in part because high balls have become more difficult because of the strong wind. In the 56th minute a little pass through is finished in a calm and collected manner: 3-0. In the 59th minute Detroit attacks over the right, the ball is brought in but bounces over the striker’s foot. 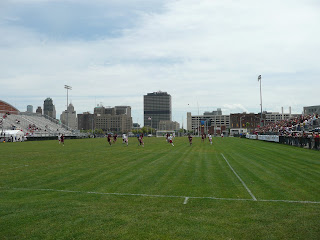 In the 73rd minute a Binghamton sub almost scores on first contact. Four minutes later Detroit responds: a good attack over right and the cross is finished from 2 meter in the back: 4-0. The ultras, who have been singing all game, show their pride and celebrate their team. 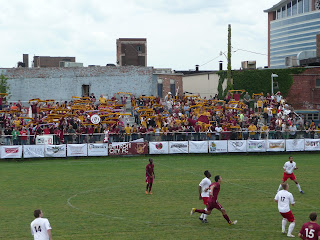 After the 4-0 the visitors are incredibly tame. In the 84th minute an attack over the whole pitch is set up and almost finished by the Detroit captain. Two minutes later a great home counter goes just wide. The full time score is: 4-0. 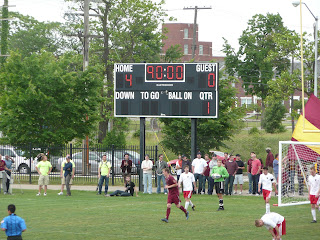 My first groundhop of 2012 was a very pleasant surprise. While the game itself was mediocre at best, the atmosphere was absolutely great! Seldom have I been so entertained by a US soccer crowd, let alone in the lower divisions, than at Detroit City FC. If the club can reach out beyond its current relatively small and homogeneous crowd, something beautiful could be growing in the Motor City!
Posted by Grondhopper at 11:40 AM

I think that Detroit has the name and they can have the team that it can match great teams.