One day after the cozy game in the NPSL, it was time for a larger venue, BMO Field in Toronto, Ontario, normally home to Toronto FC. As part of the warm-up schedule for the CONCACAF Qualifiers for the FIFA 2014 World Cup in Brazil, as well as to celebrate the Centennial of Canadian Soccer, the national teams of Canada and the US met for the CSA Centennial Match. While this was a friendly, it is doubtful Canadians can really play a friendly against their big southern brother. 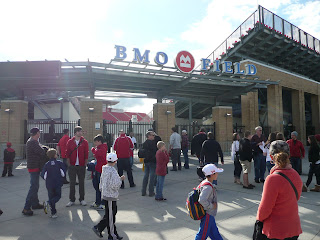 We had bought tickets in advance, which were just CAN$28.50 (without the CAN$10 handling fees of the biggest rip-off in entertainment: Ticketmaster). The stadium opened its gates one hour before kick-off, but it wasn’t really that crowded yet. 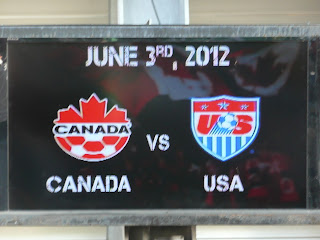 After circling the stadium and enjoying the mild weather, it was time to join the ca. 200 other US fans. Most Americans seemed from the Buffalo area in upstate New York, which is just 2 hours away from Toronto. There were also some hardcore Team USA fans, who follow the US soccer team around the world. 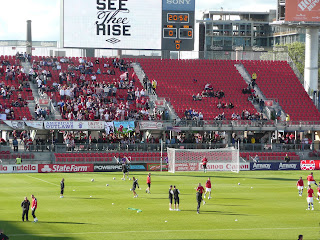 Surprisingly, as Toronto FC tends to attract pretty decent crowds in the 20.195-person BMO Field, the official attendance is 15.247. However, there are at best some 12.500 people actually in the stadium. The crowd is quite diverse, reflecting the incredible diversity of the host city, but also very quiet. The hardcore fans are in one corner, yet little will be heard of them either. 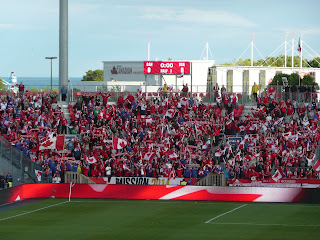 Despite the nice temperature, neither the fans no the players ever really get into the game. My wife is deeply disappointed by the American fans, who hardly ever chant or sing, and if they do, they don’t come much further than: “We believe that we can win.” Still, it is better than the home fans, who are the quietest bunch I have ever (not) heard. 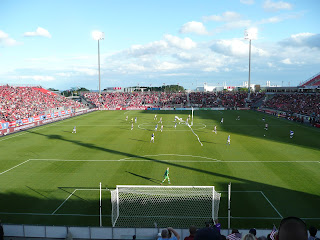 I could tell you about the game, but just think about paint drying… in fact, think about a fairly bland paint drying. Aweful!!! The US hardly tries to attack, and as always Dempsey and Donovan can’t link up, while the Canadians act as if they are facing European and World Cup champions Spain in Madrid… terrified! Hence, 0-0 at half time.


The second time is even worse, if that would be possible. The ‘pace’ drops further, the US doesn’t create anything anymore, and the Canadians do not realize that this is the one time they can defeat their arch rivals. Balls are passed around in the midfield, hardly ever more than twice before it is lost. The most exciting thing is a plane over the pitch. 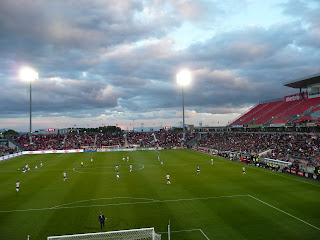 The referee is dragged down to the level of the game, and no longer runs his diagonals, but prefers to walk around the middle and make terrible calls as a consequence. I think everyone is relieved when the final whistle blows. Even if they would have continued for another five years they wouldn’t have scored. 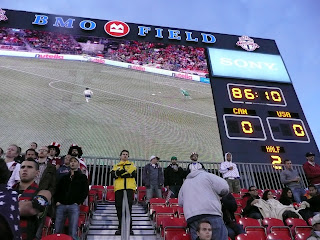 This was one of the worst games I have ever seen! Clearly soccer has a very long way to go in North America, both in Canada and the US; not just in terms of quality of the players, but also of the fans.
Posted by Grondhopper at 12:38 PM

Canada as Soccer team has been growing a lot. They can match Mexico or USA yet but they might can.