The first game of my groundhopweekend with TM takes us to Chambly, a small town just north of Paris. The local FC Chambly-Oise plays in the Championnat National, the Third Division of French football and the lowest national and professional league. Although we left the Netherlands in time, despite me getting lost for a while, we get stuck in a long traffic jam around Lille and start to worry whether we will make kick-off at 19.00. Half an hour later we worry whether we will even make the second half. In the end, we arrive 5 minutes late. 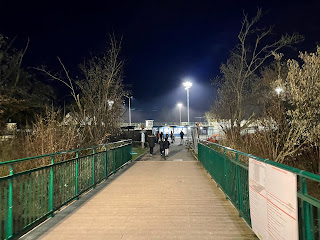 We are surprised how many cars there are, but later conclude that, because the ground is in the middle of nowhere, and there is no public transports, everyone is come in their own car. After a COVID vaccination check, and confusion about my unprofessional US vaccination card, we buy tickets for the main stand (at €15 each). 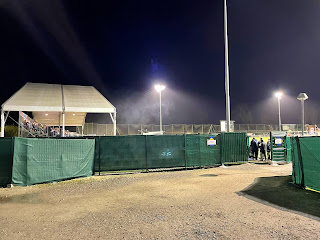 The Stade des Marais looks like work in progress, with one stand behind the goal and one on just half of the long side. Both seem semi-permanent structures, one truly covered and the other covered by a weird, temporary tent structure. 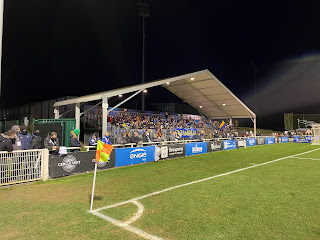 There are some 400-500 people in the stadium. The audience is very male, mostly older (40+), and somewhat mixed ethnically (much less than the town, undoubtedly). Remarkable how few women and children are around. There don’t seem to be any away fans – Villefranche-sur-Saône is almost 500 km away from Chambly, so that wasn’t too surprising. FC Chambly-Oise is 14th in the league, FC Villefranche-Boujelais 7th. 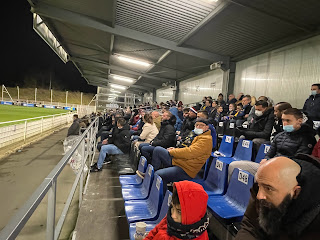 We are internally divided whether the pitch is natural grass (T) or some modern type of AstroTurf (me). In any case, it looks good and smooth. Still, the home team struggles, while the guests have several half chances, before they finally score 0-1 in the 39th minute, after a cross from the left is finished with a half volley. This is also the half time score, which flatters Chambly.

In the 55th minute, a bit out of nowhere, the guests score with a dry, low shot from top of the box, which the goalie sees too late: 0-2. 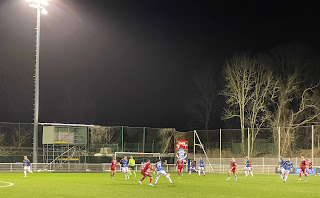 The guests are much better, even if Chambly has more possession. They create at least five clear chances through excellent play — but also because the hosts are so poor. Fortunately for the hosts, the Villefranche strikers are off target. 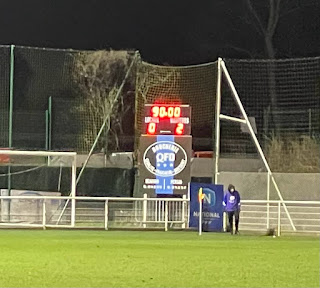 Although the game ends 0-2, and was never a real contest, it was entertaining, mostly because of the guests. The atmosphere was decent. A small crowd of people used to seeing their team loose and a few who occasionally sing. Definitely in the margins of French professional football.