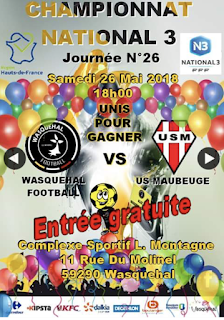 Groundhopping in Europe at the end of May is not easy. Not at all. Given that I had to give a lecture in the morning, I had only 4-5 hours to drive from the middle of the Netherlands. This is how I ended up in the Championnat National 3, technically the Fifth Division in France. 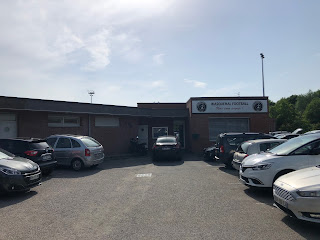 Wasquehal is a small town just across the Belgian border (close to Mouscroun). Technically, Wasquehal Football is a new club, founded in 2017, as a merger of two local teams, dating back to 1924! They play at the Complexe sportif Lucien Montagne, which looks relatively empty when I arrive. 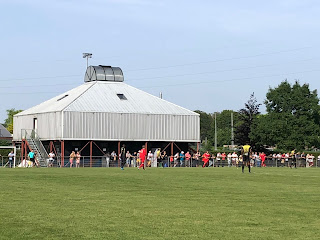 At the complex is the Stade Léo Lagrange, with one stand, and a capacity of 500. However, today, they play on a pitch behind that "stadium." Given that it is the last game of the season, the game is free, which unfortunately also means that I don't get a ticket as a souvenir (although I doubt they have tickets during regular games). 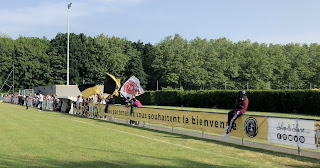 There are between 50 and 100 supporters, all but a few from the home team. To be fair, Maubeuge is almost 100 km away. There are even a few fans with flags and there is a drum. 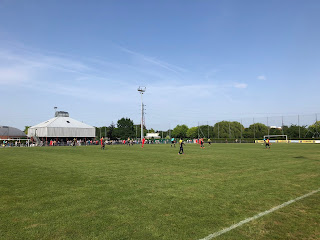 I don't remember much of the game, except that it ebbed and flowed pretty decently, but the quality of play was quite atrocious. The fans were calm and sometime involved on this very pleasant Summer evening. 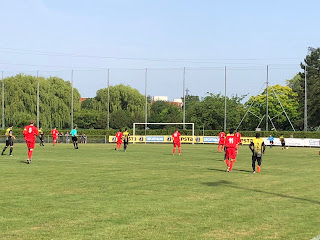 As Championnat National 3 used to be called Championnat de France Amateur 2, it is not surprising that everything reminds me of my Dutch amateur team of my youth. People hanging over the advertisement boards, in small groups of friends, talking about the past week and sometimes shouting at the game. 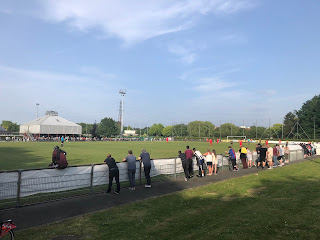 I caught the goal of the home team, scored by penalty, which, I think, equalized the game.  Enthusiasm remains within borders. :-)

As I again still had some driving to do, and had been without any food or drink because there was no concession stand anywhere to be found, I left 20 minutes early at a 1-1 score. 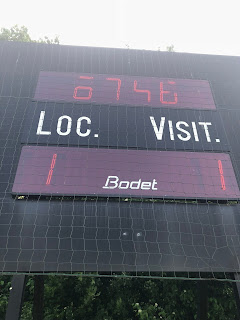 Let's just say that Wasquehal Football does not need to be (high) on your groundhopping bucket list.
Posted by Grondhopper at 6:44 PM