I spent a lot of time in Prague between 1998 and 2002 and had seen most of the teams already, so I had to be more creative to maximize my weekend in the city this time. I found a game at 10.15 in the morning in Vyšehrad, a nice residential area in a hilly part of Prague, mostly known for its touristic attractions. 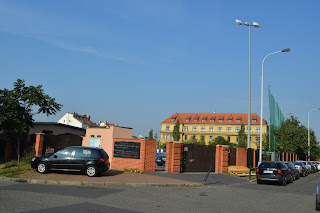 The Stadion Slavoj Vyšehrad is a tiny ground tucked away in a nice residential area of low rises. It allegedly holds 2,500 people but doesn’t have any stands. I pay CZK 150 (ca. $6) to get in, which is actually quite pricey for the Czech Republic. Moreover, I don’t get a ticket. 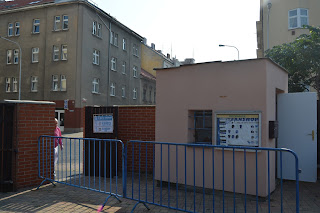 FK Slavoj Vyšehrad is one of the oldest teams in Prague, celebrating its centennial next year, but has always played at low levels. Today it plays in the Česká fotbalová liga (Bohemian Football League, ČFL), which is one of the two leagues of the third tier of the Czech Republic. 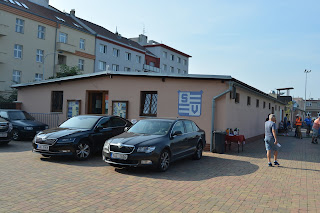 The opponent is FK Králův Dvůr, which comes from the tiny town of Králův Dvůr, which is roughly 35 km or half an hour drive from Prague. This notwithstanding, I can only find three away fans (which seem the wife and parents of one of the players) among the ca. 100 spectators – which are roughly 90 percent male.

The game is played on a small pitch of Astroturf, which makes control of the ball easier. The game starts hectic with attacks from both sides following each other. In the 8th minute the hosts get a corner, which is kicked to the second post where it hosts the body of a defender and goes in: 1-0. 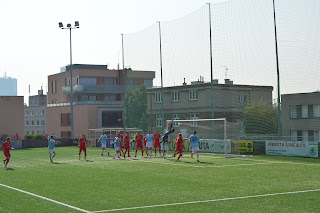 In the 18th minute Slavoj has a good high through ball but a defender saves in a last ditch effort. Two minutes later a rebound is shot from 20 meters at the goalie. In the next minutes both sides have chances but the goalies do their jobs. 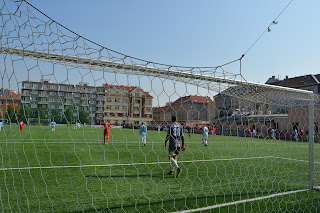 Slavoj is clearly the better team. Passing and control are quite good, which is undoubtedly helped by the Astroturf pitch. In the 34th minute the visitors have a great chance with a pass inside the box but the ball is slided from 3 meters at a defender. Five minutes later a Slavoj player takes a corner directly as a volley and although it goes wide and over, it is not bad. 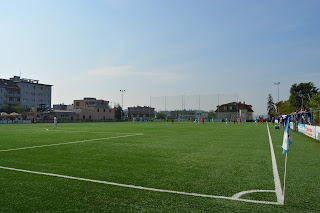 In the 40th the hosts have a low hard shot, which is saved by the goalkeeper. The next attack leads to a good pass in that is scored from 5 meters at the second post: 2-0. This is also the half time score. 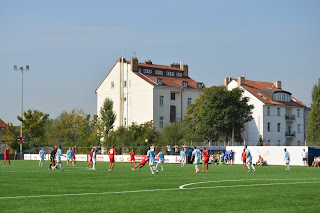 At half time I get a coffee at the Italian restaurant that is somehow connected to the stadium, after which I get a parek (sausage) at the grill in the nice café area. The whole atmosphere reminds me of going to see my own amateur team when I was young. The second half started with a remarkable feat. In the 49th minute Slavoj gets a free kick, just outside of the penalty box, and the player puts it just over the wall and into the corner: 3-0. Beautiful even if he will never do this again in his life, not even in practice. 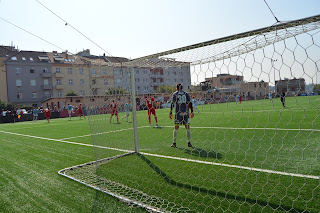 In the 53rd minute a slow and weird attack by the hosts rolls at the post before the goalie clears it with his legs. The pace drops now as both teams know the game is decided. In the 72nd minute a cleaver Slavoj pass leads to a high cross that is volleyed at the goalkeeper. 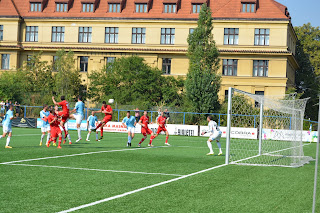 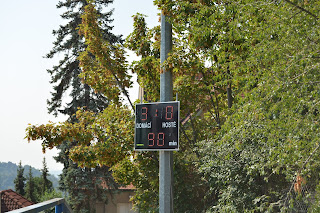 Prague has many bigger teams to visit, but if the weather is nice, try to work in Slavoj in the morning. It’s worth it.
Posted by Grondhopper at 6:45 PM