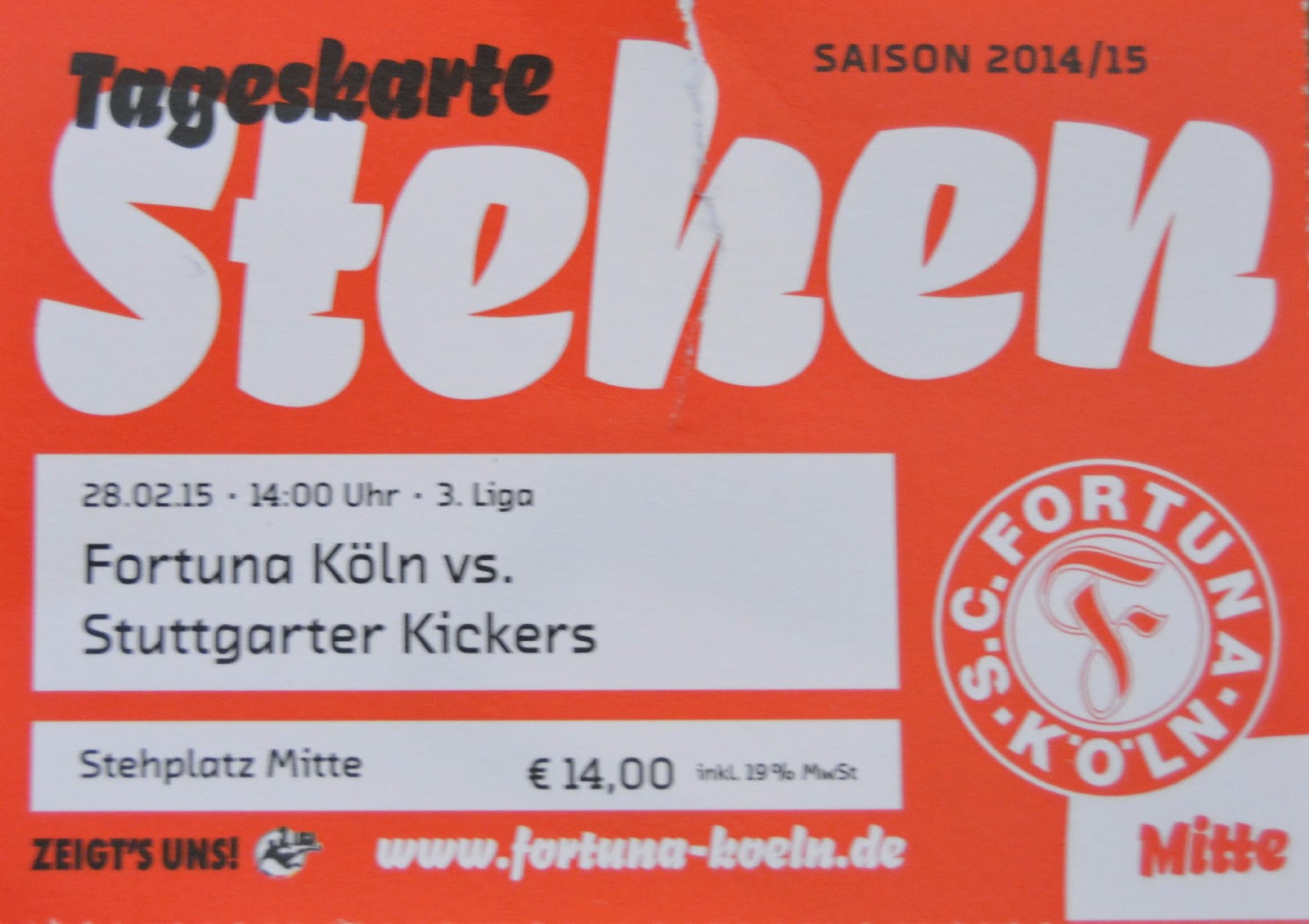 After the Patro Eisden MM game we had driven to Cologne to spend the night –which, with a slight delay because of GPS confusion, worked out well. We decided to drive early to the stadium to find a convenient parking spot. After parking the car opposite from the stadium, we took the tram into the city for some sightseeing. 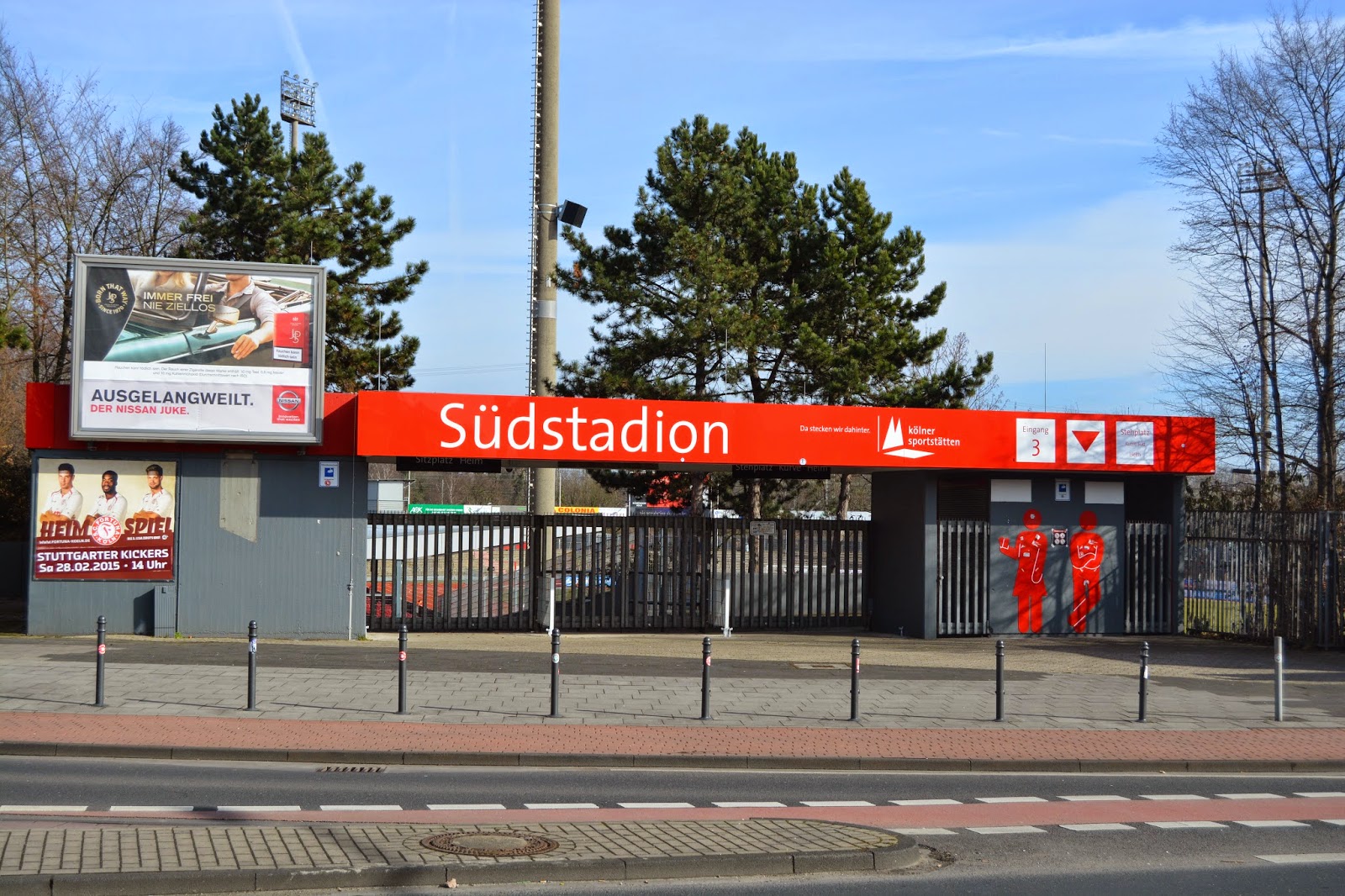 At 13:45 we were back at the Südstadion (South Stadium), home of Die Fortunen, the second team of Cologne. The stadium is integrated into a residential area in (what used to be) the south part of the city. As we returned, it was lively around the stadium, particularly in front of the ticket offices, but more cosy than busy. 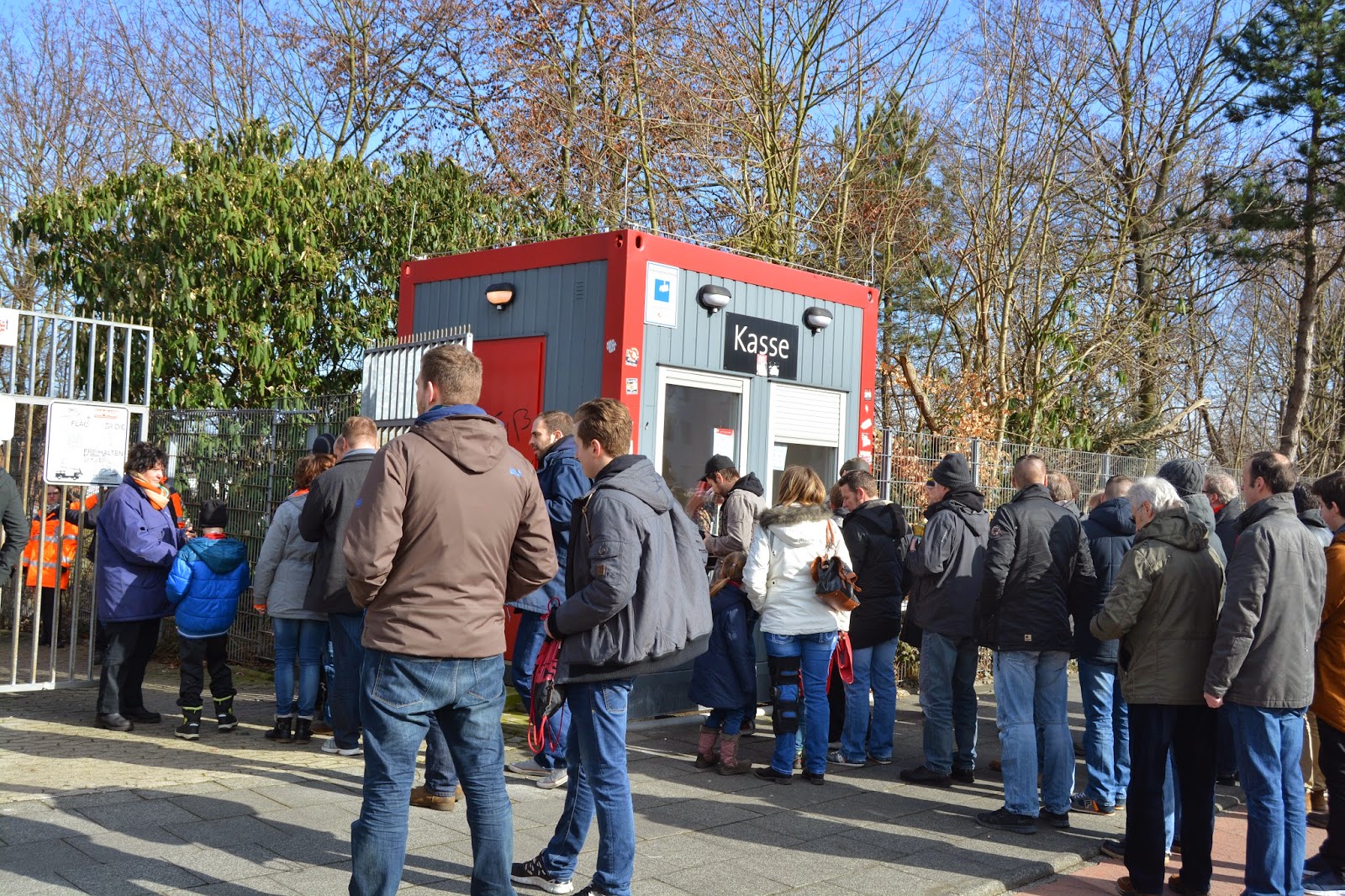 Going to the second, let alone third, team of a city is what groundhopping is all about. So, seeing a game between the second team of Cologne and the second team of Stuttgart was really the ultimate experience! Both are well-established teams in the lower leagues of German football, currently playing in the 3. Liga (third Division). After buying our (awesome) tickets, for 14 euro each, we joined the home fans at the uncovered standing-only tribune. 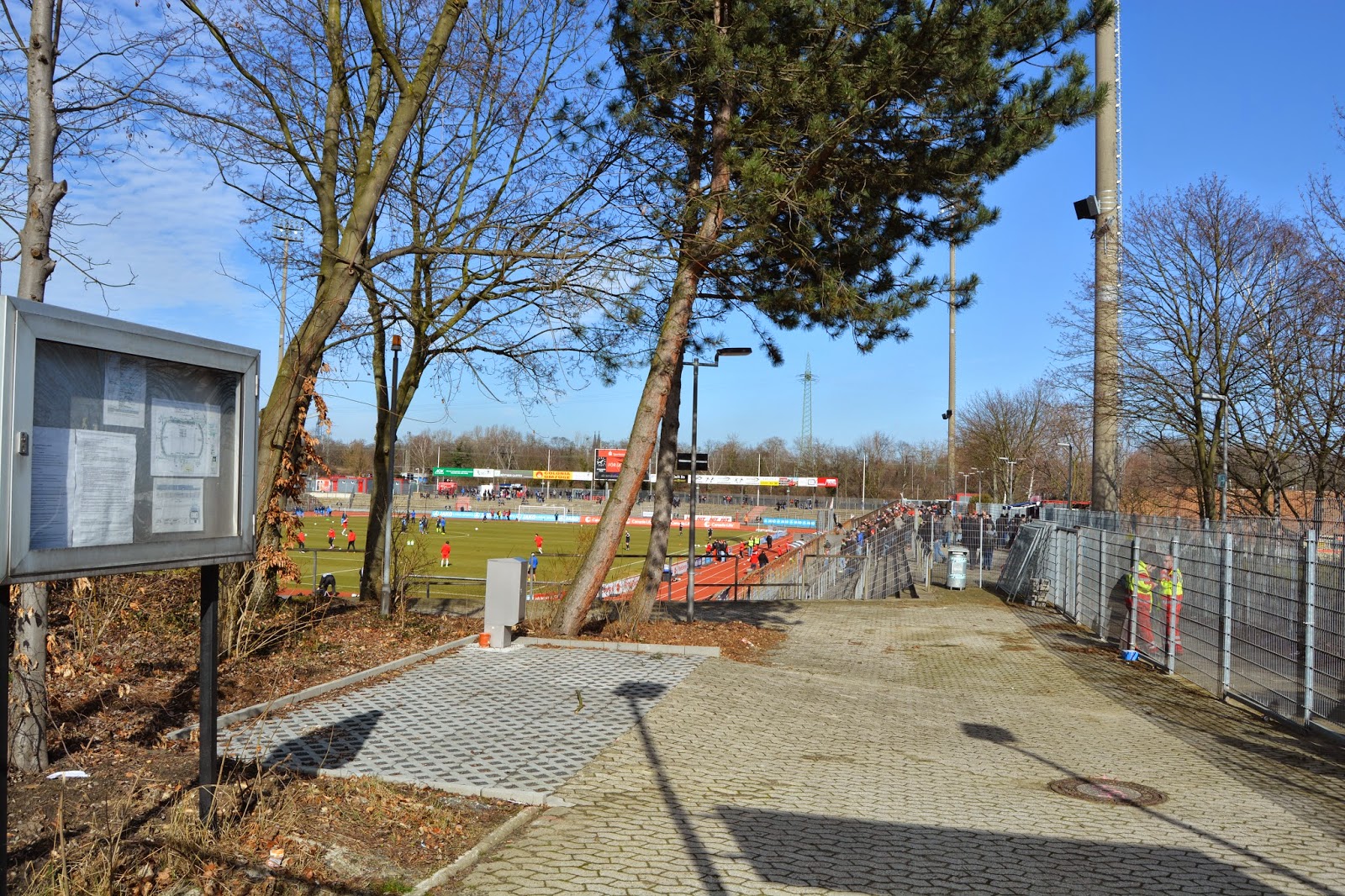 The Südstadion opened in 1979 and was renovated in both 2012 and 2014. It is a classic German stadium, with a track around the pitch, which can hold almost 15,000 people. According to the official game report there were 1,568 people at this particular game. Roughly 300 had made the 366 km (228 miles) trip north from Stuttgart. 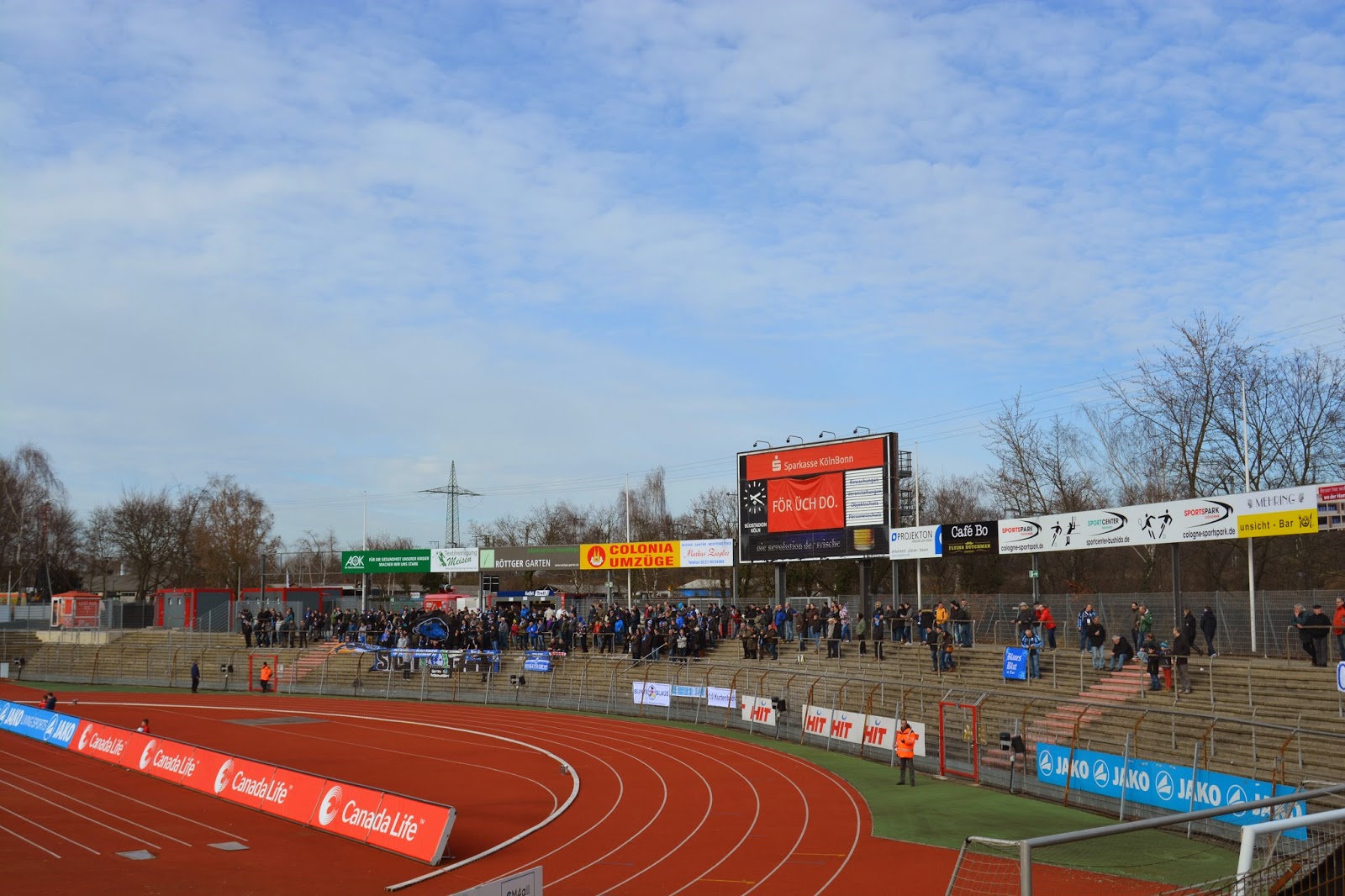 The game starts quite furious, with good chances on both sides in the first two minutes. In the 5th minute a good Fortuna counter is saved by the Kickers goalie. In the 19th minute things go south for the home team: a defender looses the ball and fouls his opponent. Stuttgart converts the penalty: 0-1. 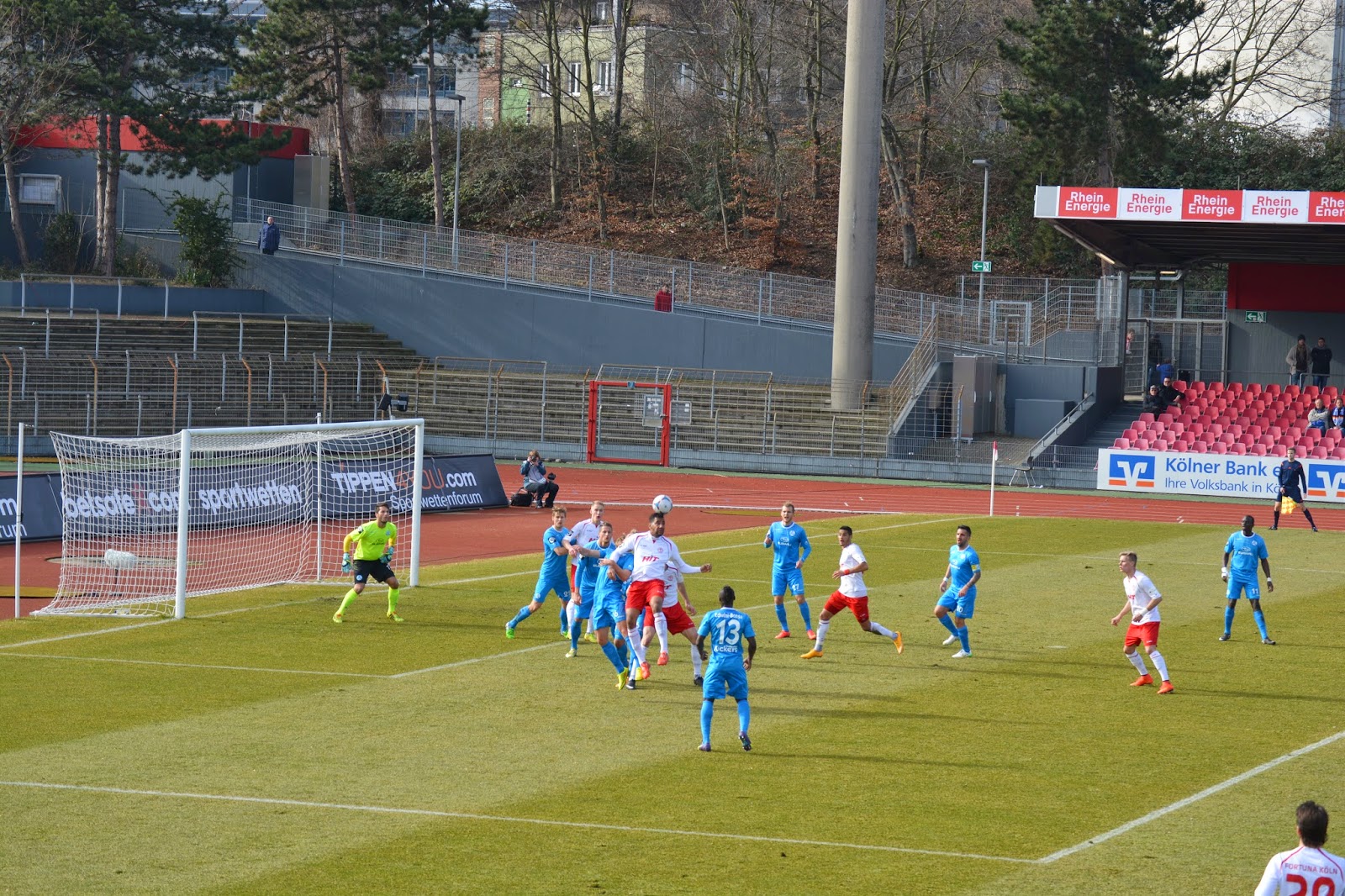 Despite several good chances Fortuna is unable to score a goal. In contrast, the Kickers sit back and counter. In the 40th minute a good attack ends with a brilliant finish: 0-2. The fans around us increase their quite humorous sarcasm, while some still believe. One clearly hurt Fortuna fan asks rhetorically: “Man kann doch nicht gegen so eine Gurkentruppe verlieren” (One cannot really loose against such a group of pickles, can one?”). Half time score is 0-2.


During half-time several home fans tell us that this is the worst game of Fortuna Köln this season and that they are normally much better. We hope this is true, for them, as so far they haven’t been playing very well. And the second half doesn’t get much better. For example, in the 62th minute the visitors easily cut through the home defense, but the shot is stopped by the goalkeeper. 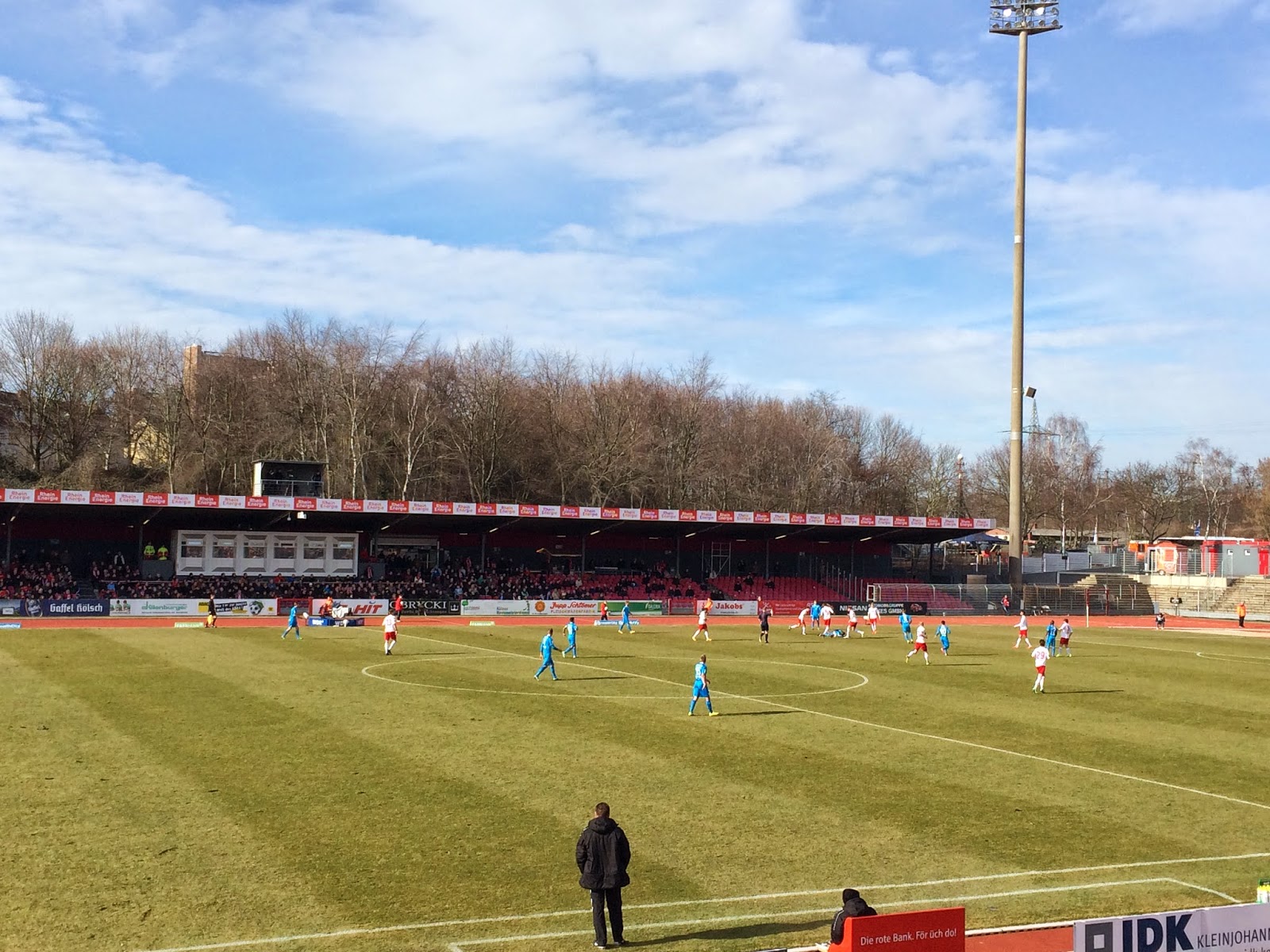 As the complaints increase near the end of the game, and even the most hardcore optimists cannot see a way out, an easy counter of the Kickers leads to a shot that is deflected to the cross bar by the goalie. In the 85th minute the hosts have their first good attack of the second half, but the striker hits the Stuttgart goalkeeper. Final score: 0-2. 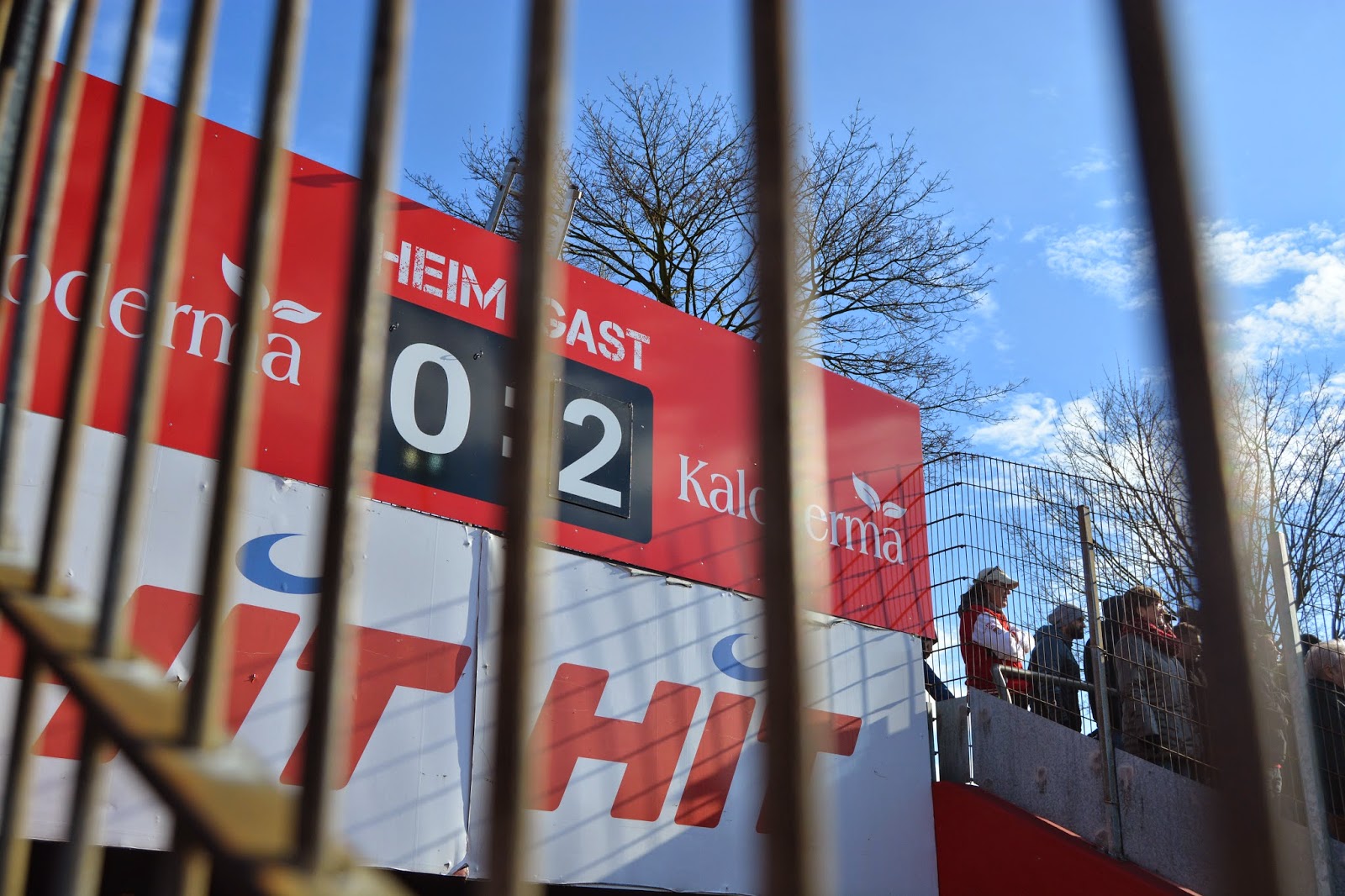 Although we probably indeed saw the worst home game of the season, the experience did not disappoint. Somehow, the smaller club in the big city has the most authentic football atmosphere and SC Fortuna Köln is a good example of this.
Posted by Grondhopper at 7:06 PM