For business in Toronto, Canada, I decided to see a game of Canadian Football with my wife. We drove the 44 miles (73 km) to Hamilton, Steel Town, Canada. This Friday night the Hamilton Tiger-Cats were taking on the Edmonton Eskimos. 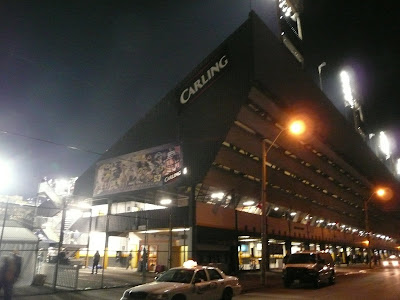 We parked close to the Ivor Wynne Stadium, a large, old football stadium with a capacity of 30.000. It has been the home of the Tiger-Cats since 1950 and I doubt much was invested in it since that time. It has the shape and atmosphere of a high school football stadium, but then just a very big one. Oh, and an expensive one, as our tickets for the top ring of the stadium were CAD 29 a piece (ca. USD 29 or EUR 21). 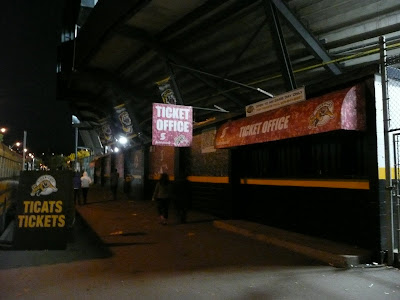 The stadium was roughly three-quarter filled, mostly blue collar workers, many seem to know each other. Reminded me of going to soccer games at provincial clubs. Now, Canadian Football is very similar to American Football, but there are (at least) two major differences: (1) there are only three tries (not four); (2) you get 1 point for a punt that ends in the endzone (‘single’). As a consequence of the first difference, the game is much quicker than American Football with the ball much more often changing sides. 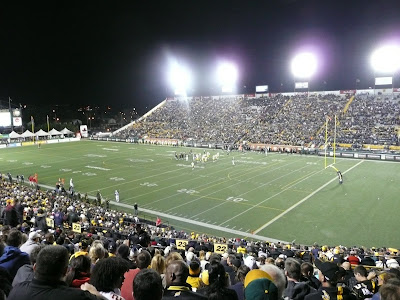 The game was dominated from the beginning by the home team, one of the dynasties in Canadian Football (seemingly similar to the Pittsburgh Steelers in the US). Because you have only two real plays, the first one is almost always thrown. Depending on the outcome of the first, the second is ran or thrown again. In most cases, the third down is kicked. In the first period the Tiger-Cats scored one touchdown, through running the ball.

The second period was more exciting, as well as confusing, with the Tiger-Cats first scoring through a ‘safety’ (9-0) and then by ‘single’, after a punt bounced in the endzone (10-0). Then, the Eskimos finally hit back, by a touchdown: 10-7. The first half is ended by a field goal of the Tiger-Cats: 13-7. Half Time. 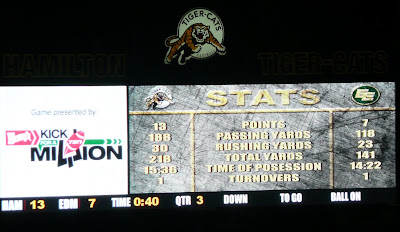 In the third period the Tiger-Cats take the initiative again, scoring a touchdown: 20-7. But the Eskimos hang in with a field goal (20-10) and a single (20-11). But in the fourth and final period the hosts make an end to any last speculation. They score a touchdown (26-11), but when they go for the conversion there is a flag, and they decide to go for a play conversion (28-11). 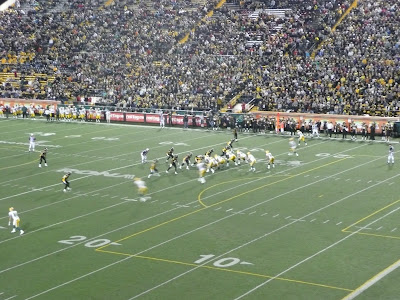 Although it had become quite cold, almost all people were still in the stadium, enjoying the game, the company, and the beer. I don’t think any Eskimos supporters were in the stadium; it is 2.050 miles (3.300 km) from Edmonton to Hamilton! We stayed until what turned out to be the last touchdown (35-11). 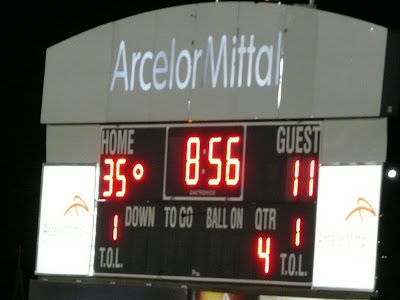 We had an excellent time at the game! Canadian Football is much faster than American Football, though this makes it, oddly enough, also a bit less exciting. In terms of atmosphere, it is in between college football and NFL: it has the class base of NFL, but the familiarity of college. Anyone who has a chance to see a game, should definitely do so.
Posted by Grondhopper at 1:42 PM

This doens't belong on a soccer blog!
Nasenbär, stay true to the real game !!