Having stayed the night in Stuttgart, I had a short drive to the small town of Aalen in the southwest of Germany. I parked in the residential area next to the stadium and joined the short queue in front of the ticket office. Although I ordered a ticket for the covered stand, knowing it was going to rain, I got a cheaper ticket, for 9 Euro, which turned out to be not for the covered stand (despite the fact that I asked to make sure). 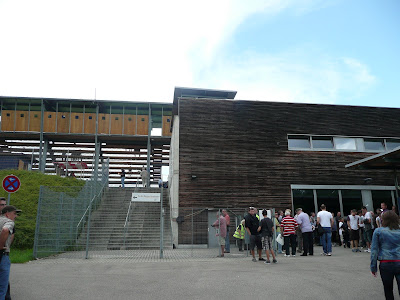 The Scholz Arena was opened in 1949, but seriously renovated in 2002-3. It is the home ground of the Verein für Rasenspiele 1921 Aalen e. V. (Association for Grass Games) and has a capacity of over 11.000, which mostly sit on the two covered stands, although there is also a non-covered standing part behind one of the goals, of which one part houses the away fans. For this game, some 100 Unterhaching fans had made the roughly 200 km trip from Munich; which is among the closest away games for them. 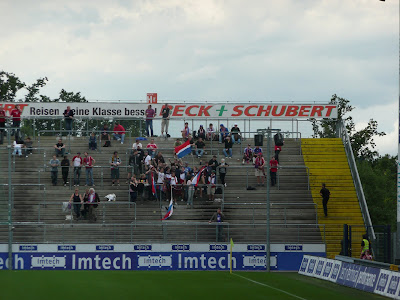 The most striking aspects of the Scholz Arena are the wooden elements of the outside of one part of the stadium and the small restaurant plus terrace within the stadium. It looks totally out of place and I cannot imagine how it would look after a team like Feyenoord or Chelsea would come and visit. 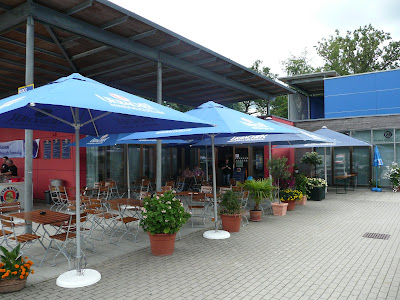 Despite being early August in south Germany, it was cold and windy. It was clear that it was going to rain, and rain hard. This notwithstanding, 4.089 people had turned up for this second home game of the 3. Liga (Third Division) season 2010-11. Neither team had started the new season well, they were numbers 17 and 19 at that time (out of 20), so both teams expected a win. A small group of Aalen ultras waved flags and sang songs, but overall there wasn’t too much atmosphere. 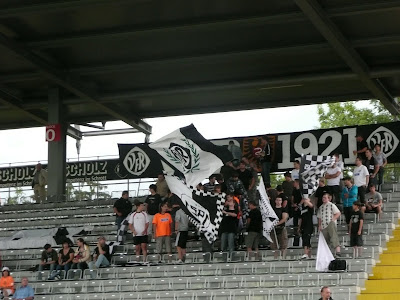 The first half saw few real good attacks or chances, even if Aalen was clearly the better team. They had a couple of good attacks, but were never able to finish them. As it started to rain hard, I joined the huge groups of people who took shelter under one of the main stands, which provided cover from the rain, not the wind. I mainly amused myself with watching Klaus “Auge” Augenthaler, the famous former Bayern München and Deutschland defender, now the critical and often disappointed coach of Unterhaching. 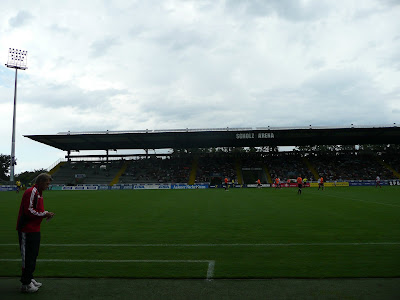 Watching Auge, and listening to the various comments of Aalen fans to him (to which he at times even reacted – all very civil, mind you), helped me get through this terrible first half. One of the best chances came in the 30th minute, when a cross of Aalen was missed by everyone and the following shot from outside of the box was easily caught by the goalie. 0-0 was the only logical half time score.


The second half doesn’t get much better. In the 65th minute a free kick of Aalen lands in the hands of the Unterhaching goalie because everyone misses it. A couple of minutes a free header for the hosts goes wide. While the rain and wind don’t make it easy to play, this was really bad. 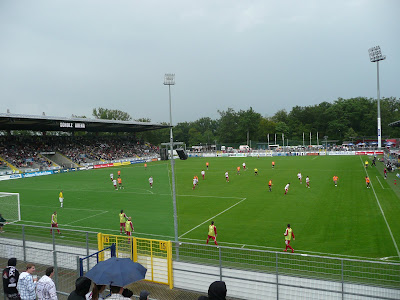 It would take until the 85th minute for Unterhaching to get a real chance, but the shot from 20 meters is exactly at the fists of the goalkeeper. After that Aalen still created a couple of half-decent chances, but failed to score. To all there it was absolutely clear, these teams could play for another couple of days, but wouldn’t score. I was rather relieved when the referee finally blew the final whistle. 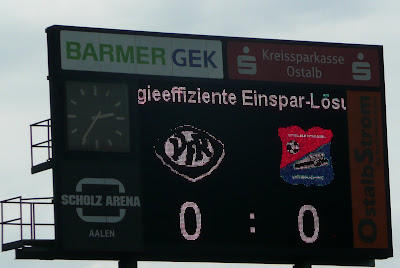 VfR Aalen is a small team that hovers between professional and amateur level. Despite it’s pretty, modern stadium, it has a small support base. It definitely is among the less interesting teams in German football.
Posted by Grondhopper at 8:59 PM