As soon as we moved to Plainfield, just outside of Indianapolis, we noticed that Indy is crazy about its Colts. Everywhere you go you see men, women and kids wearing blue-white gear. As I got more and more into the NFL, while remaining loyal to college football too, I couldn’t resist the Colts temptation and became a fan. While the fantastic season did help – before the Broncos game the Colts were 12-0 – it was the heroic comeback against the hated New England Patriots on 15 November 2009 that sealed the deal. However, being a Colts fan in the Indianapolis area can be quite frustrating, as all games are sold out virtually before the season starts. And tickets through scalpers are expensive. In the end, M. treated me to our first Colts game for Christmas, buying two tickets for $200 each (!) on eBay. 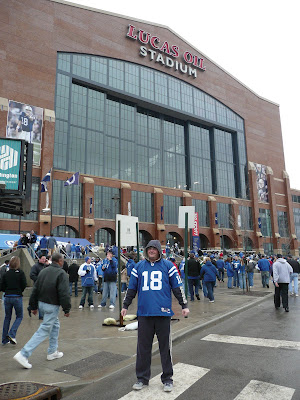 We parked the car in the center of town and walked to the stadium, surrounded by the blue-white army. The massive Lukas Oil Stadium stands just outside of the lively part of the city center and is one of its key landmarks. Excited we entered the stadium and could hardly believe our eyes. 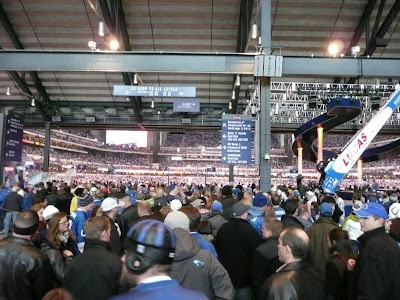 From the inside the Lukas Oil Stadium is unlike anything I have ever seen. With the roof closed it is a gigantic indoor arena but with the atmosphere of an outdoor stadium. Absolutely amazing! Opened only in August 2008, it can hold 63.000 – while not impressive compared to many college football stadiums, the setting is much more comfortable and the acoustics are phenomenal. Moreover, the $200 were well spent, as our seats were absolutely fantastic. This is a picture without zoom! 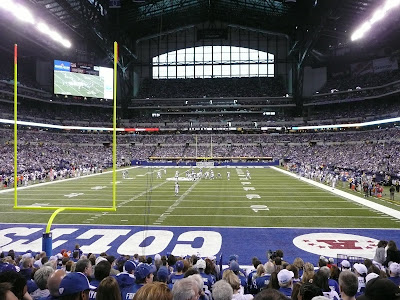 Obviously, nothing could be started without the obligatory national anthem. And, as Indiana is definitely among the more patriotic states, this was combined with rolling out an absurdly large American flag, spanning the whole field. 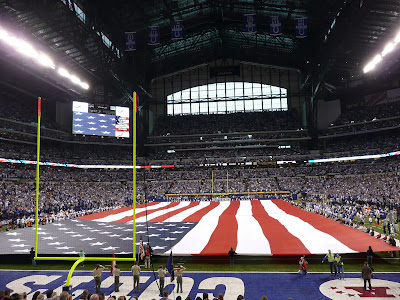 In the pre-game tv show, most pundits favored the Colts, but expected a tight game against the Broncos, who are still playing for their division championship or a wild cart for the play-offs. The Colts have already clinched the AFC South division, but would get play-off home game advantage if they would win this game. And they started like possessed. Within a couple of minutes they were 1st and goal. After two attempts, Payton Manning throws and…. touchdown Colts!

With 7-0 up, the defense was putting the pressure on the Broncos offense and within seconds the Colts were back in possession. Again the offense showed its strength and within minutes it was 14-0, still in the first period. In fact, shortly into the second period the Colts were up 21-0 and the Broncos had hardly had a first down. What power! Unfortunately, that was also the extent of the Colts offense. Fortunately, the Broncos offense wasn’t that much better and, more importantly, the Colts defense played fantastic. 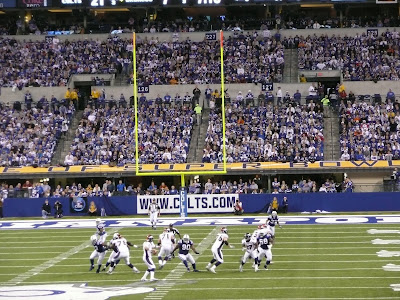 In the second period the Broncos finally score a touchdown, making it 21-7, while the Colts increasingly fail to get a first down. The third period is even worse, with Manning throwing his second and third interception of the game (!), and the Colts scoring virtually no first downs. It is only the defense that keeps them in the game. 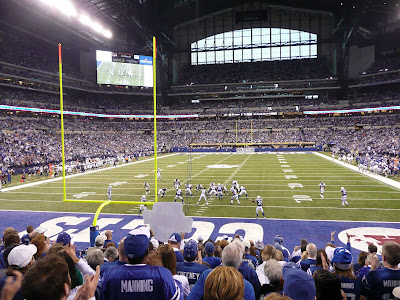 Like the other Colts fans around me, I am not so much worried about losing the game, but rather increasingly frustrated by the extremely poor performance of the offense in general, and Manning in particular. In the fourth period the Broncos score a field goal and a touchdown, coming back to 21-16.


This finally wakes up Manning and the offense, who with some difficulties score their first first down in ages. This awakens the crowd too, who are again starting to cheer and shout for their offense. As so often this season, the Colts (and Manning) come through when it is really needed, and they run out the time as well as score a last touchdown: 28-16 and game over. 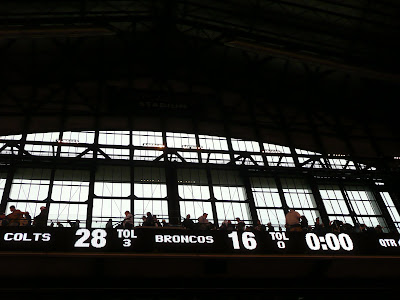 While I am no fan of commercial use of religion in American sports, I must admit that I did like what I saw after the game. Various players of both teams came together in the middle and prayed together in a circle. It seemed sincere. 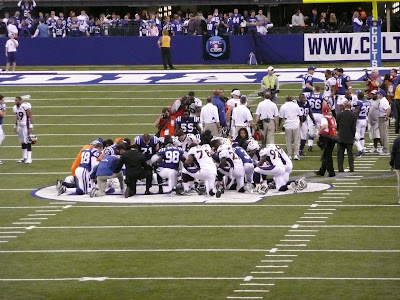 While I am far from objective, the Colts are a must see for any (American) football fan! Even when they play bad (at least offensively), as today, they are a powerhouse with stars like Manning, Wayne, Addai, Clark, and Freeney. Moreover, Lukas Oil Stadium is worth a visit by itself. What an amazing sports arena. I cannot wait to go again! Perhaps for the play-offs?
Posted by Grondhopper at 12:47 PM